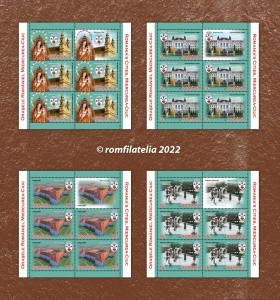 Situated in the middle of the Ciuc Basin, Miercurea-Ciuc was established at the crossroads of two important commercial routes, next to the place where the traditional weekly fairs were held in the past, and in the neighborhood of settlements such as Somlyó, Taploca and Zsögöd, which already existed in the 12th–13rd centuries.

In 1879, Miercurea-Ciuc became the residence of Ciuc County. The construction of the railway in 1896 and the relocation of the Roman Catholic High School from Sumuleu Ciuc to Miercurea-Ciuc in 1910, led to a rapid economic and cultural development, which gradually led to the development of the civic character of the city.

The Franciscan Church from Sumuleu Ciuc

The Franciscan monks who settled down in Sumuleu Ciuc, in the first half of the 14th century built their church and monastery between 1442–1448. From the very beginning they taught at the primary and secondary level, wrote oratories and masters which they presented, leaving to us a legacy, a tradition that still lives.

The construction of the present Baroque church began in 1804, using the stones of the demolished old Gothic church, based on architect Schmidt Konstantin’s projects and were finished in 1876 with the completion of the interior furniture.

The statue of the Mother of God

The most valuable treasure of the church is the statue of the Mother of God set behind the main altar. The statue was carved from lime wood at the beginning of the 16th century (1510–1515) in Renaissance style. With a height of 2.27 m, this is the highest statue of the Holy Virgin all over the world. It represents the Mother of God as the Woman clothed with the Sun: under her feet is placed the earthly globe on which the moon’s sickle appears and wears a twelve-star crown. The statue is considered miraculous, and in the spirit of the ancient veneration of the Holy Virgin in this region, stands at the center of the Pentecostal Pilgrimage.

The Roman Catholic Gymnasium was founded in the middle of the 17th century under the patronage of the Franciscan monks in Sumuleu Ciuc. The idea of moving of this educational institution to Miercurea-Ciuc emerged at the end of the 19th century. The foundation-stone was laid in 1909 and the new building of the school – one of the most fascinating in Transylvania – was finished in 1911. At the inauguration ceremony held on the 5th of June 1911, the religious service was celebrated by the bishop Majláth Gusztáv Károly, founder of several schools in Transylvania, who supported the cause of moving of the institution and carefully followed the entire process.

In the central part of the high school’s building there is a chapel decorated with three lead-glass windows, the middle one of which represents Virgin Mary with the Savior in his arms, the one on the left represents St. Stephen (King Stephen I of Hungary), and on the right Saint Emeric (The Prince Emeric, the son of King St. Stephen I).

At present, the building hosts two prestigious high schools, both of them teaching in Hungarian language: the Roman Catholic Theological High School Segítő Mária (since 1991) and the actual National College Márton Áron. The latter bears since 1990 the name of the famous bishop of Gyulafehérvár.

The fortified castle is the oldest building of Miercurea-Ciuc. This edifice with bastions was built in Renaissance style in 1611 on the orders of Hidvégi Mikó Ferenc, vice-captain of Ciuc, based on the projects of one of the Italian architects – probably on one belonging to Giacomo Resti – who worked in Transylvania during the reign of Prince Bethlen Gábor.

The construction of the castle, with the surface of 75×70 m and sqauare shap,e ended in the 17th century. Since 1970, the Mikó Castle hosts the Szekler Museum of Ciuc, an institution whose main purpose is to research, process, preserve and present the cultural heritage of Ciuc Basin. In addition to its scientific role, the Szekler Museum of Ciuc is also an important objective of tourism in the region: permanent exhibitions present the history of the Mikó Castle, the traditional way of life of the locals, the Franciscan typography from Sumuleu Ciuc and several restored sacred objects. The latest permanent exhibition which presents the history of Miercurea-Ciuc was opened in 2018.

The winter period with snow and ice lasting for several months has made it possible for Miercurea-Ciuc to become the home of winter sports. With over 90 years of ice hockey history it’s no coincidence, that hockey has become the most popular sport in the city. 1929 is the year when ice hockey took it roots in Miercurea-Ciuc. The founders of the first team (Miklós Gyula, Czáka István, Vákár Lajos) while watching a motion picture of ice hockey from that time said “We could do that too!”. According to historical sources, the team’s first home matches were probably played on the 24–25th of January 1931.

The centre of today’s ice hockey is the Vákár Lajos Ice Hall, named after the sportsman, who introduced and practiced ice hockey and thanks to whom the sport was able to take it roots here. It is the home of the Sport Club Miercurea-Ciuc team, which is the emblematic ice hockey team of our city and of Szeklerland. The team’s record includes many victories, titles and medals won at national and international championships.

This postage stamps issue was accomplished with the support of the representatives of the City Hall of Miercurea-Ciuc. 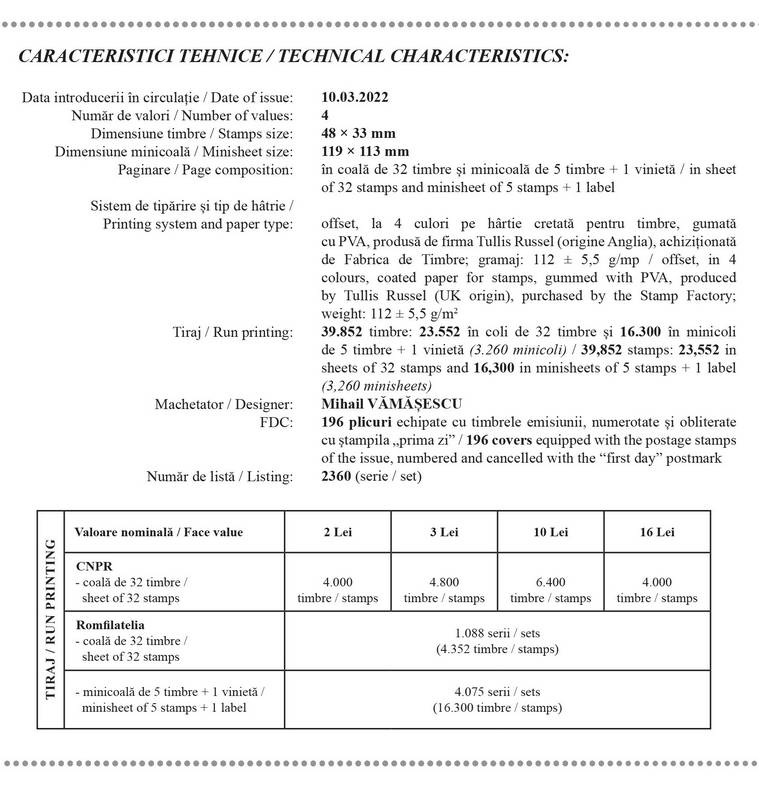