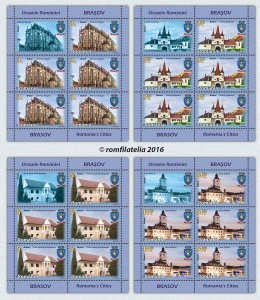 The first documentary attestation of Brasov is in 1235 under the name of Corona.
In the Middle Ages, Brasov earned an unmatched reputation in South East Europe through its Transylvanian Saxon craftsmen.
Coming as a continuation of what the city of Brasov stands for in terms of culture and architecture, Romfilatelia included it in the postage stamp series Romanian cities.
On the stamp with the face value of 3 lei is illustrated the Black Church, a Catholic church dedicated to St. Mary, which was built between 1383 and 1477 and is the largest Gothic place of worship east of Vienna, the most important architectural monument in Brasov and the largest house of worship in Romania (length approx. 90 meters, height of the tower at the cross 65 meters). It was destroyed and became Black after the great fire of 1689.
The Black Church is famous not only by its size but by the fact that it holds the largest collection of Oriental carpets in Europe, dating from the 15th and 16th centuries (except Turkey), the largest mobile bell (6 tons) and the largest mechanical organ in Romania (the Buchholz organ, built in the early Romantic period, about 4,000 pipes and 76 registers).
Illustrated on the stamp with the face value of 3.30 lei is Catherines Gate.
Until the first half of the 19th century, Catherines Gate was the only entrance to the Brasov fortress from Schei. It is one of the most representative monuments of the Transylvanian Renaissance style architecture.
The exterior tower is the only element preserved of the fortified medieval gate, which formed a long rectangle about 70 m which came out with approx. 50 m in front of the precinct walls, built between Weaver and the Blacksmith Bastions, protected during that age by moats and ponds.
The First Romanian School is illustrated on the stamp with the face value of 5 lei.
In the Romanian tradition, together with starting the construction of the St. Nicholas church in 1495, an Orthodox school was founded as well. Romanians training was necessary including for those in the city administration, which paid priests for the translation and drafting of official correspondence in the Romanian and Slavic languages.
At the schools printing press, during the 1556 – 1588 period, Deacon Coresi and other collaborators printed the first books in Romanian, certifying the definitive victory of the Romanian language. At the Romanian school in Scheii Brasov were printed the first chronic with a Romanian topic (1628 – 1633), the first book of grammar (1757) and the first Romanian calendar almanac (1731).
The First Romanian school museums building keeps the Baroque style from the changes that have been made in the 1760s.
The stamp with the face value of 14.50 lei illustrates the Council Hall.
Medieval chronicles mention more changes in the Council Halls architecture and various purposes for its rooms. In 1521 we have the first mention of the prison. In 1528 a new tower was built with four turrets in the corners. In 1608 the clock tower was repaired. The Council Halls tower was also the trumpeters tower, because the guard of the tower would blow the trumpet every hour.
The Council Hall was destroyed by the great fire of 1689 and was rebuilt in 1691, but the major architectural changes were made after 1770. In 1774 a bell was poured, that rings every quarter-hour and the clock mechanism was installed. The restoration works lasted until 1778. The last significant change was carried out from 1909 to 1910, when the onion shaped roof was replaced with a pyramid shaped one with colored tiles.
The city administration was moved from the Council Hall only after 1876.
Currently, the Brasov Council Hall houses the Brasov County History Museum. In the exhibition halls of the museum over 3000 pieces present the historical identity of Brasov County from prehistoric times and antiquity to the present.

Romfilatelia thanks the Brasov City Hall, the Brasov County History Museum, the First Romanian School Museum of Brasov and Mr. George Avanu for the documentary support granted in the creation of this postage stamp issue. 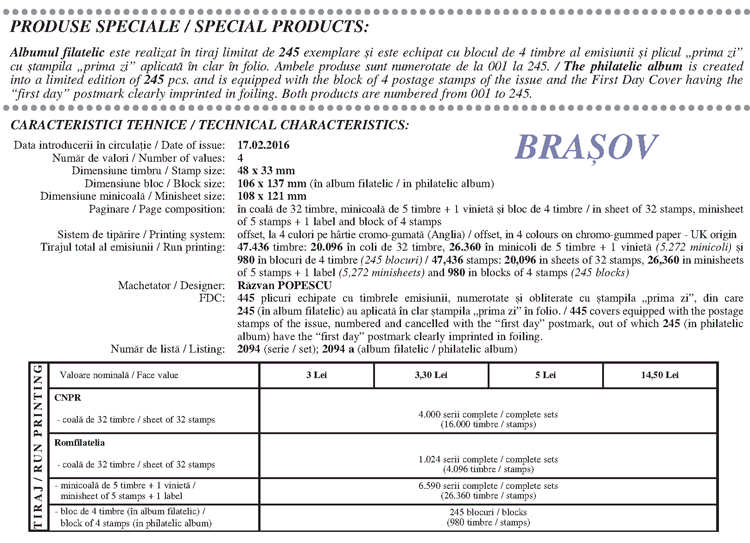