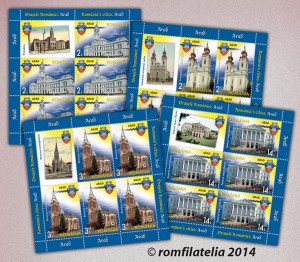 The Administrative Palace (the City Hall) of Arad, illustrated on the postage stamp with the face value of lei 2.00, hosts The City Hall and the Institution of the Prefect, being built between1872 and 1876, based on the blueprints of architect Ödön Lechner fromBudapest. Due to financial constraints, the building’s design was later modified by architect Pekár Ferenc, fromArad.

Belonging to the eclectic current, the building combines the Flemish Neo-Renaissance style with that of the late Medieval city halls. U-shaped, its 54 metres tall tower houses a clock brought fromSwitzerlandin 1878.

The Old Orthodox Cathedral, depicted on the stamp with the face value of lei 2.10, is an example of classic Neo-Baroque, more befitting to the Western church of the 19th century architecture style, rather than that of contemporary orthodox churches.

Having the “The Birth of St. John the Baptist” dedication, the cathedral was built in Baroque style, between 1862-1865, following the drawings of the architect Antal Czigler, the son.

The building reveals itself in a club shaped plan, with an over-wide narthex as a result of its flanking by two bell towers.

The two towers, conferring grandeur to the building, were heightened in 1904. They both have a horologe on each side.

Until 2009, the cathedral was the seat of the Episcopal Chair of Arad, Ienopoli and Halmagiu.

The Evangelical-Lutheran Church, presented on the stamp with the face value of lei 3.60, known also under the name of “the Red Church”, due to its exterior finish in decorative redbrick, was built between 1905-1906 in a Neo-Gothic style, after the blueprints of architect Lajos Szántay, from Arad.

The main tower stands 46 metres tall. On each of its sides, there is a horologe, with a central mechanism transmitting electric impulses to them.

At its inauguration, the church had three bells, cast at the Hönig foundry inArad. However, during World War I, authorities decided to melt two of them into cannon shells.

The “Ioan Slavici” Classical Theatre, illustrated on the stamp with the face value of lei 14.50, is one of the most impressive buildings inArad.

The theatre was built in a Neoclassical style between the years1872 and 1874, and was most likely based on the drawings of Gyözö Czigler.

The three-storey hall of the theatre has a capacity of 1200 seats, and was lit with a 36-arm chandelier, as the one of the Vienna Opera House.

The theatre was inaugurated on September 21st, 1874, in the presence of the Austrian Emperor Francisc Joseph Ist himself.

Both in 1883 and 1955, the building was ravaged by fire, being totally rebuilt each time. After the second fire the theatre underwent significant changes. The main entrance was moved on the boulevard-side and the main hall was shrunk, a studio being created on the second floor.

We thank the management of the Arad Museum Complex for its support granted in the accomplishment of this postage stamps issue. The photographic support was provided by Delia Hugel, Florin Hornoiu and B&B Helios photo studio. 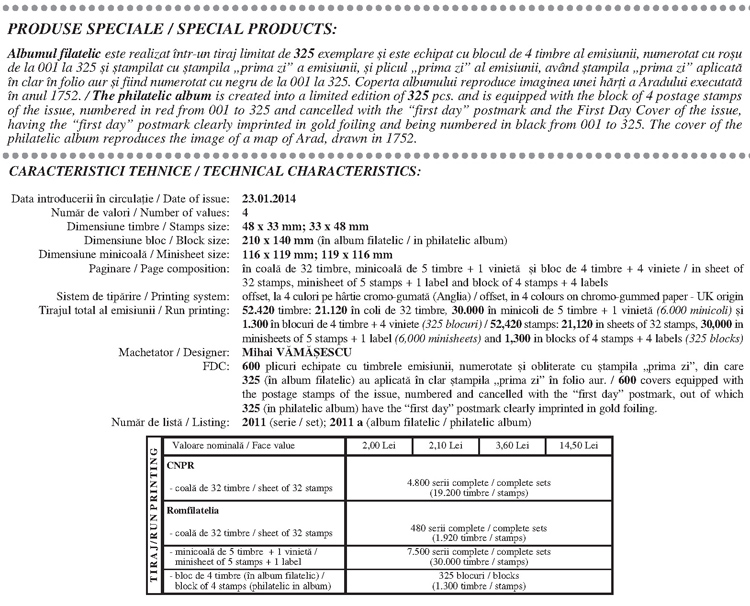