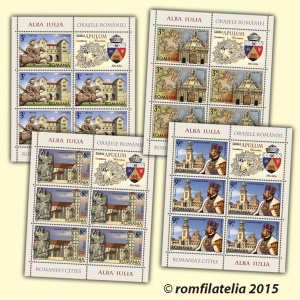 Traces of human habitation were attested within the boundaries of the city of Alba Iulia, dating back to the Neolithic, proving Romanias millennial history.
The philatelic issue that Romfilatelia proposes to collectors is dedicated to the citadel city of Alba Iulia, the most important spiritual and cultural center of Transylvania.
On the stamp with the face value of lei 3.00 is illustrated the fort of the Roman Legion XIII Gemina. It had an area of about 20 hectares and hosted the only legion that was stationed in Dacia throughout the Roman domination.
Around it was formed a civilian settlement which was raised to the rank of municipium in the time of Septimius Severus (193-211) and became Colonia Nova Apulense in the time of Traianus Decius (249-251).
Thanks to the economic boom, it became the richest city in Roman Dacia ever since the late 2nd century, and received the epithet Chrysopolis (golden city, town rich in gold).
The Third Gate (Eastern gate) also called Carols Gate is illustrated on the stamp with the face value of lei 3.30.
It is distinguished by sculptural forms (ronde-bosse and reliefs), distributed on both fronts, Eastern and West. The monument, dominated by the equestrian statue of Emperor Carol VI, is, by the representations on panels above the pedestrian side entrances, a homage to marshal Eugene of Savoy for his contribution to the expulsion of the Turks from Central Europe and for his involvement in raising the bastion fortress Alba Carolina.
Alba Carolina bastion fortress was built between 1715 and 1738 on the place where before, there were the Roman fort and later on the medieval fortress.
The fortress was built with the labor of over 20,000 serfs, according to plans by the architect Giovanni Morando Visconti. The construction was built in the Vauban style and comprises seven bastions and various other elements of fortification. It is equipped with six gates, four of them as well as the bastions being decorated in Baroque fashion and representing the most significant ensemble of fine Transylvanian Baroque.
The Saint Michael Cathedral is illustrated on the stamp with the face value of lei 8.10.
It was built in the 11th century, but from this first phase of construction nothing was kept. The second phase was built between 1247 and 1291, almost the same period as Notre-Dame in Paris.
The third stage of construction of the cathedral took place between 1320 – 1356 and later on, Iancu de Hunedoara made it his family necropolis, here being buried alongside his son and brother. In the following centuries, the cathedral housed the tombs of the princes of Transylvania.
The cathedral is the most important medieval architectural monument in Transylvania, within it ranging all the architectural styles of the European Middle Ages (Romanesque, Gothic, Renaissance and Baroque).
The Coronation Cathedral is found on the stamp with the face value of lei 9.10, a symbol of the Union of all Romanians from the historical provinces of the country.
The cathedral was built in record time, in just nine months, from 1921 to 1922, becoming the place of coronation for King Ferdinand and Queen Maria, on October 15th, 1922.
The cathedrals architecture, in Neo-Romanian style, created by Victor Gheorghe Stefanescu, is close to that of the Princely Church in Targoviste.
It has the form of a Greek cross, with an enclosed porch that leads into a rectangular narthex. The nave is impressive by its height and is dominated by a dome supported by four octagonal pillars made of Moneasa marble. The bell tower is 58 m tall.
The Cathedral bears the name of the holy Trinity and is dedicated to the Archangels Michael and Gabriel, the interior painting being done by Costin Petrescu.
Alba Iulia symbolizes, perhaps best, the ideals of identity and unity of the Romanians kept in the pages of a millennial history.

Romfilatelia thanks the Alba Iulia City Hall for the documentary support granted in the creation of this postage stamp issue. 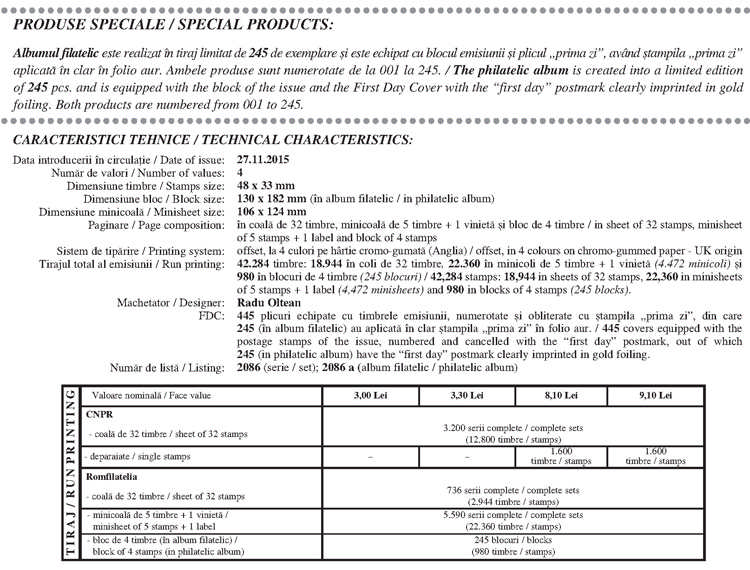