Romfilatelia resumes the issues dedicated to the Romanian literature by introducing into circulation the postage stamp issue Romanian writers and their collection pages consisting of four stamps that reproduce the portraits of four writers, along with a small fragment of their work and their signatures.

The stamp with the face value of lei 3.30 reproduces the portrait of writer Ion Creanga (1837-1889) along with the introductory paragraph of the book Childhood Memories:

“I don’t pretend to know what other people are like, but for myself, I seem to feel my heart throb with joy even to this day when I remember my birthplace, my home at Humulesti, the post supporting the flue of the stove, round which mother used to tie a piece of string with tassels at the end of it, with which the cats played till they dropped exhausted, the flat ledge of the stove that I used to cling to when I was pulling myself up and learning to walk…”.

The stamp with the face value of lei 4.50 illustrates the portraitof Vasile Alecsandri (1821-1890) together with the first two verses of the poem The Dance of Unity:

“Let’s join hands,
Those with Romanian hearts
To go round the dance of brotherhood
On Romania’s land!

May the bad seed disappear
May the enmity in the country be gone
Let there only be
Flowers and kindness among us!”

Poet, playwright, folklorist, politician and founding member of the Romanian Academy, he activily contributed to the writing of the Romanian Principalities’ history. Alecsandri is known in the Romanian literature mainly for his “pasteluri”, lyrical poems evoking the so called domestic nature, namely the usual framework of a patriarchal, idyllic lifestyle.

The stamp with the face value of lei 7.60 reproduces the imageof poet George Cosbuc (1866-1918) together with two verses of the well known poem Life’s fight:

“Children ignore what they really want: / Crying is their innocence.

But the most cowardly thing in the world / Is a moaning man.

Nothing more derisory as cry / In the eyes of a fighter.

A fight is life; so fight / With the love for it, with nostalgia”.

His poetry, which depicts nature, rural life and the Romanian soldiers’ bravery during the 1877’s fights, belongs to the national cultural heritage, his creation placing him among the classic authors of Romanian literature His poems fall into a unified vision, forming an epic-lyric monograph of the Romanian village.

The stamp with the face value of lei 8.10 illustrates the poet George Bacovia (1881-1957) and the first two verses of his poem December:

“See how “December” is snowing …
Look to the windows, my dear –
Tell them to bring in more embers,
And let me hear how fire is roaring.

Push the armchair near the stove
I’m listening the snow storm by the chimney,
Or my stormy days – it’s the same –
I would like to learn their symphony.”

Educated by the French school of literary symbolism, the poetry of Bacovia is the most eloquent and long-lasting expression of local symbolism. Bacovia is the poet of endless autumns, of winters (“Neurosis”) that give the feeling of the end of world, of sweltering heat (“July”), of neurotic springs (“Spring nerves”).

The labels of the souvenir sheets reproduce the images of four works of art (busts sculptures and medallions) illustrating the four Romanian writers. These are creations of Romanian artists belonging to the heritage of the National Museum of Romanian Literature in Bucharest: Ion Creanga (medallion made by Pavel Mercea), Vasile Alecsandri (bust sculpture made by Spiridon Georgescu), George Cosbuc (bust sculpture by Ion Cosan) and George Bacovia (bust sculpture by Milita Patrascu).

Romfilatelia thanks the National Museum of Romanian Literature for the support granted in the accomplished of this postage stamp issue. 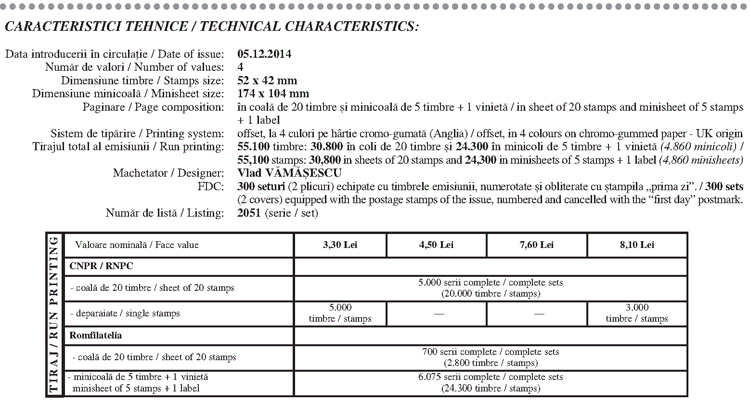