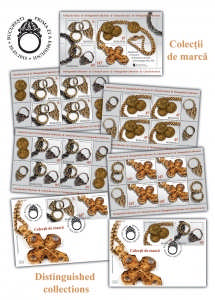 The most recent philatelic project of Romfilatelia takes stamp lovers into the past, on a journey into the world of the 10th – 11th centuries, inviting them to discover the beauty and craftsmanship of the pieces of treasure which are part of the National Museum of Romanian History’s heritage.

The National Museum of Romanian History is a true landmark of the national historical and cultural heritage, hosting the most famous treasures of the Romanian people, pieces of great archaeological value, gathered in notable collections and exhibitions. Moreover, the heritage of the National Museum of Romanian History was included in the philatelic patrimony ever since 1971, a year after the institution’s establishment, the collection pieces exceeding the country’s borders alongside the Romanian stamp.

The postage stamp issue Distinguished collections, the latest collaboration between Romfilatelia and the National Museum of Romanian History, thereby continues the successful partnership between the two institutions, the stamp reiterating its role as promoter of national history and thus proving that philately cultivates values and is the witness and messenger of Romanians’ heritage.

The 4 stamps of the issue Distinguished collections illustrate jewels and coins discovered at Dinogetia, one of the important settlements of the Lower Danube, region which along the 11th century knew a flourishing development, also highlighted by the archaeological excavations. The postage stamps with the face values of lei 3.00, lei 4.50,
lei 9.10 and lei 14.50 reproduce pieces found in 1950 and 1954, belonging to the heritage of Dinogetia, such as:
the reliquary cross from Dinogetia, gold and silver rings, gold coins and gold links.

They come to emphasize and complete the joint mission of the two partner institutions namely, that of bringing to the public’s attention, in new and original ways, the aspects related to our national identity, how we formed and consolidated as people and nation. This miniature work of art, the stamp, thus becomes a real presence in our existence and that of future generations, attracting and persuading through the image it illustrates and its significance nationally and internationally.

Technically, the issue is completed by a set of two first day covers, and as page composition were used the sheet of 20 stamps, the minisheet of 4 stamps + 4 labels and the block of 4 stamps + 2 labels.

Starting with Friday, March 20th, 2015, the postage stamp issue Distinguished collections will be available in all Romfilatelia shops in Bucharest and countrywide.

Romfilatelia thanks the National Museum of Romanian History for their documentary support granted in the achievement of this postage stamp issue.