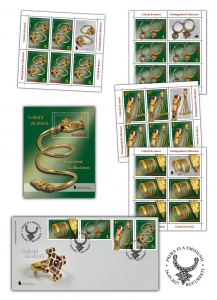 “Beauty is worse than wine, it intoxicates both the holder and beholder”(Aldous Huxley)

Romfilatelia invites you to explore the fascinating world of ancient jewelry by introducing into circulation the postage stamps Distinguished Collections, comprising of four face values and a souvenir sheet.

This issue is available starting with Friday, May 27th 2017 in Romfilatelia shops from Bucharest, Bacau, Brasov, Cluj-Napoca, Iasi and Timisoara.

Ornaments have always been part of human culture, as a universal form of expressing the esthetics, power, magical representation or symbol of the social differentiation.

Jewels made from shells, stone and bone survives from prehistoric times. It is likely that from an early date it was worn as a protection from the dangers of life or as a mark of status or rank.
The discovery of the metal processing techniques was an important stage for jewelry craftsmen, their products becoming more and more sophisticated and stylish over time.

The purpose for which we wear jewelry remains, in general, the same: to create a state of well-being but also to communicate it to those around us.

This philatelic project takes the stamp collectors on a journey in time through symbolic images of objects belonging to the patrimony of the National Museum of Romanian History.

The stamp with the face value of Lei 4 has is illustrated with two earrings (7th century AD), discovered at Cosoveni, Dolj county. Although not part of the same pair, both earrings were created from gilded silver, using the same techniques of pouring, beating, granulation, melding and guiding.

Discovered in the archeological site of Apahida, Cluj county, the bell pendants (5th century AD) ennoble the stamp with the face value of Lei 4.50. They are made of gold and garnets, and each one has an animal head, crowned with a prism with garnet faces. The bells are attached by thin gold chains.

The pair of earrings represented on the stamp with the face value of Lei 8 was discovered in a grave in Velt village, Sibiu county. Being from the 5th century AD, they illustrate a more elaborate craftsmanship, the pendants of the earrings having fourteen sides, ornamented with triangular or square garnets. The pattern is further adorned with a gold pearl thread that surrounds each of the square garnets and the hole where the earring loop meets the pendant.

The stamp with the face value of Lei 12 illustrates a multi-spiral bracelet from Sarmizegetusa Regia, Hunedoara country.

Estimated to be from the 1st  century BC, this gold bracelet weighs nearly one kilogram. The heads are represented by stylized snakes, the flattened parts being decorated with the fir tree motif and a medial line of golden pearls.

The souvenir sheet of the issue presents a tubular bracelet, discovered in the hoard of Cucuteni-Baiceni, Iasi county, on the stamp with the face value of Lei 15. The 4th century BC bracelet is gold, worked in the form of a spiral with heads formed from a protome (animal-shaped figure forming an ornament on a metallic or ceramic object) in the form of a ram’s head.

This issue is completed by a first day cover and as composition were used the sheet of 32 stamps and the minisheet of 5 stamps + 1 label.


Romfilatelia thanks the National Museum of Romanian History for the documentary support given for the creation of this postage stamp issue.