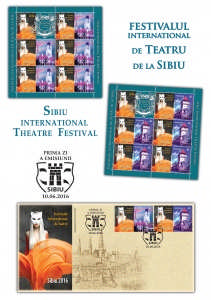 Taking place between 10-19 June 2016, the Sibiu International Theatre Festival, the most important theatre and performing arts manifestation in Romania, supports a creative dialogue at a European and international level and promotes theatrical creations of the highest quality.

Associating with the festival’s mission, which is to promote culture and creative art, the postage stamp certifies one more time its role as a cultural ambassador worldwide, representing this artistic manifestation through a thematic issue, suggestively entitled the Sibiu International Theatre Festival, which can be purchased starting with Friday, June 10th, 2016, in Romfilatelia’s stores in Bucharest, Bacau, Brasov, Cluj-Napoca, Iasi and Timisoara.

In 1993, a group of the “Radu Stanca” Theatre of Sibiu, aided by Romanian cultural personalities and theatre personalities from Romania and abroad, has the initiative to revive the city’s lost sparkle by organizing a theatre festival. Thus, the festival’s first edition took place also in 1993, in March, in a city covered in snow, where the attending guests wore garlic in their pockets to ward off vampires.

Over 20 years old, the Sibiu International Theatre Festival contributes substantially to the consolidation of Romania’s prestige internationally, leading successfully to the development of the cultural tourism phenomenon. Acknowledged for its important value and artistical significance, the festival was awarded in 2015 by the Ministry of Foreign Affairs of Japan, for its contribution to the development of the cultural relations between Japan and Romania.

This year’s edition, the 23rd one, has the slogan Building trust and reunites 16 show sections, with 452 performances taking place over the 10 days of the festival and 65.000 spectators, who have the occasion to be part of a national and international benchmark cultural event.

The two stamps of the issue, with the face values of lei 5 and lei 8, refer to graphic elements of the festival’s poster (the masked character) and also to the symbols of Sibiu’s architecture (Council Tower, Potter’s Tower). The festival’s logo is also incorporated in the graphics of the minisheet’s labels.

The stamps are completed by a first day cover, and as page composition were used the sheet of 32 stamps and the minisheet of 5 stamps + 1 label.

Romfilatelia thanks the organizers of the Sibiu International Theatre Festival and photographer George Avanu for the documentary support granted in the creation of this postage stamp issue.