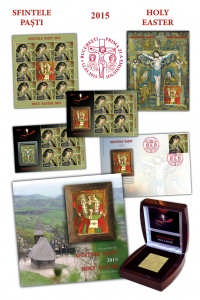 “Therefore we have been buried with him by baptism into death, so that, just as Christ was raised from the dead by the glory of the Father, so we too might walk in newness of life;” (Romans 6:4)

The Easter holiday, the greatest Holy Christian holiday, as well as the greatest holiday of the human soul, symbolizes the passage from death to life, from the earthly to the heavenly, the liturgical celebrations being totally special – the beauty of the songs, the priests’ bright robes, the crowded churches filled with believers that carry candles, all of these expressing the joy and light of those who announce and witness: Christ is risen! Truly He is risen!

As this great holiday approaches, Romfilatelia dedicates the postage stamp issue Holy Easter 2015 to all believers, marking on the Romanian stamps two significant moments from Jesus Christ’s life – the Crucifixion and the Resurrection.

The two stamps of the issue invite you to stop at Nicula, in Ardeal region, in the heart of Transylvania, to visit one of the oldest monastic settlements and an important centre of spirituality and culture, known both for its pilgrimages to the Miracle – Working Icon, and for the painting of icons on glass.

The stamp with the face value of leu 1.00 illustrates Christ’s sacrifice, namely the iconographic image of the Weeping Mother, in a manner specific to the Lancram painting centre in Sebes county. The icon dates back to the mid-19th century and is currently found at the Nicula Monastery.

On the stamp of the souvenir sheet, with the face value of lei 9.10, is reproduced the icon of the Resurrection of Jesus, painted in the Nicula centre, in the first half of the 19th century and belonging to the Transylvanian Museum of Ethnography. The border of the souvenir sheet presents another iconographic representation of the Lancram-Sebes painting centre, the Crucifixion icon, dating back to the middle of the 19th century. Today, it is held in the collection of the Nicula Monastery.

The icons depicted on the stamp and souvenir sheet of the issue are valuable compositional representations, whose significance transcends the barriers of time and space, and whose artistic layout emphasizes the mystery of the Easter Feast. The special products of the issue, created in an original graphic and artistic manner, come to complete the philatelic vision on this great holiday.

The philatelic album is created into a limited edition of 411 pcs. and is equipped with the special block of two postage stamps of the issue and the First Day Cover having the “first day” postmark clearly imprinted in gold foiling. Both products are numbered from 001 to 411.

The philatelic product (the gold plated silver stamp) is an exclusive product, based on an original concept by Romfilatelia, created into a limited edition of 365 pcs. The gold plated silver stamp, replica of the postage stamp with the face value of leu 1.00, is accompanied by the philatelic booklet containing the “complete series” block of the issue, an element created in philatelic premiere and numbered from 001 to 365.

The issue is completed by a first day cover and two postal stationeries, and as page composition were used the sheet of 28 stamps, the minisheet of 8 stamps + 1 label, the minisheet of 4 stamps (2 models), the perforated souvenir sheet and two special blocks – the block of 2 stamps (in philatelic album) and the special block “complete series”, found in the philatelic product.

Starting with Thursday, March 12th, 2015, the postage stamp issue Holy Easter 2015 will be available in all Romfilatelia shops in Bucharest and countrywide.

Romfilatelia thanks His Grace Andrei Andreicut, Archbishop of Vad, Feleac and Cluj and Metropolian of
Cluj, Maramures and Salaj, Archimandrite Nicolae Moldovan, abbot of Nicula Monastery, Cluj county,
Mr. Tudor – Alexandru Salagean, manager of the Transylvanian Museum of Ethnography and Mr. Ioan Teglas, photographer, for their support in the achievement of this postage stamp issue.

Also, Romfilatelia thanks Father Siluan Timbus for the documented text offered for the materialization of this philatelic project.