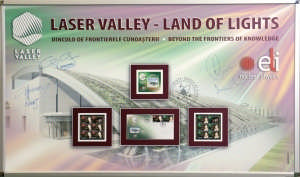 On Tuesday, October 11th, 2016, at Victoria’s Palace, Transylvania Hall, took place the launching of the postage stamp issue Beyond the Frontiers of Knowledge, Laser Valley – Land of Lights. The issue is dedicated to the scientific project of international scope, ELI-NP, the most advanced research infrastructure in the world.

Master of ceremony was the government’s spokesman, Liviu Iolu, who began the formalities by inviting Romfilatelia’s CEO, Ms. Cristina Popescu, to address a few words about the stamp project.

“It is my pleasure to join you today and be part together of a great accomplishment of Romania, with the help of a national symbol, the Romanian stamp”, declared Romfilatelia’s CEO in the beginning of her speech.

“You have to know that the stamp is an innovation. We always try to prove by the technique we have that we are among the countries that mark important events by their own technical means and this fact is important; it means education, it means culture, the stamp is a carrier of messages, promoting innovative actions and projects that are changing the world and deserve to be treasured in the Romanian philatelic heritage.”, continued Ms. Cristina Popescu.

Forwarding the invitation to discover a world beyond the frontiers of knowledge by this project, Ms. Popescu made a brief description of the issue’s three values: ”This stamp issue brings at the forefront two visionary representatives of the scientific Romanian community: Horia Hulubei, creator of the Romanian school of atomic physics and founder of the Institute of Atomic Physics, and Ion I. Agarbiceanu, world renowned physicist and creator of the first Romanian laser. The perforated souvenir sheet of the issue completes the chosen theme, illustrating the layout and design of the project. The issue is a combination of beauty with attractive technical features, the three values depicting graphics elements with insertions visible under UV light, in a simulated reproduction of the laser’s rays.”

The ceremony continued with the unveiling and signing of the philatelic panel by all four officials, the Prime Minister and the European Commissioner dating and marking the issue’s introduction into circulation by cancelling the elements with the first day postmark.

The event ended with brief interventions from the Prime Minister and the European Commissioner, who addressed congratulations for this stamp project to Romfilatelia’s team. “I would like to briefly congratulate and thank Romfilatelia for this great initiative, and also to the staff in charge of what I will call in Romanian the Laser Valley.”, declared Prime Minister Dacian Ciolos.

Pointing a great achievement of our country, Romfilatelia registers a new collection stamp issue in the Romanian national philatelic heritage, while the postage stamp proves, once again, its role as messenger and silent witness of the most important anniversaries and events.