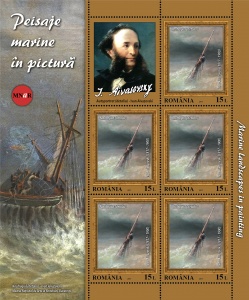 With the latest philatelic issue, Romfilatelia suggests you to admire the beauty of the sea, as illustrated in some of the works belonging to the patrimony of the National Art Museum of Romania.

The issue comprises of four values, with stamps realized in a chromatics that reminds us of the different sides of the sea: quiet, sunny or full of storm.

One of the great Romanian painters who reproduced the sea in his paintings is Nicolae Grigorescu, the painter of the Romanian soul. This year marks the 110th anniversary of the birth of the great artist.

The “City by Sea (Naples)” painting is illustrated on the stamp with a face value of Lei 2.20. It is an oil painting on wood, created between 1873 and 1874, when Grigorescu was on study trips in Italy. So when returning to the country, Grigorescu displayed paintings with the picturesque landscapes in Naples and Rome.

Balchik was and has remained a fascinating place for Romanian art since the first half of the 20th century, Cecilia Cutescu-Storck being among the artists enchanted by the bohemian settlement.

An inspirational place for painters, the small settlement on the Black Sea shore has a history of nobility, thanks to those who represented it in their works. “Balchik” is represented on the stamp with the face value of Lei 2.70 and bearing the signature of Cecilia Cutescu-Storck. It is distinguished by the light, spontaneous and lively manner with subtle colour harmonies that integrate the charm of the place.

Dumitru Ghiata’s works occupy a special place in Romanian modern art and were created from sources that go beyond the concrete. As an artist, Dumitru Ghiata is distinguished by the way he translates each landscape according to light and its changes. The artwork called “Balchik”, so simple in its austerity, releases a profound essence of the image and is illustrated on the stamp with a face value of Lei 8.

Considered the Marine Landscape Master, Ivan Aivazovsky created paintings of the same theme, the sea. Aivazovsky was the one who introduced the marine landscapes in Russian art, making this one of the important moments of the 19th century plastic art history. This year we commemorate the 200th anniversary of the birth of the great painter. One of the paintings of the great lover of the sea, “Shipwreck” is illustrated on the stamp with the face value of Lei 15.

In ultramarine blue tones to shades of green, quiet or full of storm, crystalline or charged and dark, so is the sea rendered in the paintings of Aivazovsky.

Yet Aivazoksi’s marines do not copy nature, they are always rendered in connection with all the other elements, resulting in the veracity of images created.

This issue is completed by a first day cover and as composition sheet were used the sheet of 20 stamps and the minisheet of 5 stamps + 1 label and illustrated border.