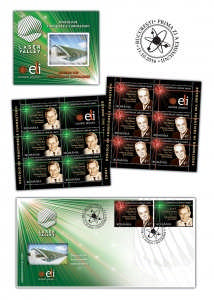 “The best way we can predict the future is to create it.”    USA President Abraham Lincoln

In the neighbourhood of Bucharest, in South-West, over four centuries ago, there was some fertile land, which is said to have belonged to Michael the Brave. A few generations later the land came into the possession of the famous Otetelesanu family – great minds, great patriots and lovers of national culture, so that later on, the house of this family, known as the Otetelesanu Mansion, would become the starting place of the Institute of Atomic Physics – IFA.

Under the management of scientist Horia Hulubei, who was also the first director of IFA, the Institute scored decisive moments not only in the history of national science and technology, but throughout our intellectual history, with accomplishments achieved for the first time and first-hand innovations. Nowadays, this place full of history and culture has opened its doors to a new future, beyond the frontiers of knowledge, making ELI-NP the most advanced research infrastructure in the world, based on photonuclear physics and exceptional performance of a high intensity laser.
To make this scientific project of international scope known to the general public, both national and foreign, Romfilatelia dedicates the postage stamp issue Beyond the frontiers of knowledge, Laser Valley – Land of Lights, inviting collectors to view a world set in a future that passes beyond the current barriers of knowledge. Consisting of three values, the philatelic issue is available starting on Tuesday, October 11th, 2016, at Romfilatelia’s stores in Bucharest, Bacau, Brasov, Cluj-Napoca, Iasi and Timisoara.

The issue’s postage stamps depict the two visionary representatives of the Romanian scientific community:  Horia Hulubei and Ion I. Agârbiceanu.

Thus, on the stamp with the face value of lei 4.50 appears the portrait of professor Horia Hulubei (1896 – 1972), famous scientist and creator of the Romanian school of atomic physics. He is the founder of IFA, and has the merit of training generations of specialists in atomic and nuclear physics, becoming famous by important scientific discoveries.

As the first director of important research institutions, Horia Hulubei had a decisive role in commissioning – for the first time in the country – of a nuclear reactor (the second in Eastern Europe) and a cyclotron, and in recognition of his scientific authority, today, the National Institute of Physics and Nuclear Engineering bears his name.

On the stamp with the face value of lei 8 is presented another exceptional personality of the scientific field, world renowned physicist Ion I. Agarbiceanu (1907 – 1971). The scientist had a remarkable teaching and scientific activity, having the merit of initiating the first Romanian research into the physics of lasers. Thus, in 1962, he successfully produced the first Romanian gas laser (helium – neon type), just a year after its launch abroad.

On the perforated souvernir sheet, having the stamp with the face value of lei 15, are represented the layout and logo of the ELI-NP project, with a design and graphic concept that lead to the idea of future and its shaping by science, research and knowledge.

Both the souvenir sheet and the stamps of the issue have graphic elements, with insertions visible in UV light, in a simulated reproduction of laser’s rays.

The issue is completed by a first day cover and as a page composition were used the sheet of 32 stamps, the minisheet of 5 stamps + 1 label and the perforated souvenir sheet.