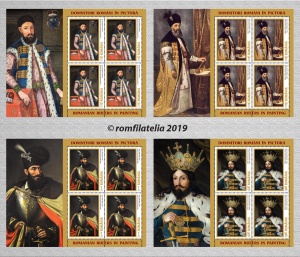 The first postage stamps of the issue of postage stamps with the face value of Lei 1.50, shows the portrait of Constantin Brancoveanu, composed by an anonymous painter at the beginning of the 20th century, a painting that belongs to the patrimony of the National Art Museum of Romania, inspired by a portrait found at The Saint Catherine Monastery from Mount Sinai (1696).

Constantin Brancoveanu was the ruler of the Wallachia between 1688 and 1714, having one of the longest reigns in the history of the Romanian Principalities. Nephew through his mother to the ruler Serban Cantacuzino, he inherited and compounded a considerable wealth, found in the many landmarks related to the Romanian culture and spirituality. During his reign, Wallachia experienced a long period of peace, cultural flourish and development of religious life, leaving behind a large number of monasteries and an eclectic architectural style that bears his name.

The portrait of Grigore II Ghika created by Theodor Aman (1869), illustrated on the postage stamp with the face value of Lei 1.60, is also included in the collection of the National Museum of Art of Romania.

Grigore II Ghica was the ruler of Moldova and of Wallachia in the Phanariot times. Nephew of Grigore I Ghica, he was brought to the throne of Moldova by Nicolae Mavrocordat, after the dismissal of Mihai Racovita. He made his debut with a humane reign, downgrading the taxes set by his predecessor, yet still granting the greatest domains to the Greeks.

The group of dissatisfied boyars, led by Dimitrie Racovita, wanted to overthrow him with the help of the Tatars. But Ghica, helped by the Turks and the Wallachians, rejected them. With the Russian-Turkish war, Moldova was occupied by the Russians, and he was forced to leave the throne.

Michael the Brave’s portrait is one of the historical themed portraits of particular importance in Misu Popp’s potfolio. This work was created as an impetus for Romanians from Transylvania, following the idea of strengthening national unity. Remarkable as a painting, it is superior to Michael the Brave’s portraits by Tattarescu and Lecca. The portrait was created after an engraving by Egidius Sadeler, brought to Romania as a document.

The postage stamp with the face value of Lei 19, graphically depicts the portrait of Stephen the Great, achieved by the painter Constantin Lecca (1830), belonging to the National Museum of Art in Iasi within “Moldova” National Museum Complex. Canonized as Stephen the Great and Saint by the Romanian Orthodox Church, he was the ruler of Moldova between 1457 and 1504. He was the son of Bogdan II and ruled for 47 years, the longest reign in the medieval era of the Romanian countries.

Stephen the Great is considered a leading figure in Romania’s history, endowed with great qualities as a statesman, diplomat and military leader. These qualities allowed him to surpass the times of major crisis, generated either by the military interventions of the neighbouring states, by attempts, internal or backed by foreign support, for his removal from the kingdom. During his reign, Moldova reached the height of its state development, knowing a long period of internal stability, economic prosperity and social tranquillity.

On the set of two First Day Covers of the issue, the painting entitled Michael the Brave in Calugareni, painted by Nicolae Grigorescu (1857), which is currently at the National Museum of Art of Romania, is illustrated. The Battle of Calugareni was part of the Ottoman-Wallachian conflict and part of the Ottoman campaign aimed at replacing Michael the Brave and transforming Wallachia and Moldova into Ottoman provinces. 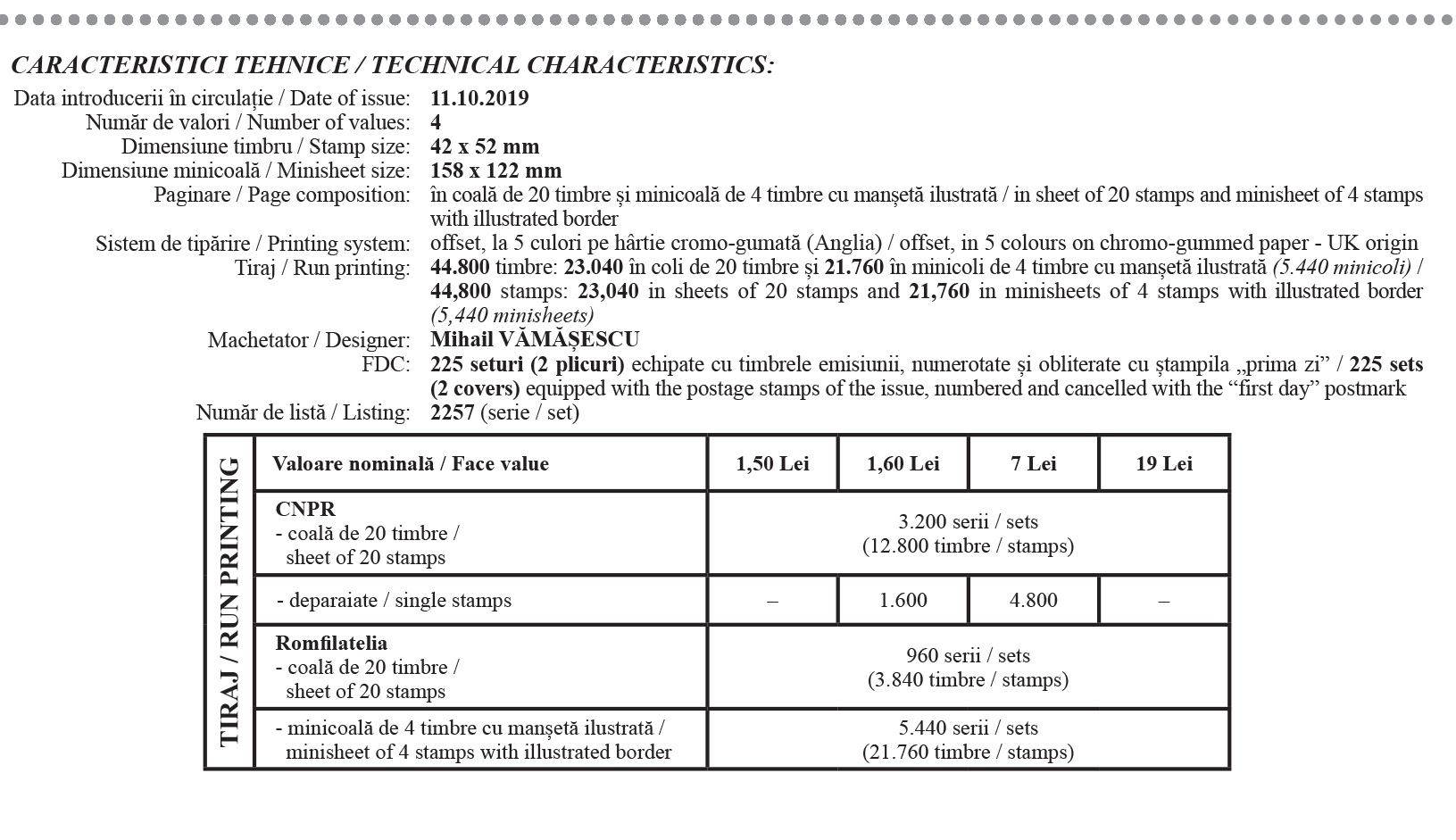