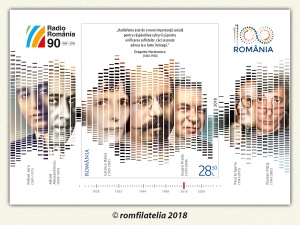 “For the healthy development of our institution, the contribution of all those who work for the progress of this country is needed. One should not think that radiophony is only a matter of entertainment. Radiophony has a social importance much bigger than theatre for the spreading of culture and the unification of souls as it addresses a large number of people and getting even to the remotest hut of a peasant. It will soon become a criterion for the evaluation of the development level of a country.”

Romfilatelia celebrates the first Romanian radiophonic broadcasting by introducing into circulation the postage stamp issue Romanian Radio Broadcasting Company, 90 years of existence. The radio is the promoter and supporter of the Romanian culture and civilization and an important vector in the formation of the civic spirit and community cohesion. The imperforated souvenir sheet of the issue, with the face value of Lei 28.50, illustrates the portraits of some personalities that contributed to the development of national radiophony – Dragomir Hurmuzescu, Eugen Preda, Catinca Ralea, Paul Grigoriu, Mihail Jora, Alfred Alessandrescu and Florian Pittis.

Dragomir Hurmuzescu (1865-1954), who had studied at the University of Bucharest and got a diploma in physical-chemical sciences of the Faculty of Sciences of the University of Sorbonne in Paris, was the founder of Romanian radiophony. In 1926, he made an experimental radio broadcasting station at the Institute of Electrical Engineering of Bucharest. Devotee of the communication via waves, he had founded together with other colleagues, even since 1924, Association of radio broadcasting fellows, which was going to also issue the first Romanian thematic publication – Radiofonia magazine. Dragomir Hurmuzescu delivered lectures in Bucharest at the Romanian Athenaeum and also in other localities of the country (Timisoara, Brasov, Braila, Constanta, Ploiesti) on topics related to the new means of communication. His scientific activity and enthusiasm led to his election in 1928 as president of the first Romanian Radio Broadcasting Company Board of Directors.

The merits of scholar Dragomir Hurmuzescu – a member of the Romanian Academy and corresponding member of the French Physics Society – in the development of national radiophony remain memorables.

A graduate from the Faculty of Trade of the Academy of Economic Studies of Bucharest, and Ph.D. in history, Eugen Preda (1929-2000) worked at the Romanian Radio Broadcasting Company since March 17th, 1950, and in December 1989 he was appointed “provisional authorized agent for the Radio Broadcasting Company”. In the period June 1990 – September 1994 he held the position of General Manager of the Romanian Radio Broadcasting Company and in this interval the whole energy of the journalist Eugen Preda focused on the reorganization of the company. He stood out by his efforts of giving a new publicist vibration by opening wide the gates of the Radio to a large number of journalists. The prestige acquired by Radio Romania – internally and externally – is indisputably connected to the democratic vision of this opinion-maker.

During the same period, Eugen Preda was in the middle of some tense events from Europe and the whole world. He witnessed the civil wars in Yugoslavia and the Republic of Moldova (Transnistria), the Gulf War and the war in Somalia. He operatively broadcast reports from the scene that enjoyed listeners’ appreciation and received numerous awards, his greatest work was the redefinition of the national Radio Broadcasting Company.

Catinca Ralea (1929-1981), a remarkable figure of the Romanian radio, graduated from the Faculty of Romanic and classical languages, majoring in French language and literature (University of Bucharest), and was initially hired as a broadcaster at the Radio Broadcasting Company. In 1968 she became the head of the English service in the Foreign Transmission News Room (currently Radio Romania International), a position that she held until her premature death. Her radio and television interviews with William Saroyan, Yehudi Menuhin, Henry Moore, Paul Scofield and other great interlocutors remain models of the genre. Also remarkable is her activity as a translator from Anglo-American literature. The novels The Mill on the Floss (George Eliot), Tess of the d’Urberville (Thomas Hardy) and The Catcher in the Rye (J. D. Salinger) were brilliantly translated into Romanian due to the talent of Catinca Ralea.

Educated in her family’s cultural atmosphere, and daughter of the university professor Mihai Ralea, esthetician and famous politician, Catinca Ralea was a prominent radio figure who gave the best years of her life to this institution.

He was a programme maker, an exceptional professional and the moderator of “Sfertul academic” programme. Paul Grigoriu’s journalistic career was marked by his summer performances at Radio Vacanta (until 1989) and by radio programmes such as “Noapte albastra”. The unprecedented public success he had was brought to him by the well-known programme “Matinal”, whose initiator he was after 1990.

First-rank personality of the Romanian Radio Broadcasting Company, Paul Grigoriu set his stamp on the Romanian radio after 1989 by his inspired performance.

A composer, conductor and pianist and full member of the Romanian Academy (since 1955), a founder and president of the Romanian Composers’ Society, professor and rector of the Royal Music Academy of Bucharest, Mihail Jora (1891-1971) was the first musical director of the Romanian Radio Broadcasting Company (1928-1933). In the early years of the Romanian radio, classical music was a main component of his programmes, and this merit belongs to Mihail Jora who thought about everything by achieving something more than what is called today Radio Musical Season. Mihail Jora delivered between 1930 and 1932 more than 30 conferences on musical education from the radio microphone.

A composer of symphonic poems, pieces for violin, piano, string quartet, lieder and a translator of librettos and conductor, Alfred Alessandrescu (1893-1959) followed into Mihail Jora’s steps, in 1933, in the management of musical programmes of the Romanian Radio Broadcasting Company until 1938, with a short coming back between 1945 and 1947. He continued to conduct the Radio Orchestra throughout his life, from 1933 to 1959.

Alfred Alessandrescu belonged to the series of musicians who set up in 1920 the Romanian Composers’ Society. He fought for musicians’ rights and for the establishment of a viable, valuable and competitive national school. His life and creation were dominated by professionalism, seriousness and deep knowledge of the musical problems. He held numerous radiophonic programmes, lesson-concerts and conferences.

Florian Pittis (1943-2007) was one of the most beloved theatre actors and also a film director, translator, folk singer and radio programme maker.

The artist signed musical reviews in diverse publications and had a remarkable contribution to the promotion of pop-rock music through the organization of radiophonic programmes within Pittis Show series.

In 1999 he became the Director of Radio Romania Tineret broadcasting station, which in November 2004 was, due to his efforts, turned into Radio 3Net, the first Romanian radio that broadcast exclusively via internet.

News, interactivity, music, theatre, thematic files, vast documentaries, presentations of events and personalities, links to numerous other sources of information and culture from the whole world, alongside the crystallization of a young, bold and competitive team – are some of his main achievements as a radio figure who guided himself after his favorite dictum: After me, the Progress! As homage paid to everything Florian Pittis meant, Radio3Net broadcasting station bears his name.

Romfilatelia thanks Romanian Radio Broadcasting Company for the documentary and photographic support granted for the achievement of this postage stamp issue. 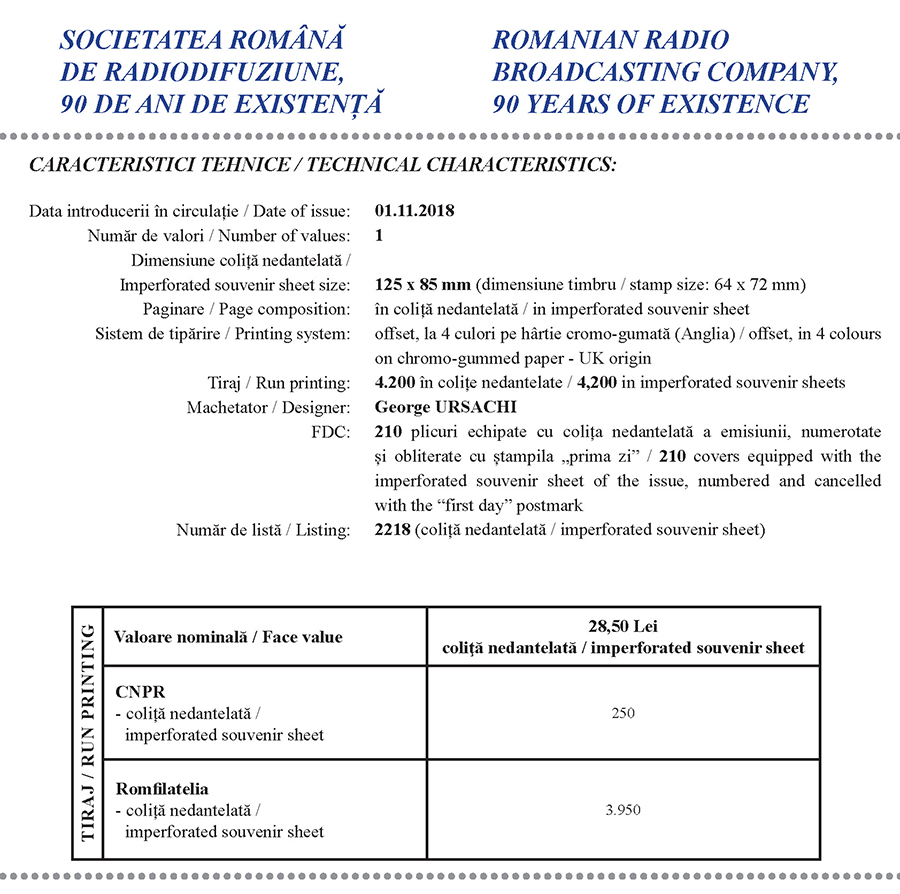