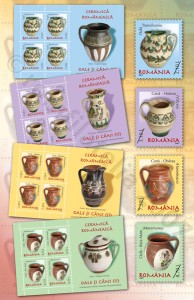 Early pottery dates back to ancient times and the beautiful ceramics dating back to the Neolithic era stand as a proof, time when a remarkable civilization emerged on the territory of Romania.
Decoration motifs that embellish pottery are mainly geometrical but also fitomorphical, avimorphical, zoomorphical, and antropomorphical.
One of the oldest geometrical decoration motifs is the triangle that is commonly used in prehistoric ceramics and is represented under various shapes (several triangles of equal size), the “saw” or the “wolf teeth”, (triangles alternatively ranged upside-down).
The spiral is especially popular with ancient ceramics of Cucuteni and Boian but also pottery created in Vama, Horezu, Oboga, Romana and of other traditional zones commonly made of white clay. Although a very old motif, the spiral is nowhere to be found in Occidental pottery of the time and even in the latter ones, such as the Mediterranean potteries.
Together with the stalk and the garland, another widespread fitomorphical motif is the fir tree branch, commonly used in prehistoric pottery. The fir tree branch symbolizes the perenniality associated to the tree (the tree of life). Other symbols used include the vine (Christian symbol), but also the ears, the clover, the grape cluster, flower buds, the leaves, and the stylized flowers.
Avimorphical, zoomorphical, and antropomorphical motifs are more recent and rare and belong to the Byzantine tradition. Pigeons, yard birds, fish are all represented (Christian symbols).
Of particular interest are symbolic motifs related to pre-Christian ancient beliefs associated to the cult of the Sun that replaced the cult of fecundity during the Bronze era.
On the stamp with the face value of RON 2.10 we find a pot handcrafted in Transylvania.
On the stamp with the face value of RON 3.10 we find a cup made in Horezu-Valcea.
On the stamp with the face value of RON 7.20 we find a cup crafted in Obarsa-Hunedoara.
On the stamp with the face value of RON 8.70 we see a pot made in Baia Mare-Maramures.

The pots and cups illustrated on the postage stamps are part of the collection inherited by the Romanian Peasant Museum. 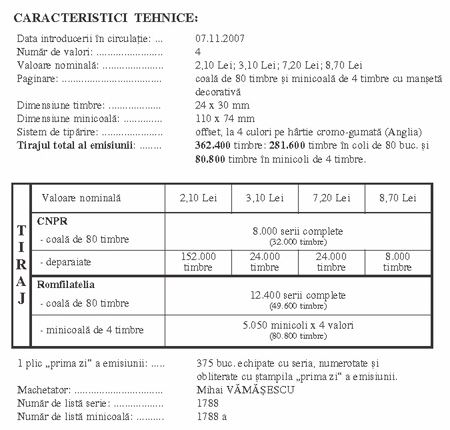