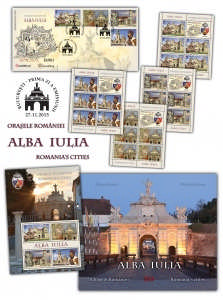 The latest postage stamp issue proposed by Romfilatelia to collectors and the general public is dedicated to the citadel city of Alba Iulia, the most important spiritual and cultural centre of Transylvania. Thus, Romfilatelia continues the philatelic project Romania’s cities, where the stamp is the mirror of beautiful urban settlements from our country, whose existence contributed to shaping the national culture and history. With the symbolic title of Romania’s cities, Alba Iulia, the postage stamp issue will be available starting from Friday, November 27th, 2015, in Romfilatelia’s shops in Bucharest, Bacau, Brasov, Cluj-Napoca, Iasi and Timisoara.

The four stamps of the issue illustrate important monuments from the city’s heritage, which stand out through their historical weight, their sculptural and architectural forms, as well as their value and symbolic meaning acquired in time.

The stamp with the face value of lei 8.10 presents the “Saint Michael” Cathedral, the most important medieval architectural monument in Transylvania, within it ranging all the architectural styles of the European Middle Ages (Romanesque, Gothic, Renaissance and Baroque).

On the stamp with the face value of lei 9.10 is illustrated the Coronation Cathedral, a symbol of the Union of all Romanians from the historical provinces of the country. Built in record time, in just nine months, from 1921 to 1922, the cathedral hosted the coronation for King Ferdinand and Queen Maria, on October 15th, 1922. The cathedral is dedicated to the Archangels Michael and Gabriel, while its architecture, in Neo-Romanian style, is created by Victor Gheorghe Stefanescu.

The four stamps of the issue are completed by a first day cover, while as page composition were used the sheet of 32 stamps, the minisheet of 5 stamps + 1 label and the block of 4 stamps (in philatelic album).

The special product is the philatelic album, created into a limited edition of 245 pcs. and equipped with the block of the issue and the first day cover with the “first day” postmark clearly imprinted in gold foiling. Both products are numbered from 001 to 245.

Romfilatelia thanks the Alba Iulia City Hall for the documentary support granted in the creation of this postage stamp issue.