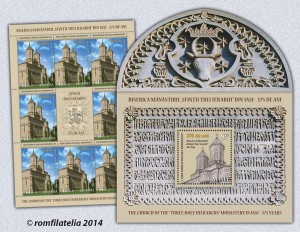 “Everyone agrees in saying that neither in Moldavia, nor in the land of the Cossacks, is there a church that can be considered equal to this one, either by trimming or by beauty, for it amazes every visitor. May God preserve it until the end of time!”, these were Paul de Halep’s words during his trip to Iasi, shortly after the completion of the Three Holy Hierarchs Church.

Unique in the world, entirely carved in stone and gilded at the time of its building in 1639, the Three Holy Hierarchs Church in Iasi represents a symbolic creation of Romanian medieval art, being renowned mainly for the extraordinary stone lace-work which adorns the facades, from bottom to the top of the derricks. Experts have counted over 30 non-repeating registers of decorative motives. The exuberant decor makes the church look like a shrine or a relic-box. Moreover, the church was designed to hold the relics of Saint Mother Paraskeva.

Founded by ruler Vasile Lupu, the church was built between 1637 and 1639. Following the payment by Vasile Lupu of the debts towards the Holy Sepulchre and the monasteries of Mount Athos, and given the many charities, the Patriarchate and Holy Synod of Constantinople, as a gesture of gratitude, sent the relics of Saint Paraskeva toIasi. They arrived two years after the building of the church in 1641.

The inscription at the entrance of the church presents Vasile Lupu not as the founder of a monastery, but of “a holy prayer”, through its beauty, this church being a prayer carved in stone.

Through its pomp, the Three Holy Hierarchs Church reflects the aspiration for the brilliant world of theByzantium, pointing out the richness of its adjacent structures and traditional forms adorned with precious materials and impressive decorations.

The church is placed under the protection of Three Holy Hierarchs, Vasile the Great, Grigore the Theologian and Ioan Gura de aur (John Chrysostom), whereas in turn, it protects the tombs of ruler Dimitrie Cantemir, ruler Alexandru Ioan Cuza, its founder Vasile Lupu and his wife Tudosca, as well as the graves of their three sons. An inscription carved in marble recalls that the coffin containing Saint Paraskeva’s relics, protector of Moldavia, was initially placed here, being then moved to the imposing church belonging to the Mitropoly of Moldavia, located very close to the Three Holy Hierarchs Church, where they can be found today.

In the church’s gate tower (which no longer exists today), and which served as belfry, Vasile Lupu had installed a huge horologe, the first public use clock inMoldavia(1654).

During the restoration made by the French architect Lecomte du Noüy in 1882, the entire mechanism was dismantled and transported toFrance, where it remained.

Lecomte du Noüy brought some significant changes to the church, whilst keeping its old architectural forms and outside sculptural ornamentation.

The painting was re-made, the veil and the interiors were completely rebuilt and decorated with furniture from solid brass, plated with gold, prepared inViennaat the expense of King Carol I ofRomania. The re-consecration of the place of worship took place in 1904.

After the burning of the church by the Ottomans, they gathered the melted gold from the walls, traces of gold being visible nowadays only around the windows from the North.

An artistic masterpiece, the Three Holy Hierarchs Church has become part of history, being a fireplace of culture and spirituality. In 1642, the representatives of the main Orthodox branches (Greek, Slavonic and Romanian) came here to attend the inter-Orthodox Synod inIasi. Kings and patriarchs visited the holly place, showing their profound admiration for the refinement of the monument.

In fact, the church was closely linked to culture and education, renowned professors fromConstantinopleand the Greek East coming here to teach during the period it was under the administration of Greek monks.

Since 1990, the Three Holy Hierarchs Church inIasi has become again a monastery, the city’s downtown becoming thus a place of pilgrimage especially among intellectuals. As a symbol, in 1997, the statue of the greatest Romanian poet Mihai Eminescu, who had lived for some time in the house onsite, was placed within the monastery.

On the occasion of the 375-year anniversary since the building of the Church of the Three Holy Hierarchs Monastery, and within the annual theme dedicated to Romanian Postage Stamp Day, Romfilatelia introduces into circulation an issue of postage stamps dedicated to this architectural masterpiece and spiritual monument, unique in the world.

The postage stamp of the issue, with the face value of lei 14.50, illustrates the building of the Three Holy Hierarchs Church in Iasi.

The souvenir sheet of the issue has special die cut on margins and illustrates the rotive in the church porch, next to a stone ornament representing the emblem of Moldavia. The postage stamp of the souvenir sheet, with the face value of lei 8.10, also presents the building of the Church.

We address our respectful thanks to His Holiness Teofan, the Metropolitan of Moldavia and Bukovina for the support granted in the accomplishment of this issue of postage stamps. 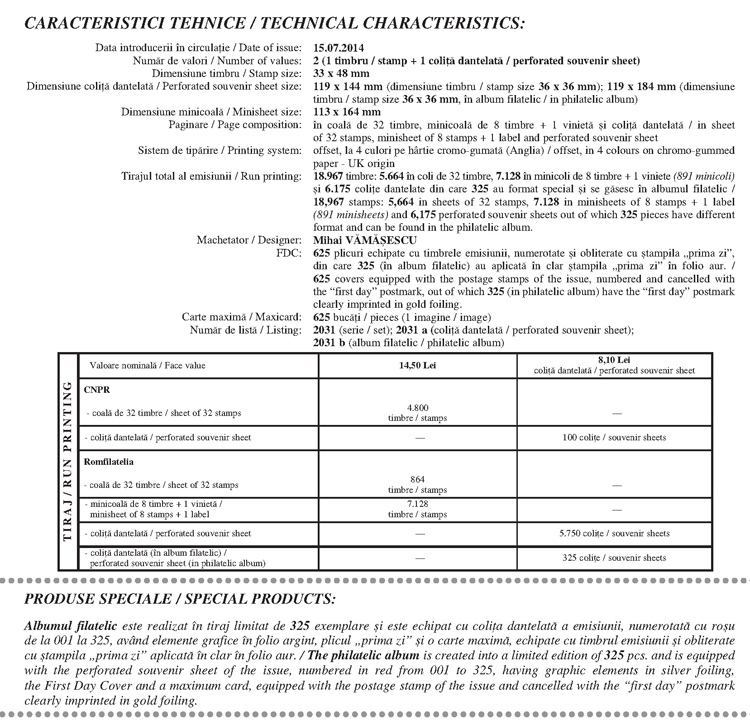