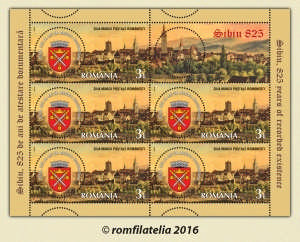 On July 15th, on the ocasion of the Romanian Postage Stamp Day, Romfilatelia introduces into circulation a postage stamp issue with a historical theme, SIBIU, 825 YEARS OF RECORDED EXISTENCE.
The first documented mention of Sibiu dates from a document issued by Pope Celestine III, on December 20th, 1191. In this early stage of the Saxon colonists’ settlement in the area, they brought with them the habits and knowledge of craftsmanship much advanced when compared to what one could find at that moment in Transylvania.
Their organization was done in guilds, and their first statute dates back to 1376 and mentions no less than 19 guilds, with 25 craftsman branches. By comparison, in the same period in Germany, there were 17 guilds in Ulm, and in Augsburg 15. Their number grew later on, as well as the importance they played in the city’s political life.
The guilds had the task of defending the city; they would oversee the towers and bastions. The four gates at the entrance were in the care of the four guilds with the most members: the tailors (Tower Gate), shoemakers (Ocnei Gate), butchers (Cisnadiei Gate) and tanners (Elizabeth Gate). 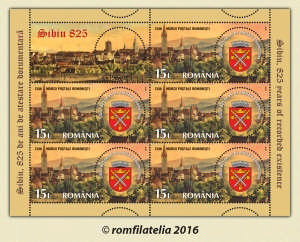 The city’s riches drew the Ottoman attacks on Sibiu. After the great Tartar invasion, the town was rebuilt with attention to fortification, the city becoming one of the strongest in the area.
The 15th century brought many attempts to conquer the city. Sultan Murad II subjected the city to an eight day siege, without managing to conquer it.
Also, Mezid Bey tried to conquer Sibiu, but Iancu de Hunedoara intervened and together with the fortress’ defenders crushed the Turkish forces. At the same time, the people of Sibiu decided to extend the fortifications to the Lower Town.
At the beginning of the 16th century, Sibiu was presented as a prosperous city, in full expansion. The number of guilds had passed 30, and the gunsmiths, munitions experts, printers and fine metal smiths had taken Sibiu’s fame far abroad.
Giovan Andrea Gromo of Bergamo, a mercenary in the service of John Sigismund Zápolya, prince of Transylvania, described Sibiu in 1567 as “a big, bright city, powerful and richly endowed with all that is needed for a worthy city life. (…) Within the town, houses are made of stone, spacious, beautiful and good for living in, without being castles. Flowing brooks cross the wide and straight streets, clean and neat. There are four main gates, one for each of the four cardinal points. The wine and bread are very good, better than in any part of the country. Here gold and silver coins are cast uninterruptedly.”
The stamps of the issue reproduce the image of a painting by Franz Neuhauser the Younger, General view of Sibiu in 1808, currently in the heritage of the Brukenthal National Museum. In the graphics of the two stamps the current emblem of the city is included, made available by the Sibiu City Hall.
The illustrated sleeve of the issue’s block, presented in a philatelic album, shows off details of a document from the Sibiu County Department of National Archives, a certificate issued by the carpenters’ guild of Sibiu, dated 1798 and which portrays a panorama of the city at that time.

Romfilatelia thanks the Sibiu City Hall, the Sibiu County Department of the National Archives and the Brukenthal National Museum for the documentary support granted in the creation of this postage stamp issue. 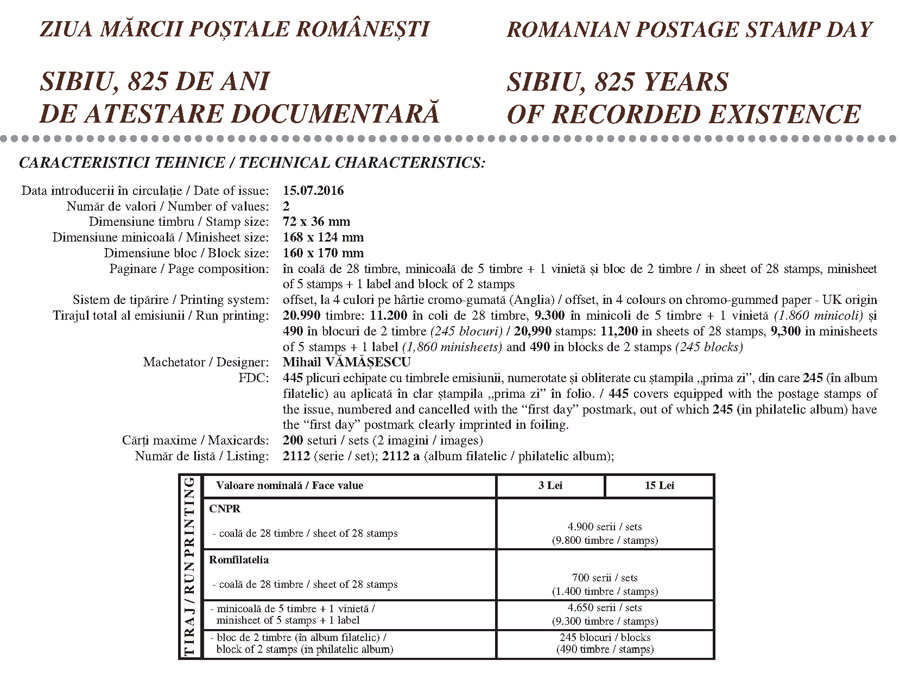