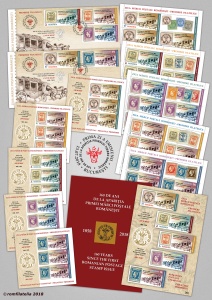 In the Centenary year of the 1918 Great Union, in the context of the 160th anniversary since the first issue of Romanian postage stamps, known in the list of topics under the title Bull Head (Cap de bour), plus other premieres related to the manner of achieving the production and presentation of the stamps, Romfilatelia introduces into circulation the postage stamps issue Romanian Postage Stamp Day – Philatelic Premieres.

The five face values of this issue are defined as follows:

A brief presentation of the aforesaid postage stamps begins naturally with the Bull Head (Cap de bour) issue, printed on July 15th, 1858 and put into circulation on July 22nd, 1858 (it was withdrawn in October 1858). At the release date of the issue, the exchange rate was 108 parale (the para/parale was a former small currency of the Ottoman Empire made from silver that circulated also in the Romanian countries in the 19th-20th century) for a French franc. Postage tariffs taken over from the France model – 25 centimes, 50 centimes, 75 centimes and a franc – had the correspondent face values of stamps, namely 27, 54, 81 and 108 parale. The drawing of the stamps, printed for each face value with an individual metallic cliché, reproduces the bull head, element of Moldavia’s coat of arms, along with the post horn, a five-pointed star, the PORTO SCRISOREI legend written in Cyrillic letters and the face value expressed in parale. All elements are entered in a circle of 19.5 mm in diameter for the face values of 27 and 54 parale, 19.75 mm for 81 parale and 20.25 mm for 108 parale.

The postage stamps of the Bull Head (Cap de bour) first issue (July 1858) were printed in sheets of 32 stamps, four rows of eight stamps arranged in such a way that eight pairs of “tęte-bęche” were formed in the middle of the sheet. The special paper, of foreign origin and different thickness, structure and colors, was then manually covered with acacia, yellow-brown gum on the gluing face.

The stamps printing took place at the printing house in Iasi, known as Atelia Timbrului, founded in January 1856 by the Ruler Grigore Alexandru Ghica for the printing of the “Ruler’s stamp” („Timbrului domnesc”). The press used for the carrying out of the Bull Head (Cap de bour) postage stamps was purchased from Vienna in 1857.

The second Bull Head (Cap de bour) issue was put into circulation simultaneously with the introduction of the single postal tariff on November 1st, 1858 and was with drawn on May 1st, 1862. Consisting of three postage stamps with face values of 5, 40 and 80 parale, the issue displays changes by comparison with the drawing of the first issue: the bull’s head and the postal horn have different design, the star has six corners instead of five, the legend PORTO SCRISOREI or PORTO GAZETEI is written in Latin, the Cyrillic alphabet remaining for the abbreviated writing PAR (parale). The entire graphic assembly is not engraved in a circle, but in a slightly rectangular-at-the-corners rectangle. The printed stamps also featured 32 postage stamps with eight pairs of “tęte-bęche” at their center. The paper, of English origin, was thin, almost transparent, azure or yellowish.

The postage stamp with the legend PORTO SCRISOREI was intended for franking postal mail and parcels, and the PORTO GAZETEI legend was used to the postage franking of newspapers and prints.

The first issue of Romanian postage stamps known as Carol bewhiskered (Carol cu favoriti), with face value expressed in bani (the smallest divisionary currency of lei used as exchange instrument and means of payment), was put into circulation 150 years ago, in 1868.

The postage stamps of this issue are part of the “lithographed” category and were printed in Bucharest starting with 1864 until 1872. The typographic method used (the print mould was a special limestone stone with perfect flatness) had some inconveniences by comparison with the print executed with metallic cliché or engraved clichés: less bright colors, fine details reproduced with difficulty. This issue marks the moment of introducing the Romanian monetary system with the LEU unit and the BAN division.

It should be noted that the Carol bewhiskered (Carol cu favoriti) postage stamps, with value in PARALE or BANI, were imperforated.

The postage stamp issue Carol with beard (Carol cu barba) belongs to the “lithographed” category and was carried out in two stages: in the years 1871-1872, five postage stamps are issued imperforated and between February and October 1872 a issue of three values, made for the first time as perforated postage stamps was put into circulation. 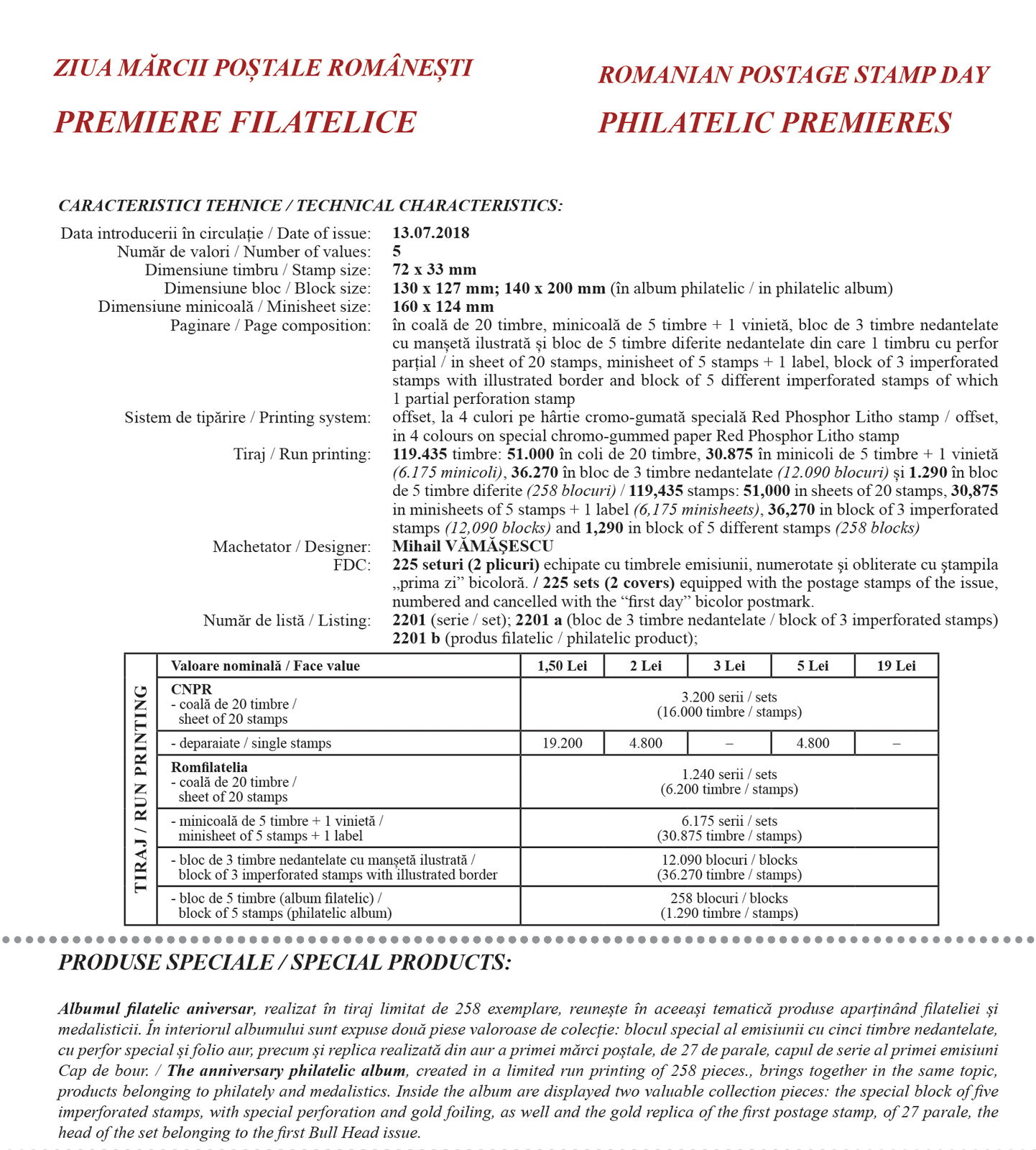