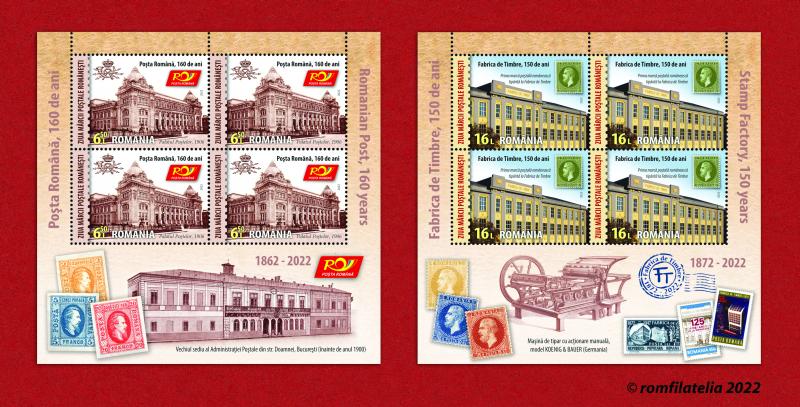 The postage stamp with the face value of Lei 6,50 and the perforated souvenir sheet (with the face value of the stamp of Lei 32) are dedicated to the Romanian Post. In the graphic composition of the two philatelic pieces, are found the Post Palace, as presented in the year 1906, the portrait of the signatory of the Founding Decree, the ruler Al. Ioan Cuza and the facsimile of the Decree no. 527 (August 1st 1862), by which it was ordered the unification of the post administrations of the two Principalities.

Among the activities with social impact carried out on the territory of the United Principalities, Prince Alexandru Ioan Cuza also included as a priority objective the one related to the presence of postal services.

The phased introduction of the state monopoly on the postal activity was started in 1857, in Moldavia, when a first measure was taken by introducing postage stamps on its territory (the “Bull’s Head” issue – 1858). After the establishment of the Romanian capital in Bucharest, on July 23rd, 1862, the Decree no. 527 was issued on the unification of the postal administrations of Moldavia and Wallachia. The period of modern post began with the year 1864 when the telegraphic and later the telephone service was added to the postal service, giving birth to an institutional structure bearing the PTT symbol.

On May 1st, 1865, the postal subscription service was introduced, after which the rural postal service was established.

Between September 15th and October 9th, 1874, in Bern, the first Postal Congress took place, during which it was decided to create the Universal Postal Union, Romania being one of the 22 founding members of the organization. At this Congress, Romania was represented by George Lahovari.

In 1894, taking as model similar buildings in the West, construction began on the Post Office Palace, which was to be inaugurated in 1900, and in 1903 the official postage stamps issue, Căişorii (Little Horses), was to be launched in an official setting, with eight face values.

In 1925, PTT also took over in its administration the operation of a new branch of telecommunications, radiotelegraphy, the new symbol of the institution becoming PTTR. After the Second World War, by the Decree no. 197 of 1955, the absolute monopoly of the state over the field of post and telecommunications has been again enshrined.

After 1989, the Rom-Post-Telecom Government Business Enterprise is separated into four government business enterprises: “R.A. Poșta Română, R.A. Rom Telecom, R.A. Radiocomunicații” and the General Inspectorate of Radiocommunications. As of July 1998, “R.A. Poşta Română” was transformed into the National Company Romanian Post (NCRP), that became the national operator in the field of postal services, a unique provider of universal services at any point in Romania, at rates accessible to all users and at high quality standards.

Through its subsidiary, Romfilatelia, established by the GD no. 42/2004, was designated by the Romanian Government as the only institution authorized to issue the Romanian postage stamp, a true symbol of country and promoter of national values, universal messenger of the Romanian culture and history.

160 years after the establishment of the postal institution, the National Company Romanian Post catches in its charter of representation as fundamental values: trust, tradition, safety and performance, along with the achievement of other goals such as national coverage and diversity of services, respect for customers and promptness.

The Stamp Factory was established on the basis of the “Law for the Establishment of the Stamp and Registration Duty” of February 29th, 1872, promulgated by King Carol I.

With a small staff, it started its activity on the ground floor of the Ministry of Finance. Then, starting with 1884, the workshop for printing stamps and special regime papers was transferred to the State Mint, located on Kisseleff Road.

One year after the first revenue stamps were made in the country, in 1886, General Stamps Depot (special section of the Ministry of Finance) was attached to the Stamp Factory.
Until 1901, the Stamp Factory was under a joint Directorate with the State Mint.

This is followed by the separation from the State Mint and the transfer to the subordination of the Administration of State Monopoly, together with the Match Factory, which also provided a building wing for the installation of the Factory’s workshops and warehouses. Although, over two decades, the production premises had benefited from some expansions, technological modernization and production requirements required the approach of an appropriate solution: the design and construction of a new building with a ground floor and two floors, whose construction began in 1924, being occupied with all means of printing and finishing in 1926. The building has remained until today the headquarters of the Stamp Factory. In 1928, the special attention paid to the Factory materialized in its transition to the Official Gazette Bulletin and the State Printing Houses, under the same authority of the Administration of State Monopoly.

Since the ʹ60s, the Stamp Factory is found in the structure of the State printing houses, subordinated to the Head Office of the Printing Industry controlled by the Council of Socialist Culture and Education, then of the Banca Națională a României and, currently, operating as a branch of the National Company Romanian Post.

The first works executed at the Stamp Factory were the inlaid sheets and the bank bills, in 1872, and starting with 1875, the revenue stamps were printed. The first postage stamp that belonged to the 1st issue: “Bucharest”, Carol I was printed in 1876 with clichés brought from Paris. In terms of printing technology, it was visibly modernized until 1932, when the first “Romanian Philatelic Exhibition” was organized, in which the Factory had modern equipment for printing after engraved clichés (taille-douce) and with printing patterns made by the technique of heliogravure (deep printing). Starting with 1928, the Stamp Factory assimilated in the current production works of art printed in heliogravure. In the ʹ80s, it was the only printing house in the country that had all four types of printing used in Europe (high printing, offset printing, deep printing, taille-douce printing).

Currently, the appreciated Romanian postage stamps are printed by the offset process, on a six-colour machine with computer-assisted controls.

In parallel with the activities of printing stamps and postal stationaries, the Stamp Factory also addresses activities specific to the National Company Romanian Post, meant to improve and operationalize its activity.

Romfilatelia thanks to the representatives of the National Archives of Romania and of the Monitorul Oficial Publishing House, for the documentary support granted to the development of this postage stamps issue. 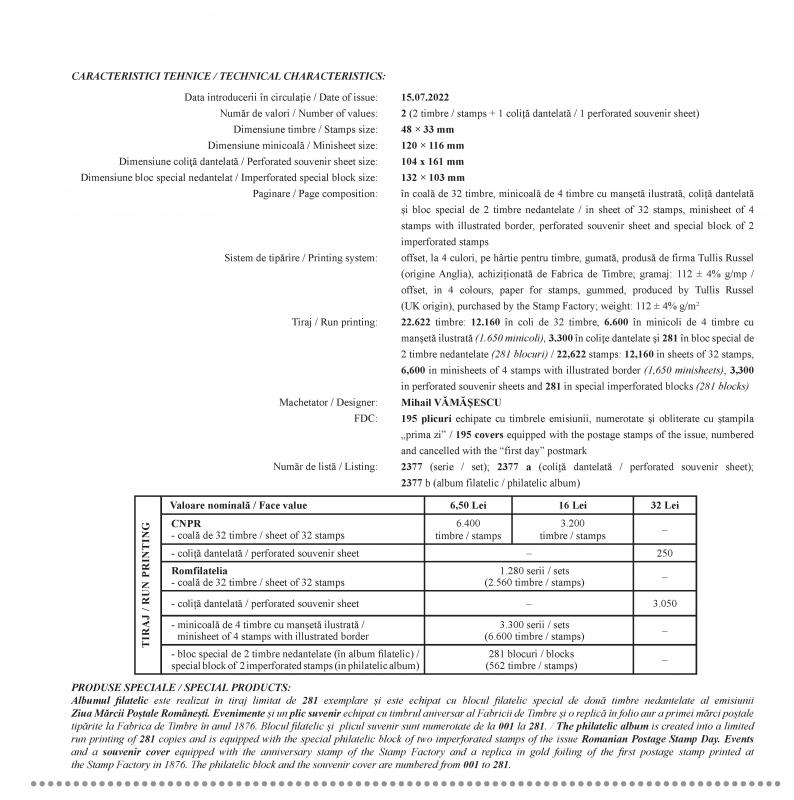