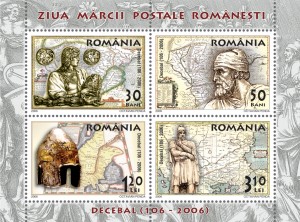 Romfilatelia, the company specialized in issuing and trading Romanian postage stamps, within the annual thematic ROMANIAN POSTAGE STAMP DAY, on the occasion of the commemoration of 1900 years since Decebal´s death, introduces into circulation a postage stamps issue dedicated to the great Dacian king Decebal (106 – 2006). Romfilatelia, the company specialized in issuing and trading Romanian postage stamps, within the annual thematic ROMANIAN POSTAGE STAMP DAY, on the occasion of the commemoration of 1900 years since Decebal´s death, introduces into circulation a postage stamps issue dedicated to the great Dacian king Decebal (106 – 2006).
Under King Decebal (87-106 A.D.), Dacia reached its peak in its development as a state whose political unity spread over a territory delimited by Tisza, Danube and Dnestr. During that period, the expansionist tendencies of the Roman Empire, mainly motivated by the precarious economic and financial situation of the Empire, directly lead to the preparation of an incursion on the Dacian territory, particularly rich in natural and material resources.
The first confrontation, on the Dacian territory, took place during the reign of Domiţian, in 87 A.D. A Roman army, composed of 5 or 6 legions, entered (probably) through the Olt Valley where, near Turnu Roşu, it was taken by surprise in a trap by Decebal´s army and defeated; the Dacians captured prisoners, numberless trophies and the flag of the 5th Legion, whose commander had been killed in battle.
After only one year, at Tapae (Transylvania´s Iron Gates – “Porţile de Fier” – between Caransebeş and Haţeg) there was a new confrontation between the Dacians and the Romans, only this time the Romans won. However, due to the military problems of the imperial armies in Pannonia, a compromise peace was made in 89 A.D., following which Decebal succeeded, after wise negotiation, to obtain money benefits, military masters and trainers.
During the almost 12 years of peace, the Dacian state grew stronger, its centralization was accelerated, the army was well trained and equipped, and an extensive civil and military engineering program was started, particularly in the region of Orăştie mountains.
After his climbing the throne, Emperor Trajan (under whom the Roman Empire reached the peak of its power and territorial expansion) concentrated, at the beginning of year 101 A.D., in Moesia Superior, 13 or 14 legions (approx. 150,000 soldiers), to occupy Decebal´s kingdom.
The Roman army led by Trajan, crossed the Danube on ships bridges at Dierna (Orşova), entering Dacia through Banat. Again, at Tapae, during the summer of that same year, an atrocious and long battle took place, which ended with the victory of the Romans.
Towards the end of year 101 A.D. large Dacian forces crossed the Danube and entered Moesia, forcing Emperor Trajan to mode towards the new war theatre open by Decebal. However, the ingenious strategic plan collapses after Decebal´s defeat in the winter and spring of year 102 A.D.
In the autumn of year 102 A.D., after a hard-bitten resistance, Decebal is forced to make peace, which was seen rather as a simple truce. Between years 103 and 105 A.D., Trajan asked Apollodor of Damascus, the most famous construction architect and engineer of that time, to build a bridge over Danube, at Drobeta.
Starting with the second Dacian War, in the summer of year 105 A.D., the Roman legions crossed the bridge and attacked Decebal´s army. Continuously constrained to defend himself, Decebal withdrew at Sarmizegetusa. After the conquest of the citadels that guarded the access to the capital city (Blidaru, Costeşti, Piatra Roşie, Baniţa, Căpâlna, Tilisca), the Roman legions began to besiege Sarmizegetusa.
Despite the heroic Dacian resistance, the citadel was conquered and destroyed to the ground. On this occasion, Trajan recovered the flag of the 5th Legion. A part of the defenders, among which Decebal, succeeded to leave the citadel, trying to continue the resistance against the Romans inside the country. Followed by the Roman cavalry, in order not to fall alive in the Romans´ hands, Decebal committed suicide. A part of the Dacian kingdom was transformed into a Roman province in the summer of year 106 A.D.
Following the defeat of the Dacians, besides many prisoners, the Roman troops also appropriated the Dacian thesaurus, containing huge quantities of gold and silver. Due to these riches, popular parties and feasts were organized for 123 days in Rome, in honour of Trajan´s triumph over Dacia. This proves how redoubtable our Dacian ancestors were, as the Romans celebrated their defeat for such a long time.
The importance of the wars with the Dacians is illustrated in many monuments achieved by Apollodor of Damascus: Trajan´s Column – whose bas-reliefs present battle scenes of Romans against the Dacians during the two wars; Trajan´s Forum and Ulpia Traiana Basilica.
A defining element for the personality of the last hero king of the Dacians is what the historian Dio Cassius wrote about Decebal: “He was very cunning in the matter of war and skillful, being able to choose the right time to attack the enemy and to withdraw in good time. Skillful in planning an ambush, he was courageous during battle, knowing how to neatly use a victory and to successfully manage defeat, and due to this he was for a long time a fierce adversary for the Romans.”
Three of the postage stamps of the philatelic issue (those with the face value of 30 Bani, 50 Bani and 3.10 Lei) represent a personal graphic conception of the artist Octavian Penda.
The postage stamp with a face value of 1.20 Lei associates the image of a Dacian helmet to the map of the ancient Dacia.

To place your orders, please contact Romfilatelia, the specialized company in philatelic trade, at the following coordinates: