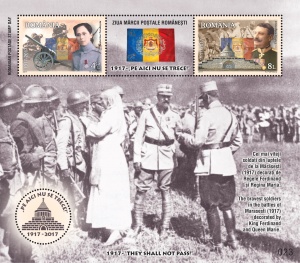 100 years ago, the victories carried out by the Romanian Army on the battlefields of Marasti, Marasesti and Oituz, acts of valor and sacrifice were steps that led to the achievement of the process of building the Romanian National State.

Remaking the thread of events at that time, the battle of Marasti, July 11th 1917, began with a strong artillery training continued next day, an action that caused significant damage to the enemy, facilitating the offensive of the Romanian troops. The Marasesti battle was a true masterpiece of military art, which highlighted the commander qualities of General Alexandru Averescu. The victory gained was brilliant, the enemy front being destroyed over a final width of 30 km and a depth of 20 km. Over 30 localities were freed. The victory at Marasesti proved the special qualities of Romanian soldiers, of their officers of different ranks and it had an important moral meaning, as a payback for the defeats from the fall of 1916.

The battle to the north of Focsani began, known in historiography as “the Battle of Marasesti”, was the biggest confrontation on the Romanian Front in the summer of 1917, and one of the most widespread battles of the Triple Entente in the same year.

On the front of Marasesti was the remarkable Ecaterina Teodoroiu, whose visage is illustrated on the stamp with the face value of Lei 4.50.  The beginning of the war found her at the hospital in Targu Jiu, where she carried out the care of the wounded, including her brother, Nicholas. His death convinced her to join as an active soldier. On August 9th 1917, in the midst of a platoon of infantry attackers, she was hit by the bullets of the enemy. At Targu Jiu, in the Gorj Prefecture Square was build a monument, as a sign of gratitude for her heroic sacrifice.

The leadership of the Romanian troops was entrusted to General Eremia Grigorescu, illustrated on the stamp with the face value of Lei 8, who, in the first battle of Oituz, had launched the heroic slogan: “They shall not pass!”. On the battlefield of Marasesti, these words entered on the conscience of the Romanian nation through the sacrifice of the Romanian Army.

The brave General Eremia Grigorescu, prematurely dead in 1919, being buried, according to his wishes, near the soldiers of the Marasesti Mausoleum.

Simultaneously with the action south of the Carpathians, the enemy went on the assault on the valley of Oituz, in order to break through the Romanian-Russian troops stationed there and make the junction with the troops advancing on the Siret valley. The days of July 29th – August 11th 1917, were the heaviest of the Battle of Oituz. The tenacious resilience of the defenders, corroborated with the effective measures taken by the General Headquarters and the 2nd Army to strengthen the troops, contributed to the defeat of the enemy armies.

Through the Marasti, Marasesti and Oituz fights from the “summer of fire” of 1917, the Romanian army proved it was ready to save the existence of the Romanian state, up to the very end, with the price of their life.

This postage stamp issue is completed by a First day cover, and as composition there were used a sheet of 32 stamps, the minisheet of 5 stamps and label.

As mentioned before the special product of the isuue is the philatelic album, created into a limited run printing of 245 pcs. and equipped with the special block of 2 stamps and the First day cover with the “first day” stamp clearly imprinted in gold folio. Each element is numbered from 001 to 245.

Romfilatelia thanks the Historical Service of the Ministry of National Defence, Mrs. Colonel (r) Natalia Damian and Professor Cornel Andonie of the National Military Museum and the National Office for the Cult of Heroes for the documentary support granted in the creation of this postage stamp issue.