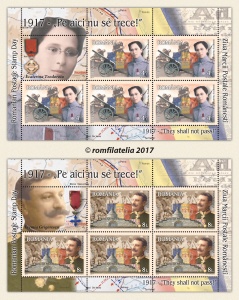 It is very hard to find a Romanian who will not say, in one breath, “Marasti, Marasesti, Oituz”, referring to the three great battles that changed the destiny of Romania. Romfilatelia celebrates the victory centenary of Marasti, Marasesti, Oituz through the issue achieved on the occasion of the Romanian Postage Stamp Day, entitled „1917 – They shall not pass!”.

The victories brought by the Romanian army, long-awaited and hard-won, became the turning point of the First World War for our country.

The Battle of Marasti (11/24 July – 19 July/1 August 1917) began with a strong artillery training, continued the next day, an action that caused significant damage to the enemy device, facilitating the offensive of the Romanian troops.

The Marasesti offensive was a true masterpiece of military art, which highlighted the commander qualities of General Alexandru Averescu. The victory gained was brilliant, the enemy front being destroyed over a final width of 30 km and a depth of 20 km. 500 km2 were freed, with 30 localities.

The battle to the north of Focsani began, known in historiography as “the Battle of Marasesti”, was the biggest confrontation on the Romanian Front in the summer of 1917, and one of the most widespread battles of the Triple Entente in the same year.

On the front of Marasesti was the remarkable Ecaterina Teodoroiu, whose visage is illustrated on the stamp with the face value of Lei 4.50, the one who became a heroine and an example of courage and abnegation. The beginning of the war found her at the hospital in Targu Jiu, where she carried out the care of the wounded, including her brother Nicholas. His death represented for her the conviction that war is the conscience of the supreme sacrifice. As a result, she decided she would leave for the front, succeeding to determine the military commanders in the Oltenia front line to allow her to effectively fight, gun in hand, together with the soldiers in the company that her brother Nicholas had fought with, from the 43rd Infantry Regiment.

On August 9/22, 1917, in the midst of a platoon of infantry attackers, she was hit by the bullets of the enemy, near the village of Muncelu, on the Marasesti front.

She was buried in Targu Jiu, in the Gorj Prefecture Square. It was then decided to build a monument to mark the tomb of the heroine.

The leadership of the Romanian troops was entrusted to General Eremia Grigorescu, illustrated on the stamp with the face value of Lei 8, who, in the first battle of Oituz, had launched the slogan “They shall not pass!”. On the battlefield of Marasesti, these words entered the conscience of the Romanian nation through the sacrifice of the Romanian Army. It is noteworthy that at the beginning of the battle against Field Marshal August von Mackensen, they were reformulated as follows: “They shall not pass here either!”

The brave General Eremia Grigorescu, prematurely dead in 1919, after having lived through the feeling of Great Romania, was buried, according to his wishes, near the soldiers of the Marasesti Mausoleum.

Simultaneously with the action south of the Carpathians, the enemy went on the offensive on the valley of Oituz, in order to break through the Romanian-Russian troops stationed there and make the junction with the Mackensen commanded troops advancing on the Siret valley.

The days of 29/31 July-11/13 August, 1917, were the heaviest of the Battle of Oituz, the enemy making desperate efforts to overcome the defence of the Romanian and Russian troops. The tenacious resistance of the defenders, corroborated with the effective measures taken by the General Headquarters and the 2nd Army to strengthen the corps, contributed to the defeat of the enemy armies.

Oituz was the last episode of the 1917 confrontations on the Romanian Front, known in historiography as the battles of the “gates of Moldavia”. They saved the existence of the Romanian state and contributed to the revival of the moral state of all citizens.

Romfilatelia thanks the Historical Service of the Ministry of National Defence, the National Office for the Cult of Heroes, Mrs. Colonel (r) Natalia Damian and Professor Cornel Andonie of the National Military Museum for the documentary support granted in the creation of this postage stamp issue. 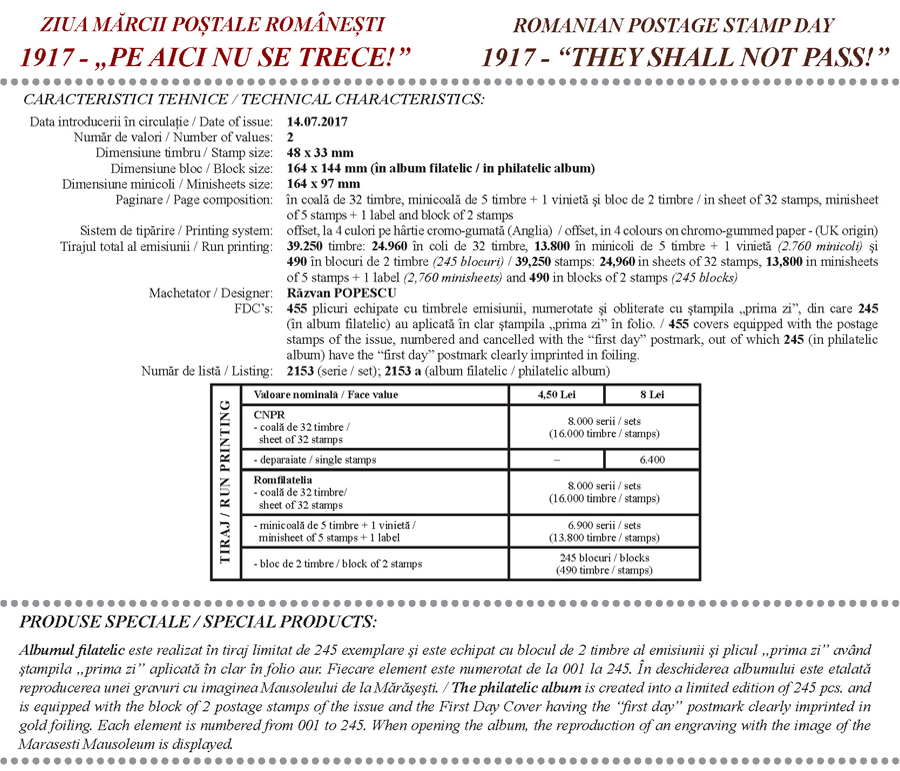