An academic society, ASTRA militated from the very beginning against denationalisation and for the rights of the Romanians in Transylvania.

The most important mean for fulfilling the assumed role was maintaining the creative potential of the Romanian people, through knowledge and dissemination of the national-cultural patrimony.

“Therefore, the Romanian people’s intelligence managed to work on the most beautiful and life-giving field of literature and sciences and to restlessly seek not fantastic but real and honest means to enlighten, cultivate, enrich and bless the people.” (George Baritiu)

The main goal of the Association was the conservation of the cultural unification of Romanian people, a major significance objective leading to the state unification.

Andrei Saguna was elected the first President of the Association, who would later become the Metropolitan of Ardeal (1864) and Honorific Member of the Romanian Academy (1871).

Another important moment in the history of the Association was the publication of the first Romanian Encyclopaedia, in three volumes, during 1898-1904. The work, having an overwhelming importance for the national culture, was coordinated by the publicist Cornel Diaconovici.

After the Great Union of 1918, the cultural actions of ASTRA Association would continue, fulfilling the great ideals for which it had been established.

In 1950 the institution would be abusively dissolved and, 40 years after this moment, it would be officially revived.

“I pray to God to watch over the activity of ASTRA, to inspire us all to do the right thing and to protect Transylvania, the language, the culture, the faith all over the Romanian land”. (His Holiness Antonie Plamadeala, 1991)

At once with the establishment of ASTRA, the Association Library was also founded and had at first 195 volumes.

Starting with 1863, its first librarian, Visarion Roman, published in the Romanian Telegraph newspaper the increase lists of the collections. Additionally to the complete collections of certain periodicals, it must be noted that from 1865 to 1890, the Academy of Sciences in Vienna continuously contributed to the completion of the library collections.

The oldest book in the Library is Sexti Libri Decretalium (1511), by Pope Boniface VIII and the oldest Romanian book is Sbornicul Slavonesc, printed by Coresi in 1580.

Nowadays, ASTRA Sibiu Library is among the first institutions of this kind in Romania, remaining not only a place of culture, but also of education for the future generations.

The two postage stamps of the anniversary issue, which Romfilatelia introduces into circulation, illustrate snapshots from ASTRA Sibiu history.

The design of the two postage stamps is completed with an artistic anniversary logo.

We would like to thank ASTRA Sibiu Association and ASTRA Sibiu Library for the documentary support granted inthe accomplishment of this postage stamps issue. 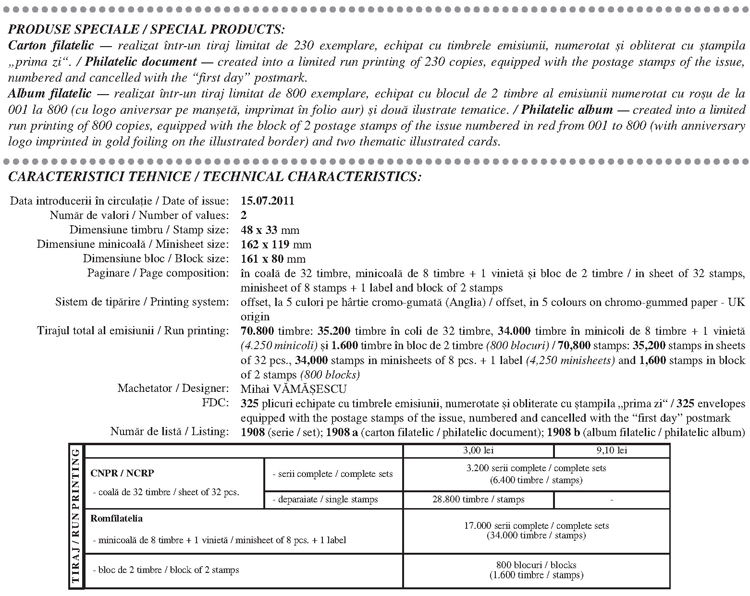