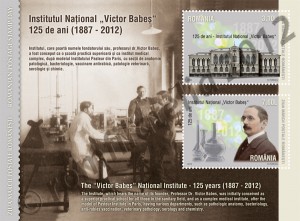 125 year ago, on 28 April 1887, the Pathology and Bacteriology Institute was founded inBucharest, bearing today the name of its founder, Professor Victor Babes. It is the oldest scientific researchinstitute ofRomania, being in the vanguard of the human pathology and biomedical sciences research at national and international level.

The Institute was initially conceived as a superior practical school for all those in the sanitary field and as a complex medical institute, after the model of Pasteur Institute in Paris, having various departments, such as pathologic anatomy, bacteriology, anti-rabies vaccination, veterinary pathology, serology and chemistry. Over the time, some of these fields of activity were taken over by Cantacuzino Institute, the Hygiene and Public Health Institute, the Virusology Institute, Pasteur Institute of Bucharest. The institute has functioned since 1899 until now in a monumental building on the bank of Dambovita river.

The entire history of the Institute is tightly connected to its founder’s activity, Professor Victor Babes (1854-1926), who was a member of theRomanianAcademy, of the Medical Academy of Paris and of the International Committee for Leprosy Control.

Professor Babes was awarded with academic prizes by the Paris Academy of Science, “Montyon” prize in 1886 and 1924, and “Breant” prize in 1913 and was a Knight of the Legion of Honour (France).

The Romanian scientist was one of the founders of modern microbiology and had essential contributions in the study of rabies, leprosy, diphtheria, tuberculosis, pellagra, malaria etc. Professor Babes discovered the virotic corpuscles in the cells from brain of rabid animals (“Babes – Negri corpuscles”) and more than 50 pathogen germs. In his memory, the pathogen agents causing some diseases (babesiosis) in animals were called “babesia“.

As a director of the Institute, Professor Babes approached the stringent medical-social issues of those times. In 1888, he founded inBucharestthe second anti-rabies vaccination center in the world after the one founded by Louis Pasteur inParis. In 1913, he contributed to the control of cholera outbreak inBulgariaby the preparation and use of a vaccine. He contributed to the organization of the medical system inRomaniaand envisaged the setting up of a Ministry of Health.

In 1900, Professor Babes founded inBucharestthe Anatomic Society which initiated the patho-anatomical studies in our country, whose tradition is kept alive by the Pathology Department of the Institute.

Today, “Victor Babes” National Institute for Research and Development in the Field of Pathology and Biomedical Sciences harmoniously combines history with the latest technological discoveries. The Institute is organised in 3 departments – pathology, immunology, cellular and molecular medicine, where an intense activity of fundamental and applicative research is carried out in the field of human pathology and therapy whose results are sent to the diagnosis center and the partner clinics. The Institute is a pole of excellence in the study of conjunctive tissue and of a new cell type, telocytes.

Moreover, the Institute is involved in training specialists in the above-mentioned domains and the latest technologies used to diagnose cancer, neurodegenerative diseases, cardiovascular diseases and immune dysfunctions etc.

We thank the “Victor Babes” National Institute for Research and Development in the Field of Pathology and Biomedical Sciences and “ Prof. Dr. Victor Babes” Memorial Museum (the Museum of the Municipality of Bucharest) for the documentary assistance granted in the accomplishment of this postage stamps issue. 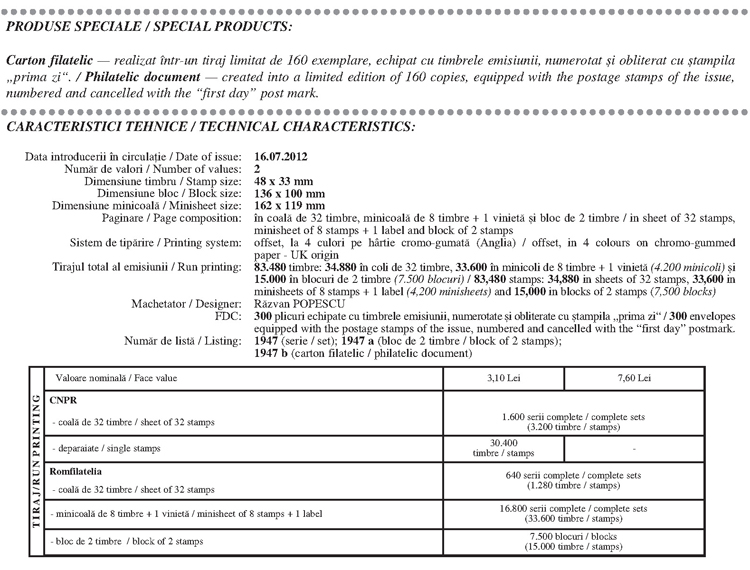