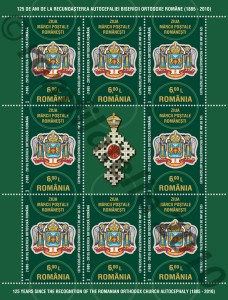 Under the theme Romanian Postage Stamp Day, Romfilatelia introduces into circulation the postage stamps issue “125 Years since the Recognition of the Romanian Orthodox Church Autocephaly”.“(…) Therefore, having debated along with the Holy Synod and with our beloved brothers in the Holy Spirit and Liturgy concelebrants, we declare that the Romanian Orthodox Church should be designated and acknowledged by everyone as independent and autocephalous, being managed by its own Holy Synod, the Primate of which is the one who has been the Most Reverend and His Eminence Metropolitan of Hungro-Wallachia and the exarch of the whole Romania for a long time (…)” (an excerpt from the Tomos of the Romanian Orthodox Church Autocephaly recognition, signed on April 25th 1885 by IOACHIM IV, Archbishop of Constantinople and Ecumenical Patriarch).

Under the theme Romanian Postage Stamp Day, Romfilatelia introduces into circulation the postage stamps issue “125 Years since the Recognition of the Romanian Orthodox Church Autocephaly”.

Due to the fact that the territory inhabited by Romanians was divided into three Countries and, despite the fact the churches from the Romanian Countries have adopted certain and conspicuous autocephalous actions, the Romanian Orthodoxy did not acquire its de jure status before the 19th century.

The Unification of the Principalities of Wallachia and Moldavia in 1859 created the premise of obtaining the Orthodox Church autocephaly in the recently formed Romanian state. The first stage is accomplished by promulgation of the Organic Decree for the Establishment of a Central Synodal Authority from December 3rd 1864, whose first article provided that “the Romanian Orthodox Church is and remains independent of any foreign ecclesiastical authority in respect of organization and discipline”. Then, the Constitution approved on July 13th 1866 and the Organic Law for the Election of the Metropolitans, Archbishops and Diocese as well as for the Establishment of the Holy Synod of the Autocephalous Romanian Orthodox Church from 1872, both settled the Church autocephaly.

On May 9th 1877, Romania proclaimed its National Independence, which was recognized by the Peace Congress of Berlin in 1878, followed by proclaiming Romania as Kingdom in 1881.

Under the circumstances of Romania’s increased fame, it was unequivocally recognized the imminence of the Romanian Orthodox Church autocephaly.

Acquiring this status, our Church obtained full self-management, administrative and jurisdictional independence from any other Orthodox Churches, having equal rights and still remaining interdependent dogmatically, canonically and liturgically.

The Great Unification fulfilled on December 1st 1918 created the appropriate conjuncture for the Orthodox Churches in Transylvania, Banat, Crisana and Maramures to become integral parts in the Unified Romanian Orthodox Church.

On February 4th 1925, the Holy Synod decided the establishment of the Romanian Orthodox Patriarchate (the highest administrative authority of an Orthodox Church) which was confirmed by the Royal Decree from February 25th 1925.

Consequently, it followed the law for the transformation of the Archbishopal and Metropolitan See of Hungro-Wallachia, as the Primate of Romania, into the Patriarchal See.

On November 1st 1925, Miron Cristea was appointed and enthroned as the first Patriarch of the Romanian Orthodox Church.

In 2010, for properly emphasizing the Romanian Orthodox history, the Chancellery of the Holy Synod developed a master program for the religious, spiritual, cultural, administrative and media-related project entitled “2010 – The Anniversary Year of the Orthodox Creed and of the Romanian Autocephaly”.

We would like to thank both to the Romanian Patriarchate and the Archdiocese of Bucharest for the support granted in the accomplishment of this postage stamps issue. 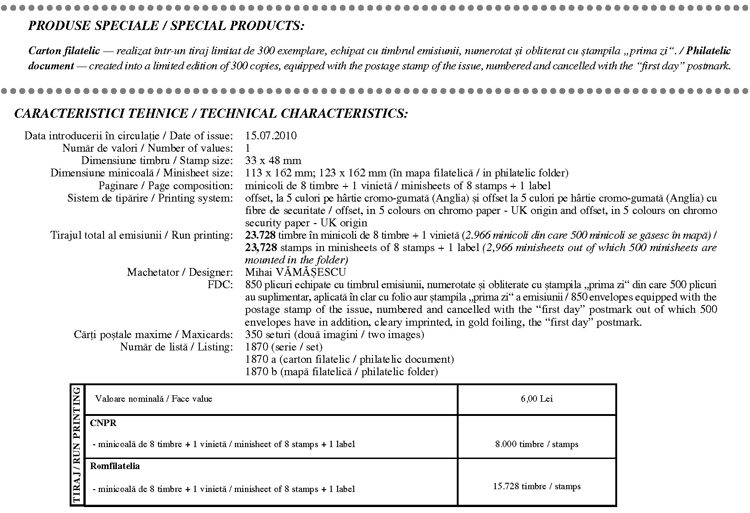