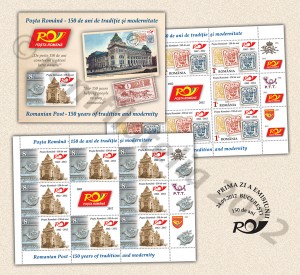 Following the natural course of historical events after the Union of the Romanian Principalities in 1859, the administrative and political institutions of the two Romanian states had to be unified.

This would happen after three years on 24 January 1862, when the two Assemblies of Moldavia and Wallachia started operating as a unique legislative body.

In March 1862, it was enacted the unification of postal administrations of the two Principalities and the new entity started operating effectively in August of the same year, in Bucharest under the name of “Unified General Direction of Post”.

The postal tariff mainly aimed at reducing the postal fees following the increase of mail traffic and the introduction of unique fees for the entire country, regardless of distance.

Knowing that Moldavia already had a more efficient postal service than Wallachia since there, the use of the postage stamps had already been introduced, special measures had to be taken to improve the whole postal activity in Wallachia as well.

The postage stamps having the face values of 3, 6 and 30 parale were reproduced in the three colours of the national flag. The 3 parale postage stamp was yellow, the 6 parale red and the 30 parale blue. The printing of stamps was executed in “tête-bêche” position, on a rudimentary press brought from Iasi.

The images reproduced on the postage stamps were the heraldic signs of the two Principalities: the Wallachian eagle and the Moldavian bull.

In 1864, the second issue “United Principalities”, a machine printed postage stamps issue, was launched as were brought new equipments.

After ten years, in 1874, at Bern, by George Lahovary’s signature, Romania became one of the founding members of the General Postal Union (since 1878 – Universal Postal Union).

In 1948, the Universal Postal Union became a specialized institution of the United Nations Organization being the main forum for cooperation between the postal services and the accurate assurance of a universal network of services and products of the current post office.

In 2004, the 23rd UPU Congress took place in Bucharest, being the first Congress organized in an East European country.

The 24th UPU Congress was hosted by Geneva in 2008, a year when Romania organized the World Philatelic Exhibition EFIRO to mark the 150th anniversary since the issuing of the famous stamps “Bull’s Head -1858” by the postal services of Moldavia, only 18 years later since the putting into circulation of the first postage stamps in the world in Great Britain.

Between 24 September and 15 October 2012, the 25th Congress of the Universal Postal Union will take place in Doha, Qatar, a congress where the representatives of the 192 UPU member states will participate.

On the occasion of the 150th anniversary since the setting up of the Unified General Direction of Post from Romania, Romfilatelia introduces into circulation a postage stamps issue dedicated to this event which will be presented to the Congress in Doha, in the context of Romania’s participation to this assembly.

The stamp with the face value of lei 1.00 reproduces the images of the three stamps belonging to postage stamps issue „United Principalities”, released in 1862.

The stamp with the face value of lei 8.10 reproduces the image of the building of the Post Palace in Bucharest, built between 1894-1900 using the blueprints of the architect Alexandru Savulescu. 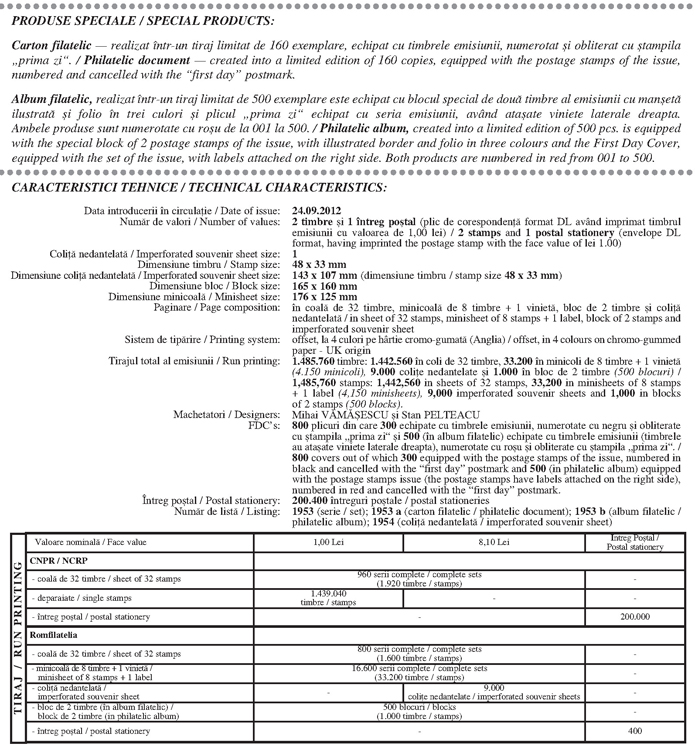