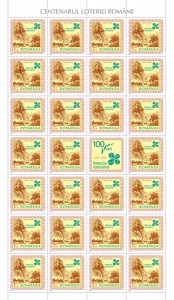 On the occasion of celebrating one century since the foundation of the Romanian Lottery, Romfilatelia, the specialized company in issuing and trading Romanian postage stamps, introduces into circulation the philatelic issue Romanian Lottery Centennial.
In 1906, 40 years of reign of King Charles I had passed, 25 years since the Proclamation of the Kingdom, and 1800 years since the conquest of Dacia by the Romans. In order to celebrate these three anniversaries, the Government decided to organize the General Romanian Exhibition. The funds allotted for the project from the State budget were much under the level of the estimated costs. Following the model of other countries, in order to obtain the necessary funds, the foundation of an Exhibition lottery was proposed (“Romanian Exhibition Lottery”). The sale of the lottery tickets to the public happened during the spring and summer of 1906. The lottery ticket of Lei 20 entitled the holder to ten visits to the Exhibition and to the shows organized in the Charles I Park, but also to a discount for the train travel across the country. The lottery witnessed a great success, due to the fact that the main gain was the sum of Lei 50,000. This way, the first step towards the foundation of a national lottery had been made.
Although the Romanian State had developed economically and a prosperous bourgeois class had emerged, in the rural environment the education and the sanitary system were almost inexistent. There was the clemency of certain associations or individuals to involve themselves for the improvement of the situation from this viewpoint, but this was still too little. As the State had no resources, the only solution was to found the State Lottery.
The birth certificate of the State Lottery, whose factual author was the surgeon and professor Thoma Ionescu, was called the Law for the formation of a sanitary assistance fund for villagers and it was promulgated by King Charles I, on May 29th, 1906. As a result of this fact, in the Official Gazette of July 12th, 1906, the Articles of Incorporation of the Company of the Romanian State Lottery were published together with its By-laws.

The history of the development of the Romanian Lottery continued, and here are its most important stages:
– in 1934, the State Lottery Authority was founded, charged with the organization of
lotteries in collaboration with cultural institutions;
– in 1944, through the Decree of January 31st, the exploitation and administration of the lottery was organized in classes, for public health and social protection;
– in 1949, the State Lottery Authority was transformed into the “State Lottery” Trading Company, being transferred under the guardianship of the Ministry of Finance;
– in 1954, the first “Lottery tickets” issues were launched, an original Romanian accomplishment, with great adherence to the mass of participants due to the fact that “on-the-spot” gains were offered;
– in 1958, the weekly publication “Loto-Pronosport” appeared;
– in 1991, the Lotteries and Sweepstakes Autonomous Authority was founded;
– in 1993, the off-line game systems became automatic;
– in 1994, based on the Government Decision no. 816, the National Lottery Autonomous Authority was founded;
– in 1999, the National Company of the Romanian Lottery was incorporated.
The original idea of the creation of the Romanian Lottery was based on a social component and, regardless of how it was called in time, State enterprise, company or authority, the Lottery attained its purpose, i.e. collect funds that were and are used for investments of public interest in the field of health, social protection, sports and culture.
The postage stamp of the philatelic issue, having the face value of RON 1.00, reproduces the layout of an old advertisment, in which the Goddess of Fortune (Fortuna) shares the money winnings from a cornucopia, over the cities and villages.

The philatelic issue was accomplished with the help of the Romanian Lottery.