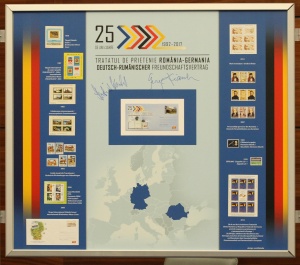 On Thursday, April 11, 2017, at the Ministry of Foreign Affairs headquarters, the Secretary of State for Bilateral and Strategic Affairs in the Euro-Atlantic Area, George Ciamba, and the Federal Government Delegate for Immigrants of German Origin and National Minorities, Hartmut Koschyk, signed, as co – presidents, the Protocol of the  20th Session of the Romanian – German Joint Governmental Commission on the Issues of German Natives in Romania. Romanian Philately marked this important moment by launching the postal stationary “25 years, the Friendship Treaty Romania Germany”. At this event, besides both two co-presidents, were present H.E. Cord Meier-Klodt, the Ambassador of Germany in Romania, Ovidiu Gant, the Deputy of the Democratic Forum of Germans in Romania, Dr. Paul-Jürgen Porr, the President of the Democratic Forum of Germans in Romania. Over time, Romfilatelia has successfully assumed the mission to contribute to the improvement of cultural relations between our country and the rest of the world, specifically responding to the development of Romania’s cooperation relations with other countries.

From this perspective, Mrs. Cristina Popescu, General Manager of Romfilatelia, made a brief presentation of the philatelic projects dedicated to the relations between these two countries. This was a good opportunity for recalling the joint stamp issue launching: “Romania-Germany – Biertan Fortified Church – Monument of World Heritage UNESCO”, which enjoyed the participation of Mr. Hartmut Koschyk, in his then capacity as Secretary of state for the Finance Ministry of Germany. We are proud that Romania has offered to the world a stamp issued by these two partner countries, with nominal values both ​​in lei and in euro, graphically illustrated by a Romanian artist, crossing the whole world with the message of Romanian-German diplomatic relations and friendship.

Today, as back then, our philatelic products bring together these two states and it represents one of the expression forms of the strong relations developed between Romania and Gemania, between people, cultures, past and future.

Mr. Hartmut Koschyk pointed out that Romanian stamps are very well received in Germany and appreciated, such common philatelic projects being considered representative for the universal heritage. He also showed his consideration for these bilateral relations, meant to stress the celebration of the Friendship Treaty, in an elegant and stately manner.

The ceremony ended with a solemn moment, both co-presidents signing the anniversary philatelic panel, appreciating the initiative and the result of previous collaborations, as well as the postal stationary dedicated to this 2017 anniversary.