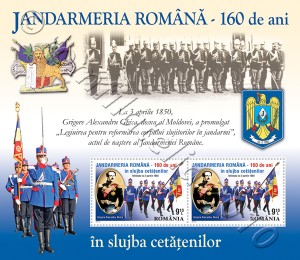 On this occasion, Romfilatelia introduces into circulation the postage stamps issue “The Romanian Gendarmerie – 160 years”.

Besides Grigore Alexandru Ghica´s Law, in 1893 and 1929 they also adopted the laws (of French inspiration) on the rural gendarmerie.

During the Independence War of 1877, the Balkan War from 1913 and the two world conflagrations, the Gendarmerie had a remarkable behaviour, both as a fighting force and a public order force.

In 1949, once with its organization according to a foreign model, namely the Latin one, the Gendarmerie lost a part of its attributions. After having changed several names, in 1989 the military institution was called security troops.

Today, the Gendarmerie has been reorganized, equipped and trained according to the model of the similar European Armies and it is able to assume the responsibilities accruing to Romania as a member of the European Union.

At a central level, the Romanian Gendarmerie is coordinated by the General Inspectorate of the Gendarmerie, at the level of each county there are County Inspectorates of Gendarmes, in the Capital there is the Bucharest General Directorate
of Gendarmes, and the Mobile Groups have territorial competence in 3-8 counties.

The elite unit of the Gendarmerie, “Vlad Tepes” Special Brigade for Intervention, made up exclusively of professionals, carries out its tasks of ensuring the public order and anti-terrorist intervention on the entire territory of the country. The special gendarme units, the training centers and the educational units for the training, improvement and specialization of the personnel of the Romanian Gendarmerie are also subordinated to the General Inspectorate. A proof of the fact that the Romanian gendarmes are appreciated as real professionals is the participation in 2002, under UN mandate, and in 2008, under EU mandate, to the peacekeeping missions in Kosovo and the monitoring mission in Georgia.

At the beginning of the century and millennium, the Romanian Gendarmerie, a modern elite corps, may be seen as a safe public order force, credible, stable, absolutely equidistant politically and trained at any moment to fulfill its missions in irreproachable conditions.

We kindly thank to the management of the Romanian Gendarmerie for the specialized documentation put at our disposal in the accomplishment of this postage stamps issue. 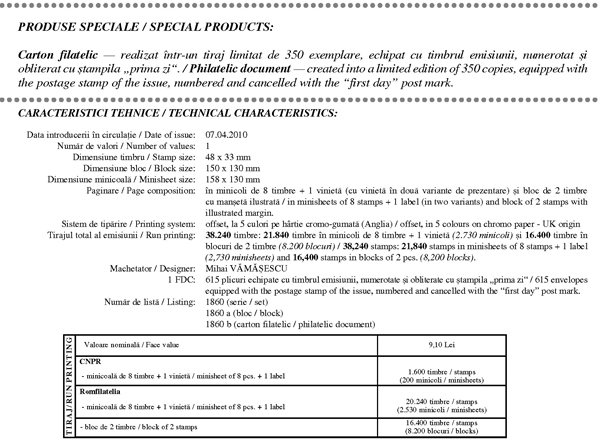