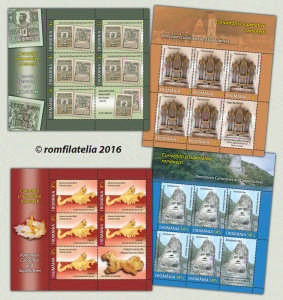 Do we know our country? Do we know what records weve gathered over time to showcase the achievements of Romanians who have shown great ingenuity and craftsmanship? You may consider this issue as an invitation in the unique world of excellence and exceptionality.
Bearing the title of Romanian curiosities and superlatives, Romfilatelia promotes on the postage stamps a series of superlative, Romanian works and discoveries.
The smallest banknote in the world, according to the World Records Academy (the stamp with the face value of lei 3) emerged as a necessity in 1917, in the midst of the World War, when King Ferdinand I decided to pull from circulation the money made of gold and silver and replacing them with low-value paper money, which were in high demand in times of need. Its low value (five bills would have bought a kilogram of bread) ensured a fast circulation of the bill. Thus the trade wheels were turning further, in a way that could not be supported by large currencies.
Paradoxically, times of inflation, with a large increase in prices, gave birth to the lowest value banknote, bani 10.
The banknote, issued by the Ministry of Finance at the time, has the size of 27.5 mm and 38 mm, with the colors green and orange. The face of the King is printed on the obverse, and on the reverse, Romanias coat of arms.
A special attraction for those traveling through the Apuseni Mountains is the mineralogical collection in Brad, known as the Gold Museum (the stamp with the face value of lei 3.30).
In Brad, Hunedoara county, in the only Museum of gold in Romania, the most beautiful forms in which gold is found in the depths of the earth can be seen, incredible replicas of objects, plants or animals. The museum was shaped over time, for over a century, through the discovery in the depths of spectacular and expressive forms of native gold and keeping them in a collection.
With 3993 pipes distributed on 84 rows, 63 sound registers and 76 levers, a separate room for the 9 bellows, the Buchholz organ of the Black Church in Brasov is the largest mechanical organ in Romania and among the largest in Europe (the stamp with the face value of lei 5).
The Buchholz organ is in its original condition, as it was built by craftsman Carl August Buchholz of Berlin between 1836 and 1839. The contract signed by the Evangelical community in Brasov and the Berliner manufacturer, in 1835, was worth 10.224 thalers, and the execution period was set at three years since the beginning of the work in 1836.
The largest tube is over 9 m high and the smallest is under 2 cm. The keyboards are covered with ivory, the higher ones are ebony and the registers names are engraved on porcelain plates and covered with glass. Ornaments (consoles, towers and gables) are provided with special gilded linden wood carvings.
On the rocky bank of the Danube, near the city of Orsova, is the largest stone sculpture in Europe, which reaches 42.9 m in height and 31.6 m in width (stamp with the face value of lei 14.50).
Made at the private initiative of the businessman Iosif Constantin Dragan, the bas-relief depicts the Last King of Dacia, Decebalus.
Access to the sculpture, the work of Italian sculptor Mario Galeotti, is done only by boat, the rock where it was carved being above the deepest portion of the Danube (120 m), the tools, scaffolding, pulleys, rollers for cableways and so on being brought in a similar manner. The identification panel of the monument has the carved inscription: Decebalus Rex Dragan Fecit.
Also worth mentioning is the fact that Mount Rushmore in South Dakota, a monumental bas-relief with a sculptural aspect, dedicated to the four American presidents, is only 18 m high.

Romfilatelia thanks the National Museum of Romanian History, the Evangelical Church C.A. of Romania-Brasov Parish, National Company of Copper, Gold and Iron MINVEST S.A. Deva and the Dragan European Foundation for the documentary support offered in the creation of this postage stamp issue. 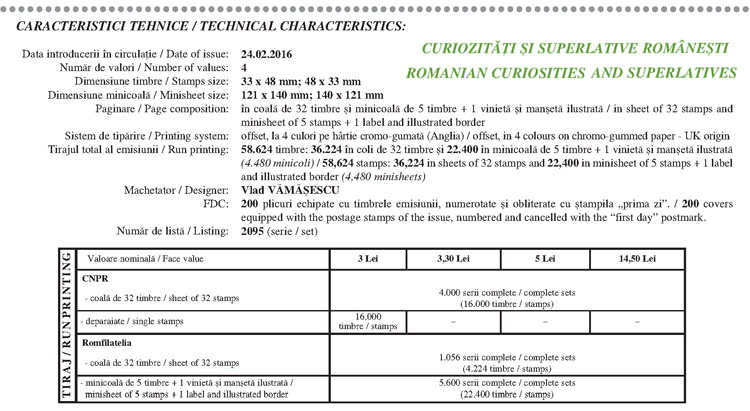