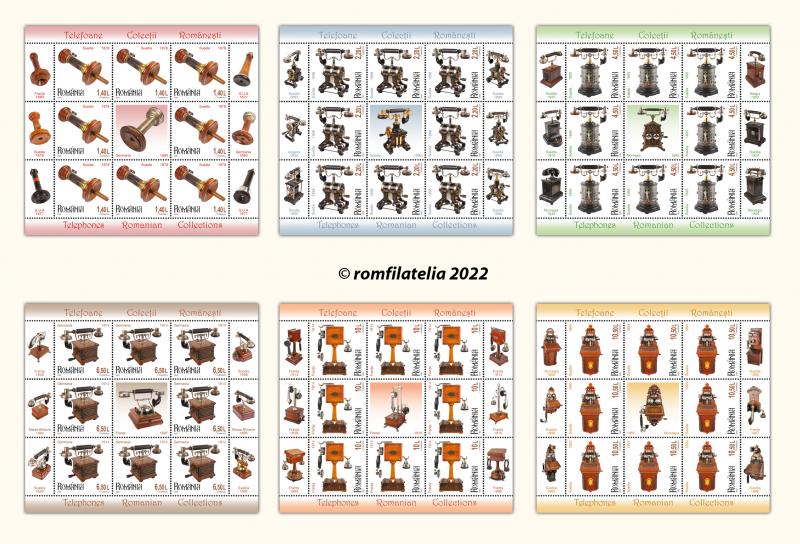 In homage to the inventor of the telephone, Romfilatelia continues the series of postal stamps issues Romanian Collections, with the theme Telephones.

Indispensable today, the telephone needed an inventor, engineer and scientist to continue his grandfather’s and father’s passions for for phonetics, speech technique and the human voice. This year marks 100 years since the death of Alexander Graham Bell, the one who received the first patent for the invention of the telephone in 1876 and who revolutionized the communication technique, which practically remained unchanged for more than a century. Bell defines his creed in the following words: “The inventor is a man who looks around the world and is not content with things as they are. He wants to improve whatever he sees, he wants to benefit the world”.

The Butterstamp telephone, depicted on the stamp with the face value of Lei 1.40, is an extremely rare one and is among the first telephone models produced. This telephone model was created in 1878, in the city of Stockholm in Sweden, by the company L.M. Ericsson, named after a Swedish inventor, Lars Magnus Ericsson, who was also its founder. The telephone is made of wood and brass, and the part which was hand-held during use is covered with leather. The shape of this telephone suggests that the transmitter and receiver were combined in the same unit, therefore it was used for both listening and speaking. Compared to other “Butterstamp” models, this telephone is also differentiated by the whistle-type ring tone that it has, a component that is removed during the use of the device.

The desk or office telephone known as Tunnan (Barrel), illustrated on the stamp with the face value of Lei 2.20, was produced in 1898, by A.B. Telefonfrabriken, in Stockholm, Sweden. This model was in direct competition with those produced by L.M. Ericsson, who produced the “Skeleton” (sewing machine) model. The latter has a crank for turning the armature between the magnets which produced the signal for the other end of the line. It was therefore essential that the telephone sit firmly and be built robustly. In addition, for the very heavy device to increase its appeal and provide a more consumer-friendly image, various parts have been nickel-plated and lacquered. AB Telefonfabriken differentiated their model by fitting a slightly curved sheet metal hood around the crank mechanism, which gave rise to the name “Tunnan”.

The Coffee grinder desk telephone is represented on the stamp with the face value of Lei 4.50. It was produced in 1895, Sweden, by L.M. Ericsson and the nickname was given because it resembled the famous Peugeot grinder model, popular at that time. With this cylindrical metal model, Ericsson took the first step in turning a simple device into a collector’s item and this model is also a trailblazer for the company. From this point on, Ericsson products, especially its telephones, featured colourful, artistically patterned, gold-plated markings on a black background. The gold border placed around the black background, typical of the time, was taken from the designs used by bookbinders to decorate their books.

The desk telephone with Art Nouveau design, reproducted on the stamp with the face value of Lei 6.50, was produced in 1914, Germany. The telephone has a walnut base and cover, metal body, inductor coil made of three parts and is operated by a rotary lever. It is also fitted with ring and recall button, receiver with speaker in upper fork painted with superbly decorated artistic design in Art Nouveau style. This style was a reaction to the academicism, eclecticism and historicism of the 19th century architecture and decorative arts. The sources of inspiration were mostly natural forms, such as the sinuous curves of flowers and plants.

The Grammont desk telephone, with the “EURIEULT” type 10 system, is illustrated on the stamp with the face value of Lei 10. This telephone with a mahogany case and an ebonite base, with the two receivers are inscribed “HYGIENOPHONE”, was produced by the company
“Société des Porcelaines et Appareillages Electriques Grammont” in the early 1900s in France. The Grammont enterprises equipped the French army with telephone wires and alarms for the arsenals. In time, it wil became one of the most prodigious companies in Europe. This fact as well as the production of numerous telephone terminals resulted in the emergence of the Grammont Telephone Company.

The model AB 650 wall telephone, depicted on the stamp with the face value of Lei 10.50, was produced in the 19th century, in 1893, by L.M. Ericsson, in Stockholm, Sweden, patented on October 29th, 1895. It has double nickel bell, a “fork” type receiver, battery box and writing table with glass plate, and the case is made of wood. The calls were made with the help of a magnet and the crank on the side, which operated the inductor, which transmitted the signal to the telephone station, from where the contact was made with the requested person. After becoming the main and most popular telephone manufacturer in Sweden, it also expanded abroad.

On the souvenir sheet, having the stamp with the face value of Lei 32, is the Crossley Patent wall telephone, produced in 1880, model no. 1115. It has a wooden diaphragm microphone and 4 carbon pencils. It is inscribed with the name of Berlin entrepreneur and owner Alex Bernstein, who was one of the first owners of telephones in Berlin. Phone performance increased from 100 yards to 8 miles thanks to the Crossley microphone. 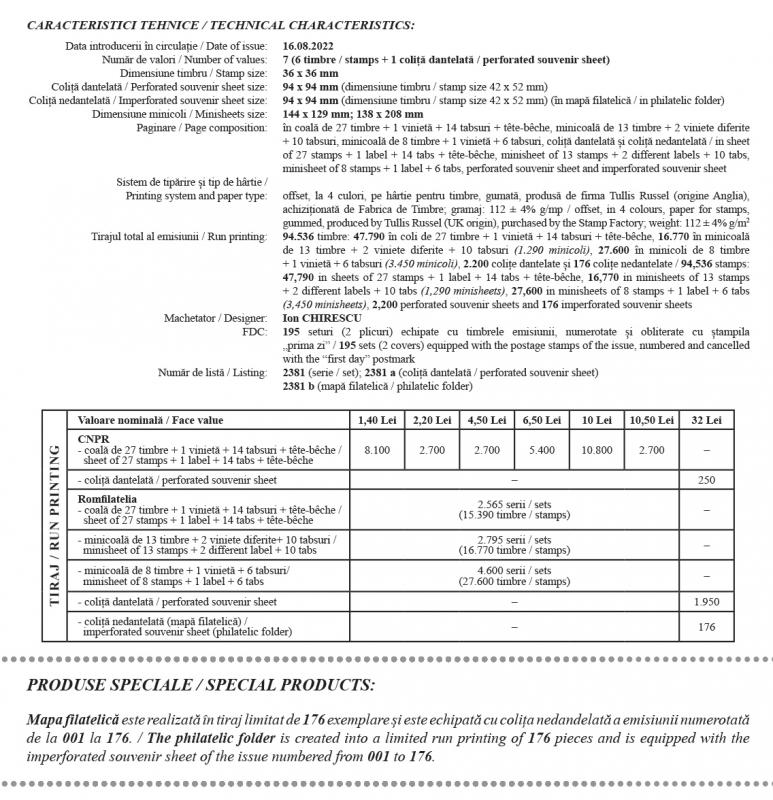