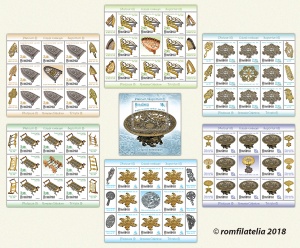 Romfilatelia continues the series of Romanian Collections postage stamp issues, this time with topic Plateaus / Trivets (I). The issue consists of six stamps and an imperforated souvenir sheet, on which trivets, a generic name designating the stands with more than three legs, as well as those with one leg and one base, from the 19 th-20th centuries are represented. These exhibits belonging to a prestigious collection from Bucharest, the greatest in the world, certified by Guiness World Records, in 2016.

On the stamp with the face value of Lei 2.20, an pressing iron support is represented.

The pressing iron protection is illustrated on the stamp with the face value of Lei 2.50.

The ornamental plateau is represented on the stamp with the face value of Lei 2.70.

The support with grate is reproduced on the stamp with the face value of Lei 3.50. 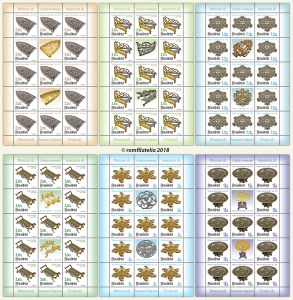 The plateau with floral motif is illustrated on the stamp with the face value of Lei 4.00.

Trivets represent those objects that are used to protect surfaces against damages caused by heat, their denomination came from the number of legs, most of them having three. In the beginning, when trivets were used for cooking on open fire, the three legs provided stability on an uneven terrain. Instead, the presence of four or more legs, as well as a single base with one leg, required an straight surface in order, for the object placed on the trivet stay firm and stable.

Depending on the period in which they were used, the role of trivets differed. When cooking evolved from the open space into the enclosed space, trivets were no longer used to prepare food directly on fire, but to protect tables or any other surface from burns, caused by hot objects.

The pressing iron support trivet dates back to the 19 th century. The piece, made of cast iron, has only three short legs, but with a fairly high contact surface with the ironing machine bottom. Thus, the iron heat does not affect fabrics or furniture. The cutout pattern is very elaborate, ensuring a low heat transfer.

A special trivet from the 19 th century is the pressing iron protection. This piece is especially made for ironing machines, with a part of heated metal, that was inserted into the ironing machine. The side decorations and the legs of the piece are made of brass. The cutout pattern is very high and prevents the wrong position of the ironing machine, thus eliminating the risk of accidental overturn.

The 19 th century ornamental plateau is made of cast iron and has six short legs. The piece, with an uncommon shape, is decorated with flowers and leaves. The trivet has a central flower-shaped cutout. On this support, ironing machines of different sizes and weights could be placed, as well as other hot objects.

The support with grate, another piece from the 19 th century, has four stylized legs and two wooden handles at the ends. The surface on which the ironing machine is placed is also stylized with cutouts. In addition, the pattern on this decorated surface is built of brass, unlike the rest of the trivet, which is made of iron.

The plateau with floral motif piece, belonging to the 20 th century, is made of brass in the shape of a rose, surrounded by leaves. It is supported by four small legs, also made of brass. The shape of the trivet, with its upwardly-oriented leaves, allows the positioning on its surface of an ironing machine, or of a hot object, but with a larger base.

The plateau with central leg, a beautifully-decorated cast-iron piece, from19 th century, has an exquisite execution, an elaborate and complex pattern illustrating the deities of the water, including Poseidon holding the trident. The leg and the base of the trivet were created in the same refined manner.

The philatelic album is created into a limited edition of 210 pcs. and is equipped with the imperforated souvenir sheet of the issue, having an illustrated attachment with graphic elements in gold foiling, and the set of two First Day Covers with the “first day” postmark clearly imprinted in gold foiling. Each element is numbered from 001 to 210. 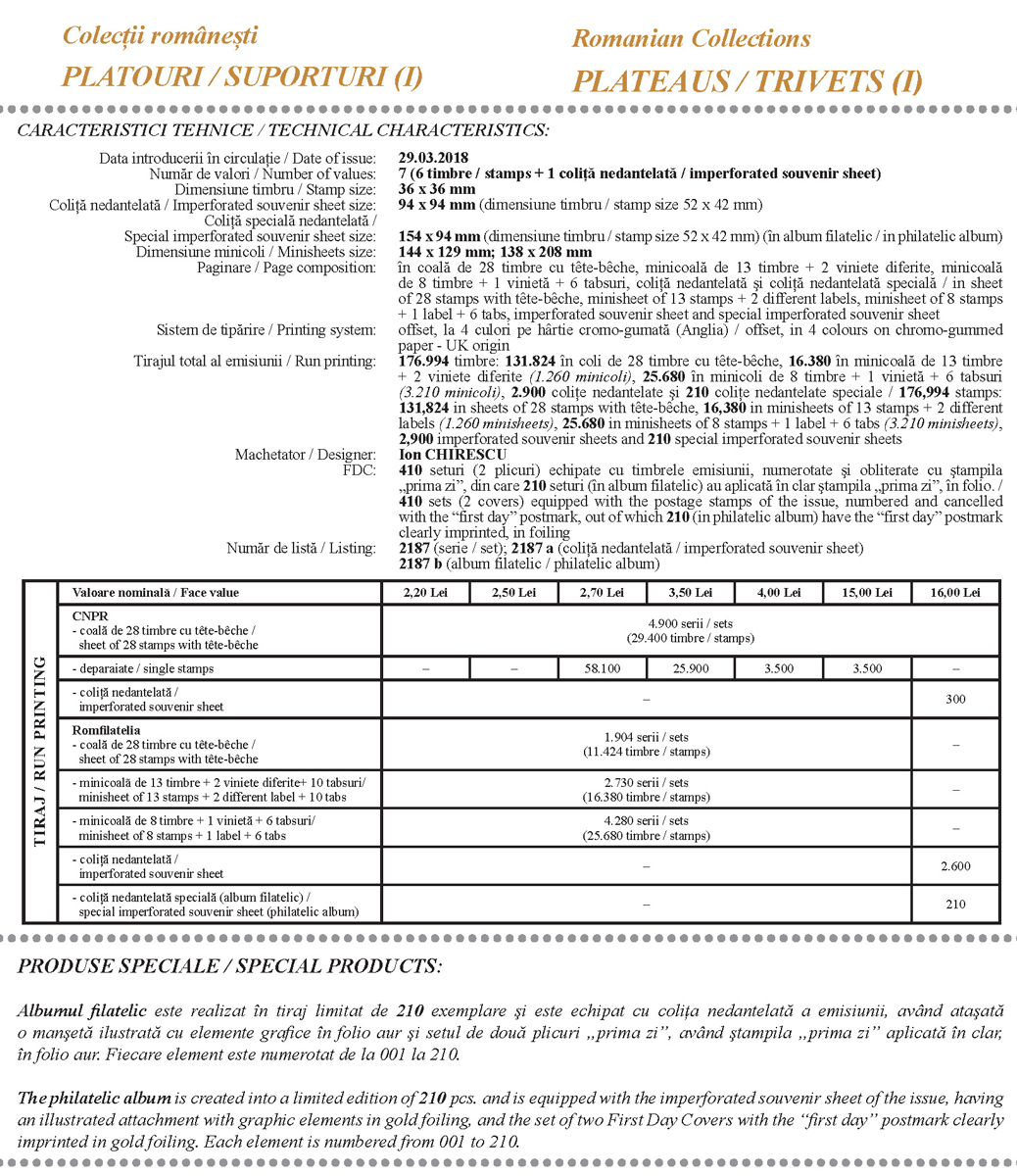