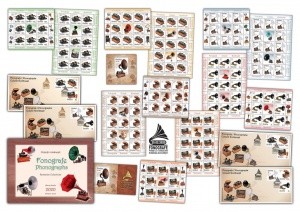 Romfilatelia dedicates a new postage stamps issue to the Romanian Collections series, entitled Phonographs that will be introduced into circulation, on Tuesday, 25th of February, current year.

On the postage stamps images are reproduced of exhibits belonging to a renowned collection from Bucharest, the biggest in the world, certified in the Guinness World Records in 2016. These can be admired in an organized exhibition space at the Museum of Romanian Records.

On the postage stamp with the face value of Lei 1.80, the Fondain Ducretet phonograph is represented. This phonograph is one of the first such devices used for sound recording, being created around 1880. The way it works is different from most of the phonographs we know at present, because the recording medium was a special one. Thus, the recording was done on a tinfoil, fitted on the cylinder. The user of the device had to speak loudly in the small horn and rotate the cylinder at a constant speed.

The Edison Home Phonograph is represented on the postage stamp with the face value of Lei 1.90. This phonograph model was created towards the end of 1896 and has been a successful device. The sound recording for this device was made using wax cylinders. The advantage of these cylinders made by Edison’s company was that they could be reused. In the United Kingdom, phonographs have been sold by Edison Bell, which is responsible for both the production and marketing of the devices and the maintenance of patents.

On the postage stamp with the face value of Lei 2 the Edison Bell phonograph with glass horn has been graphically illustrated. What is truly remarkable about this phonograph is its glass horn. The sound it plays is a special one and the fact that the horn is intact makes this piece very rare.

The Amberola Phonograph is graphically represented on the postage stamp with the face value Lei 3.30. This type of phonograph, created by Thomas Edison himself, dates back to 1918 and is different from other phonographs in that the horn is incorporated. Thus, the device no longer has an external, removable horn, but rather a resonance box for amplifying the sound.

The Lioret Phonograph, featured on the postage stamp with the face value of Lei 5, produced in France by Lioret in 1896 is a very rare piece. Few such phonographs were made and far fewer survived the passage of time. Henri Lioret was an important name in the music industry in France, managing to create talking dolls, in which he mounted celluloid cylinders. These cylinders were also used for his phonographs, intended for adults. Unlike wax cylinders, those made by Lioret from celluloid were much less demanding in terms of their use and storage. They were also much smaller in size, but still allowed somewhere within two minutes of playback. The mechanisms and engines of Lioret’s pieces are remarkable, and his phonographs are very difficult to find at present, being among the rarest pieces.

The Telegraphon was illustrated on the postage stamp with the face value of Lei 19. This recording device is, in fact, the first device to use magnetic principles for sound recording. Patented in 1898 by Valdemar Poulsen, an engineer from Denmark, the device has become very rare at present. They used very large wax cylinders, and their purpose was to record messages, even telephone messages, being the precursor to the telephone robot. At the 1900 World Exhibition in Paris, Poulsen recorded with his device the voice of the Emperor of Austria, Franz Josef.

Another device created by Edison, the Opera Phonograph, illustrated on the perforated souvenir sheet of the issue, with the face value of Lei 28.50, is impressive by its size and amplifying horn. Created from mahogany, the sound produced by this phonograph is a warm and powerful one. Also, its design is elegant, with a pleasant colour combination and mechanisms hidden from view. The large horn can be mounted on a special support and its weight is not taken over by the play head, protecting the mechanism and the wax cylinder. In addition, the horn can be mounted on the phonograph even if it has the lid on.

The philatelic album is created into a limited edition of 211 pcs. and is equipped with the perforated souvenir sheet of the issue, having a star-shaped safety perforated and attached an illustrated border with graphic element and texts in gold foiling, as well as the set of two First Day Covers with the “first day” postmark clearly imprinted in gold foiling. Each philatelic product included in this album is numbered from 001 to 211.

The postage stamps issue “Romanian Collections Phonographs” will be available on Tuesday, February 25th  2020, in Romfilatelia’s shops network in Bucharest, Bacau, Brasov, Cluj-Napoca, Iasi and Timisoara and online on https://romfilatelia.ro/store/. 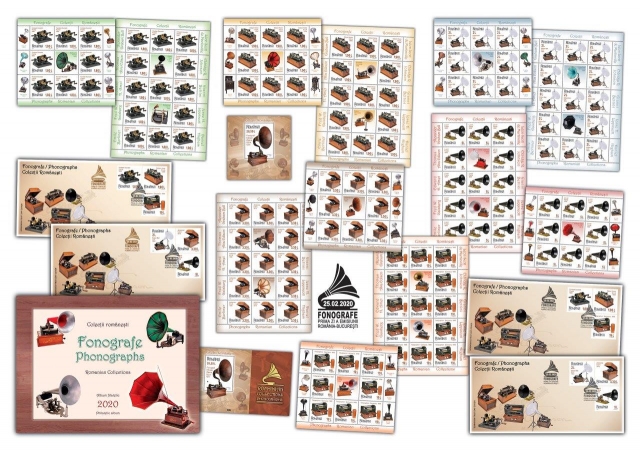 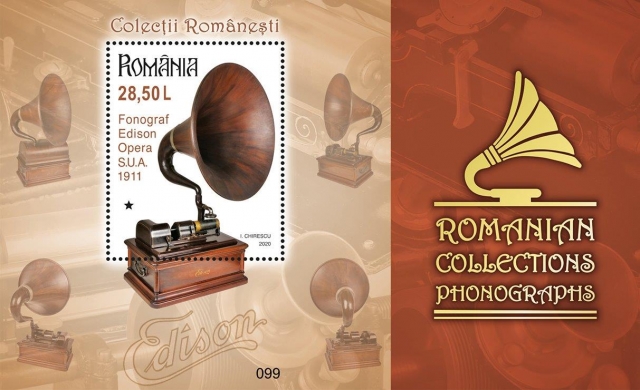 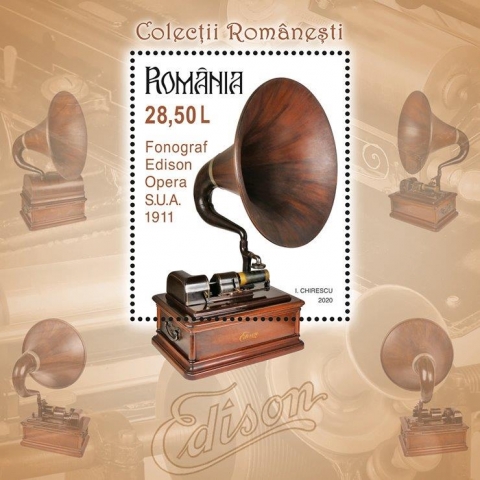 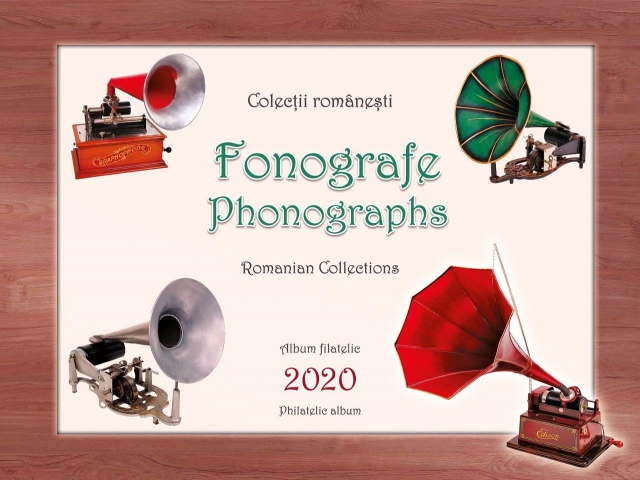 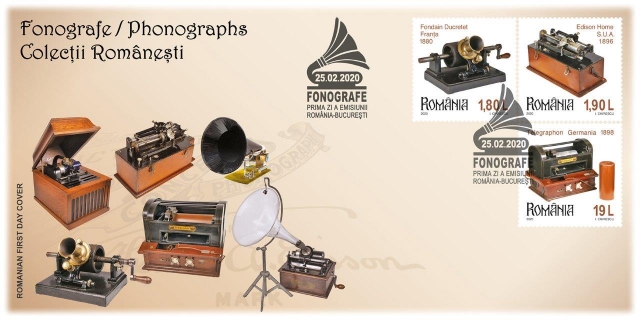 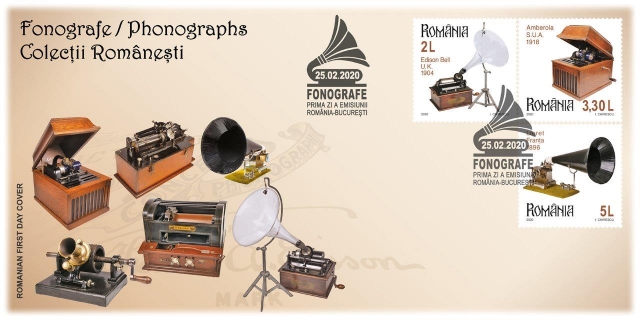 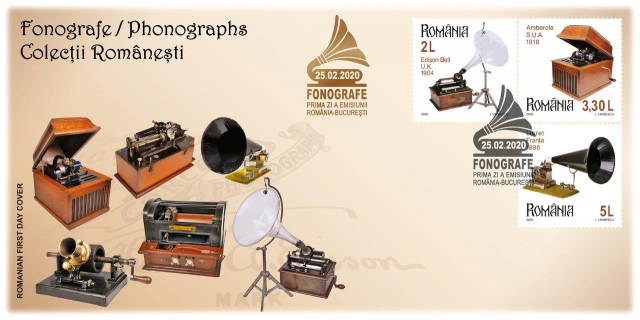 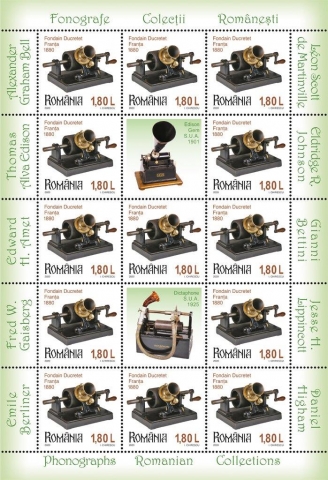 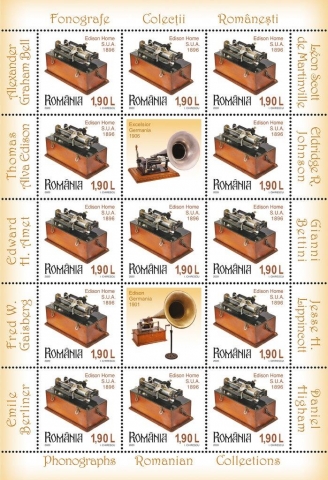 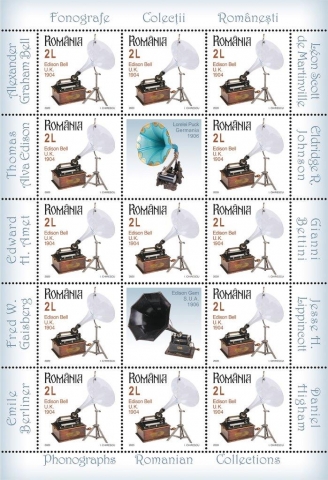 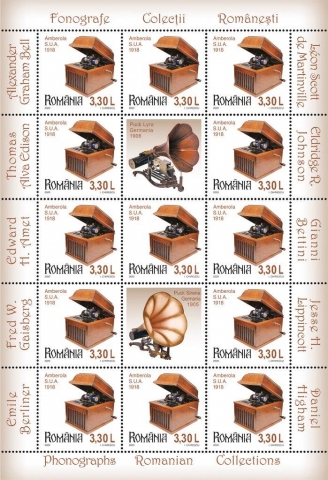 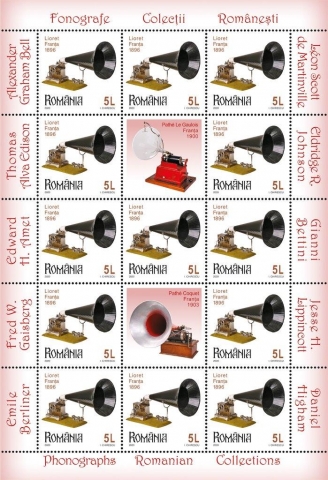 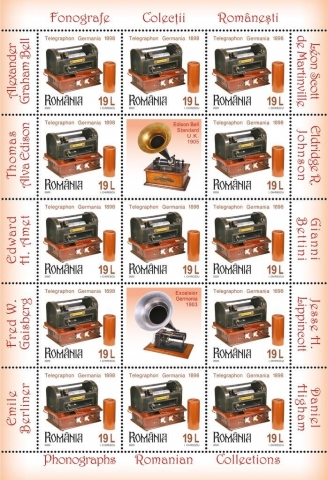 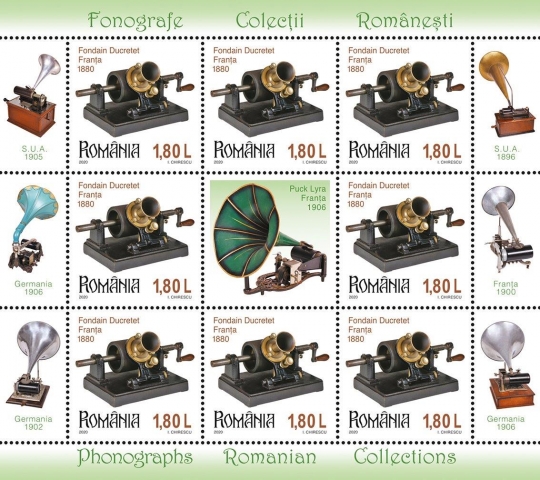 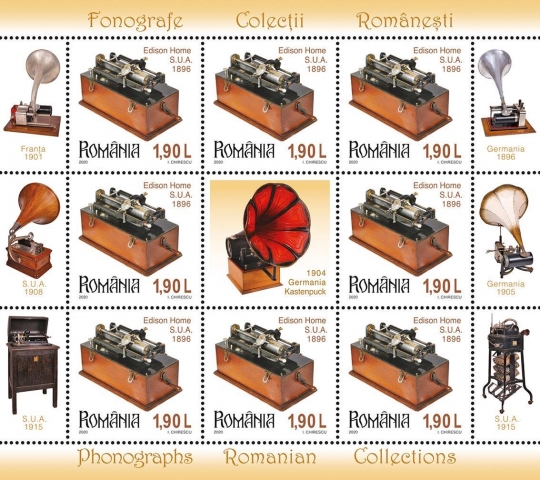 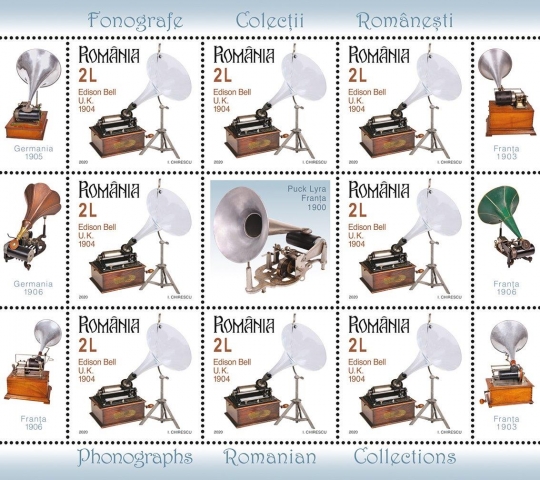 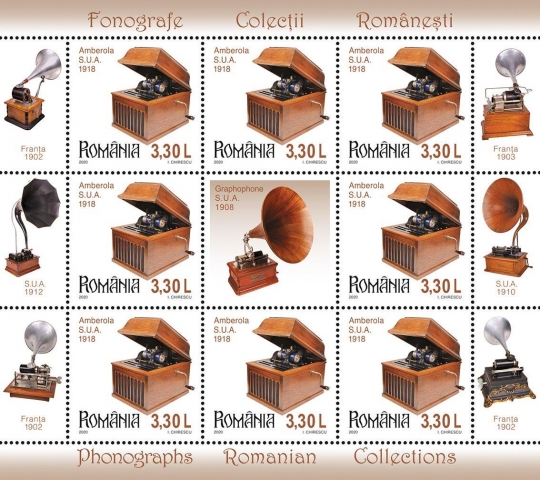 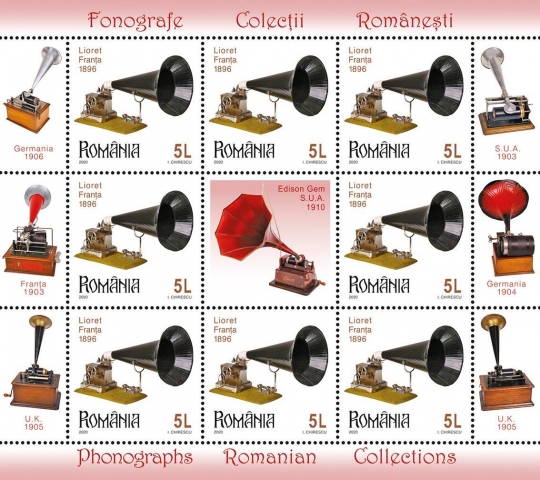 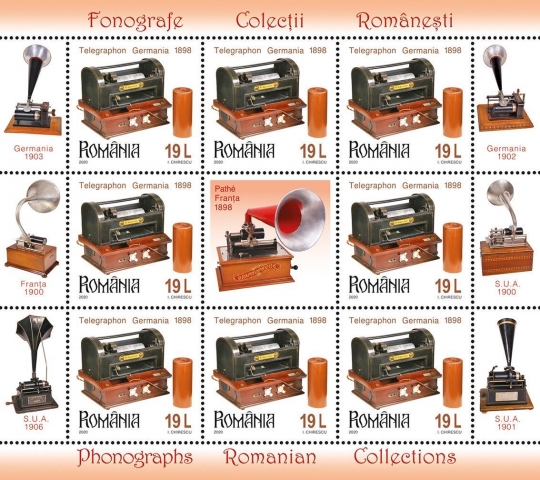 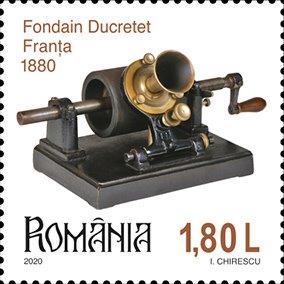 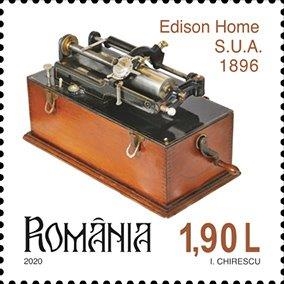 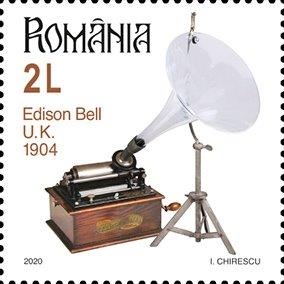 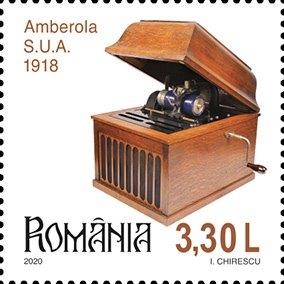 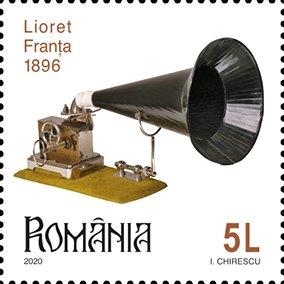 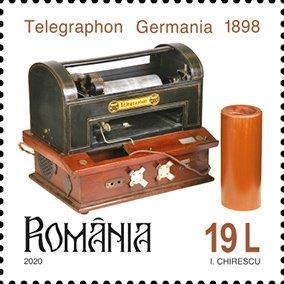