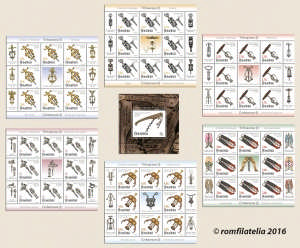 The historical evolution of the corkscrew can be seen in the largest collection in the world, located in Bucharest. The collection was certified by Guinness World Records in 2015 and, meanwhile, it came to surpass 26,000 different pieces. Not only the number is impressive, but also the quality of the pieces.

Romfilatelia dedicates to this valuable collection a new philatelic issue from the series Romanian Collections: Corkscrews (I), consisting of seven values.
The corkscrews are divided into categories by combining the technical principle of removing the stopper with the aesthetics aspect. Therefore, there are to be found in the collection, corkscrews with a simple lever, double lever or multi lever, mechanical corkscrews with different mechanisms that assist the user in the opening of the bottle and ¬removing the cork from the spire, but there are also corkscrews with no mechanism with beautifully decorated handles, true works of art. 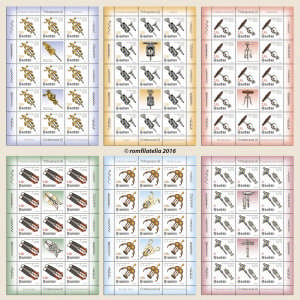 It is important to mention the fact that the materials used range from ordinary iron, passing through brass or bronze, to reach corkscrews crafted in precious metals such as gold and silver, or whose handles are carved in ivory or bone.

One can easily identify the world’s first corkscrew for which a patent was issued. In Great Britain, the Reverend Samuel Henshall submitted and obtained, in 1795, the first patent for a device used in the opening of wine bottles, which was produced in cooperation with the So-Ho factories in Birmingham. After that, there was an explosion of patents and inventions both in Great Britain and in other European countries. Subsequently, the corkscrew crossed the ocean and experienced an exciting development in the United States of America, and this extraordinary variation of patents and design can be seen in Romania.

On the stamp with the face value of Lei 1.80 a corkscrew of Italian provenance is represented, which portrays the god Bacchus as a child, straddling a barrel, drinking wine and partying with two satyrs. It is estimated that it was created in the 19th century.

The stamp with the face value of Lei 2.20 represents a cage corkscrew dating from the second half of the 18th century. The model is French and is one of the oldest types of such instruments. Cage corkscrews are very rare and are made of ivory, wood, iron or silver. The illustrated piece is made of a thin sheet of metal, rolled and glued by brass plating.

The stamp with the face value of Lei 2.70 represents a mechanic corkscrew, whose value is given, mostly, by the origin of the metal it was created from. It was made of metal from the foot of the old London Bridge, built in 1176 and demolished in the early 1830s. It is inscribed: “Made from the iron shoe that was taken from a pillar that was 656 years in the foundation of old London Bridge, by I. Ovenston, 72 Gt. Titchfield St., London”.

On the stamp with the face value of Lei 3.50 is represented a collapsible corkscrew, “lady legs” type. This type of corkscrew started being produced in Germany since 1873 and experienced a variety of ¬materials and colour combinations. This rare version with boots turned inwards, in opposite to the usual pieces, was patented in 1894, in Germany, and is inscribed on the rod with “D.R.G.M. 28284”.

The stamp with the face value of Lei 4.50 represents a double lever corkscrew, shaped like an owl, which is among the most sought after American corkscrews of the 20th century. It was produced and patented on April 26th, 1938, by Richard G. Smythe. To extract the cork, it is necessary to press the two arms of the lever until they are close to the body of the corkscrew.

On the stamp with the face value of Lei 8 is represented a corkscrew made in the second half of the 19th century in the Netherlands. It is made of silver and embodies an angel or cherub.

The souvenir sheet illustrates a waiter’s corkscrew, which is inscribed, thus becoming a kind of advertising support for sparkling water and Georg Fleischer’s factory in Brasov. 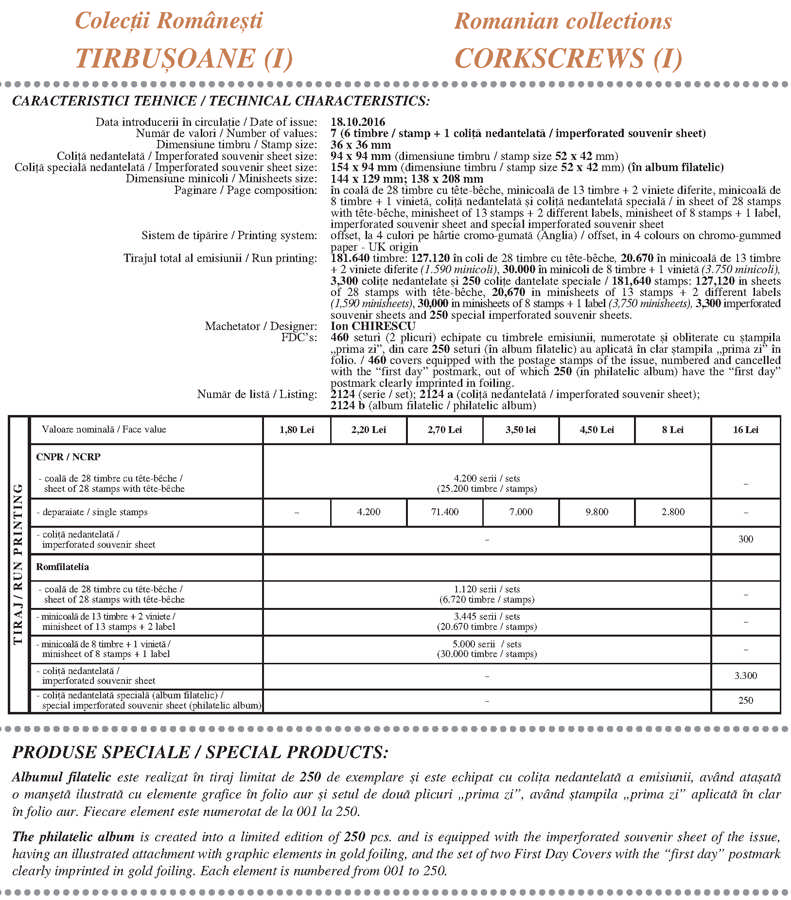