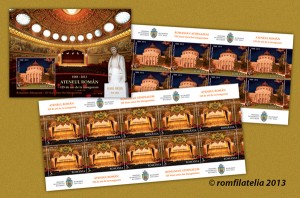 The Literary Society Romanian Athenaeum was established in1865 as a promoter of the spreading of cultural and scientific knowledge. The most famous of its members included Constantin Esarcu, V.A. Urechia and Dr. N. Kretulescu.

Their wish to build the headquarters for the Society had to overcome a real obstacle: the lack of funds. Fighting restlessly for achieving their goal, the important members of the Society appealed to the voluntary contribution of the town citizens, who were prompted by the slogan: “Donate one leu for the Athenaeum!”

Touched by the importance of the slogan, the popular singers performing on the terraces and restaurants in Bucharesthad adapted the lyrics of a popular party song: “I have a leu and I want to drink / and neither that is mine” into “I have a leu but I won’t drink it / I’ll donate it for the Athenaeum”.

This construction, a symbol ofBucharest, was built on the ground where in the 17th century and the beginning of the 18th century had been planted one of the town orchards, owned by the Vacaresti family. A church, which subsequently became a “metoc” monastery of the Ramnicu Diocese, was once on the place of the current edifice.

After the religious building was demolished, the land became the property of the Romanian Equestrian Society which wanted to establish a manège for horseback riding and circus shows. First was casted the foundation of the future premises in order to correspond to the initial purpose.

With no further progress of the work, the land was bought by the Romanian Athenaeum Society which used the circular foundation to build the new edifice.

Between 1886-1888, the circular structure, with the façade as a Greek temple with its eight Ionic columns having similar proportions to the columns of the Erechteion temple on the Acropolis, is built according to the drawings of the French architect Albert Galleron, who was helped by the Romanian architect Constantin Baicoianu. For a better coordination, the project was finalised with the collaboration of other famous Romanian architects which included Grigore Cerchez, Constantin Olanescu, Ion Mincu and Ion Grigore Cantacuzino.

All around the large dome of the edifice can be seen, carved on the ceiling, the names of several important persons: Miron Costin, Gheorghe Sincai, Dimitrie Cantemir, Heliade Rãdulescu, Timotei Cipariu. The interior of this monument, symbol of the Romanian Capital, impresses everyone by its splendour, reinforced by the four spiral stairways made ofCarraramarble as well as by the decorative sculptures manufactured by Italian and German artists and by the other rich ornaments.

The large, circular hallway displays 12 Doric metal columns, wrapped in ash-pink stucco simulating the marble colour. The Concert Hall, with a 28.50 m diameter and 16 m height, is situated at the upper level and has almost 1,000 seats and a very good acoustics.

The first conference organised in the new venue was held by Alexandru Odobescu on 14th of February 1888. Afterwards, at the Athenaeum also followed: Barbu Delavrancea, B. Petriceicu Hasdeu, Victor Babes and many others.

The garden front of the Athenaeum, bordered by trees, with flowers and turf lawns, hosts the statue of Mihai Eminescu, the Morning Star of Romanian Poetry. The statue is the work of the sculptor Gh. Anghel.

Upon the initiative of Alexandru Odobescu and Constantin Enescu, a monumental fresco was painted on the circular wall of the Concert Hall. Work of painter Costin Petrescu, the fresco is 75 meter long and 3 meter wide, including in its great composition 25 important moments in the history of the Romanians.

The work was finalised in 1938 and the funds were obtained by public subscription.

As temporary headquarters of the Chamber of Deputies (1919 – 1920), the Romanian Athenaeum hosted the historical assembly which ratified, in the Grand Hall of the edifice, the Unification document of Transylvania, Bessarabia and Bukovina withRomania.

On the occasion of 125 years since the inauguration of the Romanian Athenaeum, Romfilatelia introduces into circulation a postage stamps issue dedicated to this event.

We would like to thank George Enescu Philharmonic in Bucharest for the documentary support granted in the accomplishment of this postage stamps issue.
Issue date: 2013-02-22 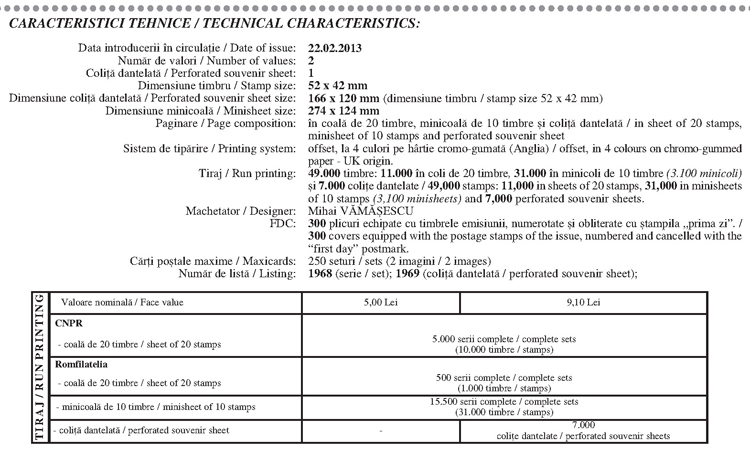