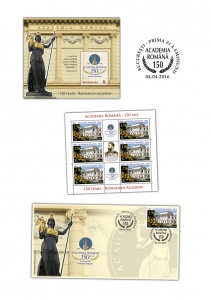 In its mission to represent Romania as an efficient and reliable ambassador, the stamp has encompessed in its small size topics which define our country, themes from culture, history, art, and have thus promoted Romanian values and symbols.

In its latest project, Romfilatelia celebrates on the postage stamp a beautiful anniversary of the highest forum of reflection and intellectual, literary and artistic creativity of the Romanian people.

At the celebration of 150 years of existence, the postage stamp issue Romanian Academy, 150 years marks the anniversary of a prestigious institution – national landmark and model within the Romanian society, whose role is, undoubtedly, to defend cultural identity. The philatelic elements of the issue can be purchased starting with Monday, April 4th, 2016, in Romfilatelia’s stores in Bucharest, Bacau, Brasov, Cluj-Napoca, Iasi and Timisoara.

Over time, numerous members of the Romanian Academy have been illustrated on the national stamps, thus enriching the philatelic heritage with remarkable Romanians, whose genius remains deeply impregnated in the spirit and identity of our country and people.

These valuable philatelic issues have included a large number of elites from the prestigious institution, specifically 113 members, outstanding representatives from a wide range of fields: literature, history, art, philosophy, physics, chemistry, mathematics, inventics, biology, sociology, research, etc. They are prominent personalities who have created an important cultural, historical and scientific heritage, exceptional Romanians whom the stamp, national symbol, was honoured to worship.

At anniversary moment, the postage stamp issue Romanian Academy, 150 years joins the projects keeping alive the memory and accomplishments of these eminent Romanians, and celebrates a special moment from the existence of the supreme Romanian institution of culture and science.

The two values of the issue, the stamp with the face value of lei 5.00 and the perforated souvenir sheet with the face value of lei 8.00, illustrate the building of the Romanian Academy, with its façade and ornamental details. The anniversary logo and the goddess Minerva, elements found on the souvenir sheet and the first day cover of the issue, provide a unified graphic presentation and emphasize the symbolism and importance of the event.

The issue is completed by a first day cover, and as page composition were used the sheet of
32 stamps, the minisheet of 6 stamps + 3 labels and the perforated souvenir sheet.

Romfilatelia thanks the Romanian Academy for the documentary support granted in the creation of this postage stamp issue.