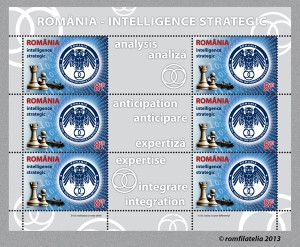 A result of the concern for the reform of the national security system in terms of turning the traditional intelligence cycle into analysis-based models, better tailored to the need for information of the lawful beneficiaries, the establishment of the National Intelligence Community and of the Integrated Intelligence Office – in 2005 by Decision of the Supreme Council of National Defence (CSAT) – is the materialisation of an action fully connected with the dynamics of the contemporary security environment and with Romania’s status as NATO and EU member state.

At a crossroad between Intelligence and strategic decision-making in state, the National Intelligence Community is also an effect of the need for synchronous cooperation between the Intelligence structures, also playing a significant role in the anticipation of future developments, process meant to establish decisions made for the prevention of undesirable evolutions of potential risks.

Assuming its function of strategic analysis and integrated information resources management and acting according to the “need to know”-“need to share” principles, the Integrated Intelligence Office has already proved that it has the ability to meet the information needs of the decision-makers in the state, ranking from current ones to strategic evaluations.

The main challenge of the Intelligence analysis conducted by the Office is not the actual development of a precise forecast, but the timely and accurate provision of relevant analytical products – that are multi-sourced, complex, uniform and anticipatory – to provide a qualitative advantage when making strategic decisions and decisions in support of the security strategies and policies.

As a genuine promoter of the sharing culture, the Office was shaped over time as an optimum framework encouraging the exchange of ideas and knowledge between intelligence analysts and, also, between them and the academic and research environment, given that the information environment, although essential for Intelligence, cannot give all the answers to the security challenges. For this very reason, the Office has valued the opportunity to collaborate with the information and scientific environments, especially within the expertise section.

Naturally, the complex highly specialised process of assembling a large volume of data and information into analytical products for the use of decision – makers in the state cannot be possible without the essential contribution of the intelligence expert/analyst.

The Office has given a new perspective on the profile of the Intelligence analyst stimulating, on one hand, his opening towards systematic consulting and the exposure of his own views when confronted to alternative scenarios and points of view, provided by environments with real expertise and facilitating, on the other hand, his transformation into an explorer in the true meaning of the word, who is able to use all types of data and information, to cooperate with experts and to condense analytical models and methods in order to create integrated useful Intelligence.

Representative for the Office is the idea of knowledge worker and of knowledge as a stream where people mix experience and inspiration and create the added value, which is so useful these days.

Almost a decade after its establishment, the Integrated Intelligence Office may be considered as an exponent of knowledge society because it has consistently envisaged and has extended the knowledge to all decision – makers by promoting new patterns for estimating, evaluating and forecasting dangerous situations or opportunities for the Romanian State.

An entity not encumbered by the strict constraints imposed by the hierarchies specific to the traditional organisations – which make them slow and bureaucratic – the Office offers the alternative of an organisation based on intra and inter-institutional knowledge, its conversion into added value being the key to success and competitiveness in the society in which we live.

The postage stamp reproduces the logo of the Integrated Intelligence Office, whose heraldic symbol – the image of the owl – transposes the positive mythological meanings of wisdom, knowledge and study, the accuracy of its nocturnal sight signifying the dispersal of ignorance and facilitating anticipative access to truth and knowledge. These “prophetic” qualities are associated with the symbolism of the circle – element suggesting unity, whole and balance both at professional and analytical level, but also at inter-institutional cooperation level, developed by this integrating structure.

The joining of the chess pieces in the graphics symbolizes the state of watch and observation (the Rook), the dynamic element always going straight forward in pursuit of its goal (the Pawn) and the goal to be reached (the King), respectively. The background represents the row of binary numbers, which symbolizes the electronic information. The minisheets include, as original element, a UV visible image, namely a bird – an observer appearing from shadow.

We thank the Integrated Intelligence Office for the documentary assistance granted in the accomplishment of this postage stamps issue.
Issue date: 2013-11-29 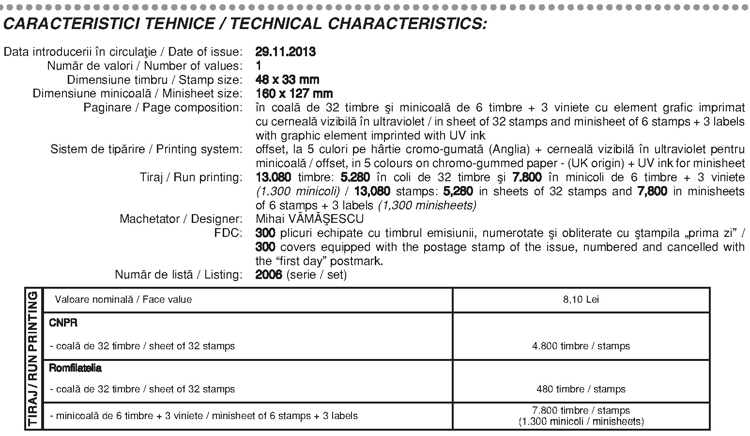