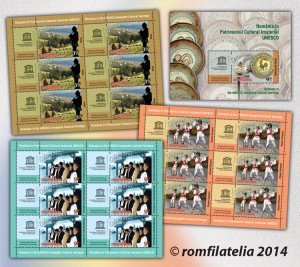 The Intangible Cultural Heritage includes oral traditions and expressions, having the language as its main vector, performing arts, social practices, rituals and festive events, knowledge and practices concerning nature and the universe, and the skills necessary to produce traditional crafts.

Romfilatelia dedicates the present issue of postage stamps to this special area, proudly promoting four of the Romanian traditional customs and manifestations, inscribed on the list of the UNESCO Intangible Cultural Heritage: the Calus ritual dance, nominated and accepted in November 2008, the Doina, inscribed in October 2009, the craftsmanship of Horezu ceramics, inscribed in December 2012, and the Men’s group Colindat, Christmas time ritual, the most recently inscribed on the list, in December 2013.

The Calus ritual dance, present since ancient times both in Moldavia and Transylvania, is performed nowadays in Muntenia, Oltenia and Ardeal (the sub-region of Orastie). This Romanian dance is traditionally performed the week before the Pentecost, being considered to have healing effects. Yet, there are historic documents mentioning the dance being performed on other occasions too, as it was the case of the dance performed by the soldiers of ruler Mihai Viteazul, called “the caluseri”, who were led by captain Baba Novac, for the celebration organised by Sigismund Bathory in 1599, at Piatra Caprei, close to Alba Iulia.

The Calus is related to the worship of an ancient equine god, known in the popular tradition of the Dacians as Calus, Calut or Calucean. The motifs on the dancers’ costume have names that recall the god’s name, the dance movements symbolising the trample and the behaviour of the horse.

The Romanian people crafted a true artistic heritage through literary works that served as ways to express their desires, sang their ancestral courage, and expressed their feelings and thoughts.

The Doina is one of the Romanian representative literary products that enrich the folk heritage along with fairy tales, ballads, and many other popular creations. The literary species of doina is a lyrical chant meant to express a wide range of feelings (of nostalgia, sadness or love) characterised by extraordinary depth, that can be sung with an instrumental accompaniment.

The Craftmanship of Horezu ceramics is a unique traditional craft, from the northern part of Valcea County, practiced both by men and women, the fabrication process being divided between them. Men select and extract the soil, which is then cleaned, cut and wetted, kneaded, trampled and mixed, becoming thus the clay body from which the famous red pottery of Horezu is produced. The women are those who decorate the objects using specific techniques and tools to draw traditional motifs. Their handicraft and talent to combine decorations and colours define the personality and uniqueness of this type of ceramics. The colours are vivid and include dark brown, red, green, blue and the “Horezu ivory”, being used to depict motifs such as the fish, the snake, the rooster, the tree of life, the oak leaf, etc.

The decision to introduce the traditional craftsmanship of Horezu ceramics on the representative list of the UNESCO Intangible Cultural Heritage represents the recognition of hundreds of years of unaltered tradition.

This is an old tradition characteristic of the Romanian culture. Its Latin origin was analysed many times, being universally accepted. This ritual has accompanied the Romanian people for centuries, guiding its life according to the laws of popular ethics and aesthetics. It encompasses important values of the musical, literary and choreography folklore, which have been retained through orality. The performing of the festive songs includes all the members of the community, each of them having their own role as part of the whole group. The custom, in full accordance with tradition, has played an educational role for hundreds of generations of children and young people, who have thus shaped and transmitted the intangible cultural heritage. There are on-going discussions on new proposals to be inscribed on the UNESCO list, such as the “The cultural practices associated to the 1st of March”, a joint nomination of Romania, the Republic of Moldavia, Macedonia and Bulgaria, submitted to UNESCO in March 2014 for inscription in 2015. Another proposal is “Spring celebration: Saint George’s Day/Hederllez”, a file nominated for inscription in November 2014 on the representative List of the UNESCO Intangible Cultural Heritage by Romania, the Republic of Moldavia, Turkey, Serbia, Macedonia and Croatia.

Romfilatelia would like to thank the Romanian National Commission for UNESCO and the Valcea County Museum for the documentary support granted in the accomplishment of this issue of postage stamps. 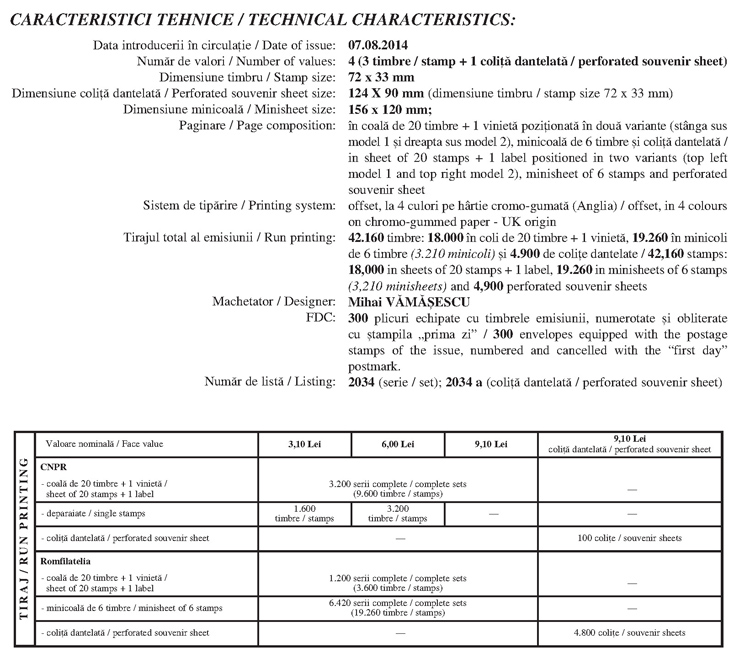