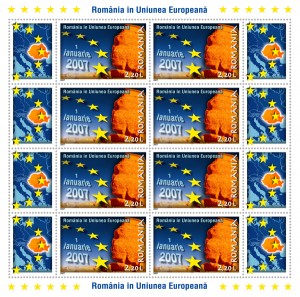 Romania was the first country in the Central and Eastern Europe to establish official
relationships with the European Community. In 1967, negotiations were started for the
signing of a series of technical-sectorial agreements and, later, in 1974, a bilateral treaty
was signed, followed by an agreement regarding industrial products, signed in 1980.
In 1990, diplomatic relationships with the European Union were established by
signing a Trade and Cooperation Agreement and, in 1993, Romania´s EU Association
Agreement was signed.
In 1995, Romania lodged the accession request to the Union, followed by the
decision of the European Council of Helsinki, in 1999, for the opening of negotiations
for Romania´s accession and for the official launching, in February 2000, of the
negotiation process.
After going through numerous stages of the accession process, in December 2003,
the European Council of Brussels established Romania´s accession calendar as
follows: completion of the negotiations in 2004 and signing, in 2005, of the Accession
Treaty, and the actual accession on the 1st of January 2007.
On the 25th of April 2005, in Luxembourg, Romania´s Accession Treaty to the
European Union was signed.
Followed the ratifications of the Treaty by the parliaments of the 25 member states
of the European Union, by the end of November 2006.
Marking, for the posterity, Romania´s affinity for the ideals of the modern and
democratic Europe, in 2006, on the 9th of May, on the Europe´s Day, on the Rose Island
in the Herãstrãu park of Bucharest, the inauguration of the monument dedicated to the
Founding Parents of the European Union took place, a unique monument in Europe.
The assembly, bordered by a circular space, has a round monument in the center,
made of marble and blue granite, with a mast in the middle, on top of which the
European Union flag is flied. Also, the yellow stars of the European flag are placed on
the granite, made of bronze. On the edge of the assembly there are 12 busts made of
bronze, placed in a circle, approximately 1.3 meter high, representing the founding
parents of the European Union.
These are: Jean Monnet, a French diplomat and businessman, Robert Schuman,
a former French prime-minister, Altiero Spinelli, an Italian politician, Alcide de Gasperi,
an Italian politician, Konrad Adenauer, former Chancellor of the Federal Germany,
Walter Hallstein, a German politician, Paul Henri Spaak, a Belgian politician, Jean
Rey, a former Belgian minister, Johann Willem Beyen, a former Dutch minister of
foreign affairs, Sicco Mansholt, a Dutch politician, Joseph Bech and Pierre Werner,
former prim-ministers from Luxembourg.
Romania´s entering the European Union, on the 1st of January 2007, represents
and shall represent a decisive moment for the social, economic and political progress
of a people who has persisted in the European Carpatho-Danubiano-Pontic space for
over two thousand years.
The postage stamp of the issue with the face value of RON 2.20, reproduces a
graphic design which reunites a symbol of oldness, durability and stability of the
Romanian people – The Sphinx from Bucegi – with the symbols of European
Union’s flag and the historical date January 1st, 2007.