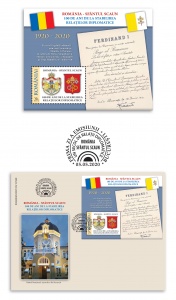 During the World War I, the Holy See was a supporter of the national desiderata of the Romanians, and at the end of 1918, recognized the Great National Assembly Decision of Alba Iulia and implicitly, the Great Union. In the years to come, the Holy See diplomatic corps was very active in the new States that emerged in Europe and was concerned with the recognition of the rights of Catholics.

Within the general trend, between Romania and the Holy See were inaugurated diplomatic relations at the level of legation (representation office) in June 1st, 1920. The first plenipotentiary minister of Romania attached to the Holy See was Dimitrie C. Pennescu, who came and appeared for duty on July 20th, 1920. The Holy See’s approval of his appointment was given three weeks after the publication of the royal decree in Bucharest, and the envoy from Holy See, Monsignor Francesco Marmaggi, came and appeared at Bucharest on October 17th of the same year.

The Apostolic Nunciature in Romania currently operates in the palace located 5-7, Painter Constantin Stahi Street. The edifice, illustrated on the First Day Cover, has been inaugurated in 1901, being commissioned by Franz Xaver von Hornstein, Archbishop of Bucharest in the period from 1896 to 1905.

The palace was designed by the Italian Giulio Magni, former chief architect of Bucharest, best known for the construction of the Trajan Hall. The palace erection was financed largely by Switzerland, the country of origin of the Archbishop von Hornstein, but also by a grant from King Carol I of Romania. Later, the building served as a Palace of the Archdiocese of Bucharest, and from 1922 it became the seat of the Apostolic Nunciature. In 1950, after the diplomatic relations with the Vatican were broken, it was seized by the State. The building was returned to the Catholic Church in 1990, and after the materialization of a consolidation and restoration project, it was reopened in November 1992, as the seat of the Apostolic Nunciature. During the visits to Romania, the Sovereign Pontiffs Pope John Paul II and Pope Francis chose to be accommodated in this palace.

The postage stamps issue “Romania – Holy See, 100 Years since the Establishment of Diplomatic Relations” will be available on Tuesday May 5th  2020, in Romfilatelia’s shops network in Bucharest, Bacau, Brasov, Cluj-Napoca, Iasi and Timisoara and online on https://romfilatelia.ro/store/. The postage stamps issue is completed by “first day” cover and perforated souvenir sheet. 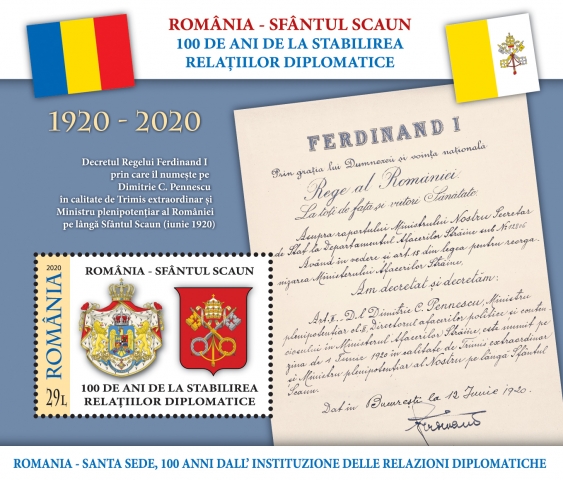 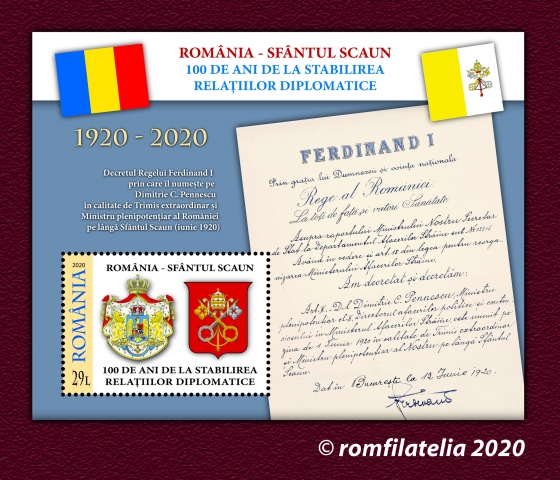 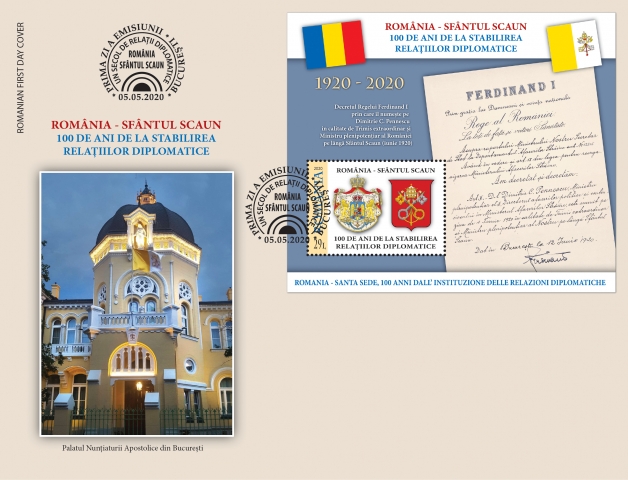 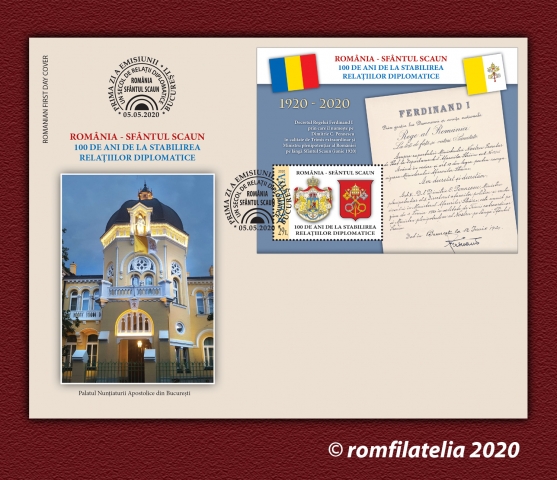 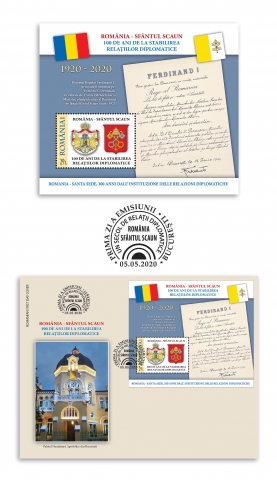