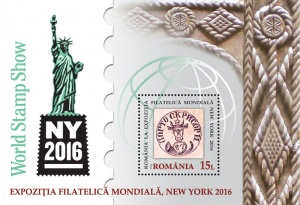 The latest postage stamp issue is dedicated to a large-scale event in the field of philately, which aims to promote the originality of philatelic events worldwide, the educational and cultural value of philately and also to stimulate the international philatelic trade.

This is the World Stamp Show New York 2016, which Romfilatelia marks by a philatelic project bearing the same title, which can be purchased starting with Saturday, May 28th, 2016, in Romfilatelia’s stores in Bucharest, Bacau, Brasov, Cluj-Napoca, Iasi and Timisoara.

Organized by the American Philatelic Society (APS), the World Stamp Show opens its doors between May 28 to June 4, bringing together, under the motto “Take a walk around the world”, over 50 postal administrations worldwide, over 200 of the most important and known dealers in world philately and over 50 philatelic clubs and societies worldwide.

It is the 11th World Stamp Show organized in New York, the first being in 1913, this year’s edition showing the visitors the private collection of John Lennon (member of the famous band The Beatles), displaying 500 postage stamps, mostly American and from New Zealand .

Through the postage stamp issue World Stamp Show New York 2016, Romfilatelia promotes this important worldwide philatelic event and also announces Romania’s participation to the exhibition, where visitors will admire the Romanian stamps and will learn about our country’s history and culture.

Romfilatelia’s participation to such a large event implies activities which will promote Romania’s image, symbols and values worldwide, the public being able to discover and get to know our country in an original way, through the postage stamps, genuine ambassadors of the Romanian heritage.

Moreover, Romfilatelia will also participate to the philatelic competition organized by the Universal Postal Union, where will promote and sustain the Romanian stamps and philately through the exibit “Romania, a land to be discovered”.

The philatelic issue World Stamp Show New York 2016 consists of a first day cover and a perforated souvenir sheet, whose stamp illustrates (through the stamp in stamp technique) the image of the
27 parale stamp of the Bull’s Head series, issued by the Principality of Moldavia in 1858. On the souvenir sheet’s border are illustrated the logo of the exhibition, along with elements of national identity (the Maramures gate).

Romfilatelia invites all participants to the exhibition to visit the society’s booth and discover the national stamps, bearers of messages and images which tell everlasting stories of the Romanian people.