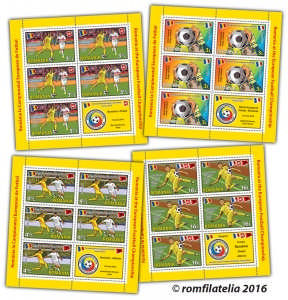 A note worthy tournament, the European Football Championship, began in 1960 in France, as the European Nations Trophy. The competition final, played by teams from Yugoslavia and the USSR was won by the Soviet squad. There were 17 teams entered in the competition.

Four years later, Spain would host the championship that brought together 25 teams. Of these, 16 teams qualified for the games that were played in the Barcelona and Madrid stadiums. The final match, played between the national teams of Spain and the Soviet Union, was won by Spain 2-1.

Starting with the 1968 edition, the tournament hosted by Italy, was held under a new name the European Football Championship. The final was won by Italy against Yugoslavia by 2-0.

Played every four years, the European Football Championship has had the winning teams of West Germany (1972), the Czech Republic (1976) and West Germany again (1980).

Romania’s national football team was present for the first time at the European Championships in 1984, managing to win leadership of the preliminary group which included Sweden, Czechoslovakia, Italy and Cyprus. The final tournament, in which Romania participated alongside the teams of Spain, West Germany and Portugal, had the trophy won by the Spanish team, which defeated France in the final match.

The following matches scheduled in the international competition in 1988 and 1992 have had in their list of winners the teams of the Netherlands and Denmark respectively.

At the 1996 edition, hosted by Great Britain, the Romanian team, after qualifying among the top 16 teams in Europe, was defeated by all three opponents in the preliminary group: Bulgaria, France and Spain.

Next followed the 2000 edition, in Belgium and the Netherlands, when Romania, present alongside other 15 teams, eliminated two strong teams from the competition, Great Britain and Germany. The ascent of our team was stopped in the quarterfinals by the defeat to Italy, which would later play France in the final and lose.

Romania did not take part in the tournament, hosted by Portugal, in 2004, which was marked by a big surprise from the Greek team, who won the trophy.

In 2008, Romania returned to the European Championship, the 13th edition, organized by Austria and Switzerland.

Present in a group of real value which included teams from the Netherlands, Italy and France, Romania lost its chance to continue to the matches that would determine the semifinalists of the competition, being defeated by the Netherlands in a decisive match.

At the tournament organized by Ukraine and Poland, in 2012, without the participation of Romania, the final was won by Spain, who defeated Italy 4-0.

The European Football Championship, Euro 2016 will take place in France. The inaugural game will be between the host and the Romanian teams. The Albanian and Swiss teams are also among the group in which we were assigned. The dates of the three games in which the Romanian national team is scheduled are June 10th, against France, and June 15th and 19th against Switzerland and Albania respectively.

The football fans in Romania hope that the players of our national team will manage to bring joy to their supporters with victories in the qualification group, which would permit the Romanian football to be in the list of the top-tier sporting European values.

On the occasion of Romania’s participation to the European Football Championship, Euro 2016, held from June 10th to July 10th in France, Romfilatelia dedicates to this important European sporting event a postage stamp issue, introduced into circulation on the inaugural day of the competition, June 10th, 2016.

Romfilatelia thanks the Romanian Football Federation for their support in the creation of this stamp issue. 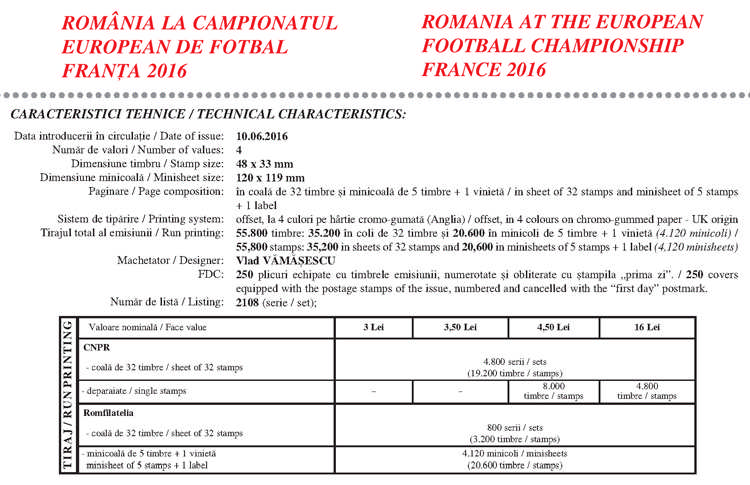