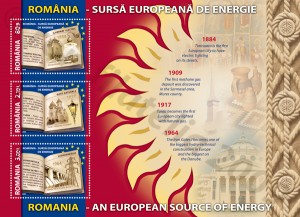 Through its geographical position, surface, population and natural reaches, Romania is playing first fiddle in the hierarchy of the European Union and NATO Member Countries.
Specific natural conditions, the existence of all forms of relief, the presence at the Southeastern border of the renowned Danube Delta, of the Black Sea coast, as well as the important length of the navigable route of the Danube river, all these offer Romania a true statute of independence regarding the exploitation of its natural resources and their transportation for internal use or for export.
The discovery of primordial energy resources such as coal, oil and natural gases brought Romania many European and international priorities.
In 1857, Romania was recorded in the international statistics as the first country industrially extracting oil (275 tons) and which built the first refinery in the world. Starting with the same year, the own production of lamp oil provided the possibility to use it in the public illumination system of Bucharest City, event which was a world première.
In 1884, after using the “air gas” (obtained through coal system) in the public lighting system, Timisoara City becomes the first European city to use the electric lamps lighting system.
After the implementation in Bucharest of the first electrical tramways in 1894, Timisoara starts using its own electrical tramways in 1899, and thus Romania obtains a leading position within the countries using such means of transportation.
Another European première is recorded in 1917 when Turda City becomes the first city powered and illuminated by natural gas, previously discovered in 1909 in Sarmasel area (Transylvania).
By developing a reliable gas transportation network, Romania accomplishes the first natural gas export into the European territory (Hungary – 1959).
By exploiting the rich hydrological potential, after the construction of the Bicaz and Vidraru hydroelectric power plants, Romania opened in cooperation with the former Yugoslavia (1964) the Iron Gates I site, finalizing in 1972 one of the largest hydrotechnical construction in Europe and one of the largest hydroelectric power plant on the Danube river. Today, there are a few hundred hydrotechnical developments in Romania, on the country’s interior rivers, but there are ambitious projects for the near future concerning the maximum use of this inexhaustible energy source – the hydro energy. One of these projects is represented by the finalization of the Tarnita hydroelectric power plant (Cluj County).
After starting the first nuclear reactor from the Cernavoda Nuclear Power Plant – 1996, Romania became a member of the “select club” of the countries owning nuclear plants. In 2007, the second reactor was opened, and during the period 2014-2015 there are plans to connect to the national energy networks the last two reactors of the Cernavoda Power Plant. The Romanian authorities are going to start building a new power plant, in Transylvania, which is going to be finalized until 2025.
Another inexhaustible source of energy is wind power and the wind parks construction that were started are going to be finalized in a very short time and one of the largest wind park in Europe is going to be built in the Dobrogea area.
The tradition of more than 150 years in the energy field, and also the continuous development possibilities of the different conventional and unconventional energy sources, the position of Romania’s capital, Bucharest, as a true European center, are a few of the major advantages held by Romania to become a permanent host of the Agency for the Cooperation of Energy Regulators (ACER).
In order to celebrate in an original way the national and international presence of Romania in the important events in the energy history and for joining our country’s authorities’ steps, especially those of the Ministry of Economics, for supporting Bucharest’s nomination as the host of ACER, Romfilatelia achieved a special postage stamps issue, under the title “Romanian – an European Source of Energy”.
The images on the three postage stamps of this issue show, in a suggestive manner, events of an European importance: the first European city with street electric lighting – Timisoara, the first European city illuminated with natural gases – Turda and the largest hydroelectric power plant on the Danube River – the Iron Gates I.
The perforated miniature sheet of the philatelic issue also presents in an original concept the three postage stamps of the issue with energy symbols – the sun and the turbine – and the representative images of spirituality, traditions and the cultural treasure belonging to the Romanian territory and all could be named under a suggestive title: Romania – history pages of Europe and energy!