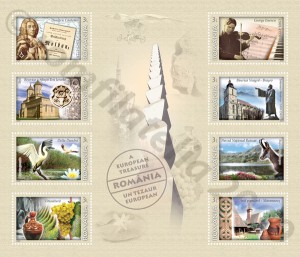 For documentary consulting granted at the carrying out of this philatelic issue we wish to thank the Administrations of the Retezat National Park (photo: Cristina Lazaroni) and of the Danube Delta Biosphere Reservation (photo: Daniel Petrescu), to the Administrations of the “George Enescu” Museum and of the Library of the Romanian Academy (Mr. Emanuel Badescu), to the Parish of the “Saint Three Hierarchs Church”, to the Evangelic Parish of the “Black Church” (photo: Peter Simon) and to VISARTA.