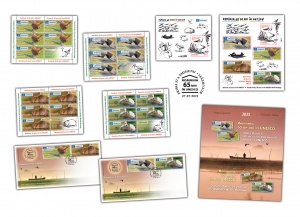 The United Nations Educational, Scientific and Cultural Organization (UNESCO) was established in 1945. Since July 27th, 1956, Romania is one of the UNESCO members.

One of UNESCO’s missions is to select and include on the List of World Heritage sites and monuments relevant from a natural or historical point of view, their safeguarding and conservation being important for the world community.

The Danube Delta became a UNESCO World Heritage Site in 1991. Its value was recognized by its inclusion in the international network of biosphere reserves (1990), within the “MAN AND BIOSPHERE” (MAB) Programme launched by UNESCO. The Danube Delta site (since May 21st, 1991) is also protected by the Ramsar Convention as a wetland of international importance, especially as a habitat for waterfowl.

November 16th was declared UNESCO World Heritage Day in Romania by the Law no 160/2013, in order to promote our elements of world heritage and for their better knowledge.

The four stamps of the issue show species of birds and mammals found in the Danube Delta. Some are representative of this region, while others are more widespread, existing in the Delta as well as in other areas of our country. All of them have their importance in the ecology of the Danube Delta, contributing to the remarkable biodiversity of this region.

On stamp with the face value of Lei 1.40 is illustrated the black stork (Ciconia nigra). It is a rare, solitary species that inhabits regions near lakes, rivers or swamps. In the Danube Delta it is present during the migration period.

On the stamp with the face value of Lei 1.50 is represented the Eurasian wren (Troglodytes troglodytes). The Eurasian wren is one of the smallest species of European birds. It is only 9-10 cm long and weighs 6-12 g. European populations are numerous, most sedentary (do not migrate), the species being widespread in a variety of habitats, from forests to reed beds.

The stamp with the face value of Lei 7 shows the European beaver (Castor fiber). It is one of the largest species of rodents, with a body length of 80-100 cm and a weight of up to 30 kg.

On the stamp with the face value Lei 19.50 is represented the Dalmatian pelican (Pelecanus crispus). It is an endangered species worldwide, being included in the “vulnerable” category on the IUCN Red List. With a wingspan of more than 3 meters and a weight of 10-12 kg, it is one of the most impressive birds in Europe. In Romania, it nests in a few colonies, in the Danube Delta and the Razim-Sinoe lagoon complex.

On the perforated souvenir sheet of the issue are represented, in a modern graphic, animals and plants from the Danube Delta, the illustrations being made by the appreciated artist Mircea Cantor, originating from Romania.

Mircea Cantor was born in 1977 in Oradea and currently lives in France. He is a painter, sculptor, illustrator, director, a representative of the conceptual avant-garde and a creator who communicates his messages through a wide range of means of artistic expression. It is for the first time when the artist collaborates in the development of a Romanian postage stamp issue.

“I wanted to reproduce, through the line of my drawing, the presence and richness of the biodiversity present in the Delta: in water (fish), on land (mammals) and in the air (birds). Basically, the trilogy of the defining elements of the Danube Delta: Water, Earth, Air.” The artist’s vision also reflects “the reference, also through drawing, to three other elements that complement those listed above, namely: the vegetable kingdom (water lily, reed), the animal kingdom (birds, fish) and the human environment (fishermen and human communities with traditions and lifestyle related to the Danube Delta area).”

On the two FDCs is represented a landscape specific to the Danube Delta, which evokes the human presence in the region and a traditional occupation of the locals – fishing.

Romfilatelia thanks Mr. Mircea Cantor, the Administration of the Danube Delta Biosphere Reserve, Permanent Delegation of Romania to UNESCO and “Grigore Antipa” National Museum of Natural History for their support in developing this postage stamps issue.

The postage stamps issue “Romania, 65 years in the UNESCO. Danube Delta, 30 years in the UNESCO World Heritage” will be available on Tuesday, 27th July 2021, in Romfilatelia’s shops network in Bucharest, Bacau, Brasov, Cluj-Napoca, Iasi and Timisoara and online on https://romfilatelia.ro/store/. 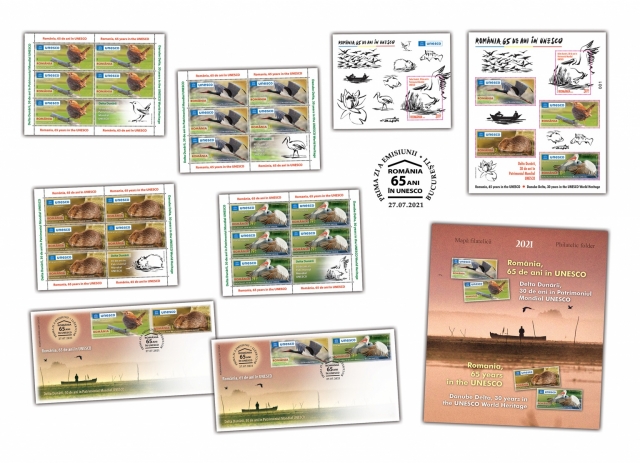 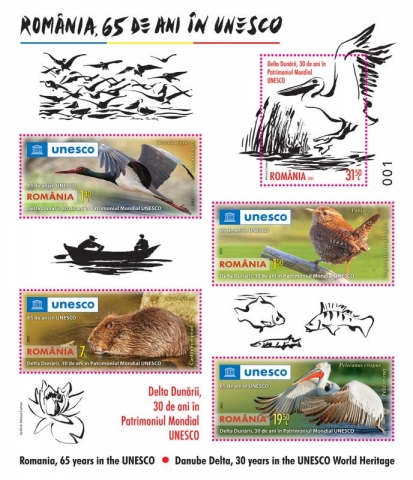 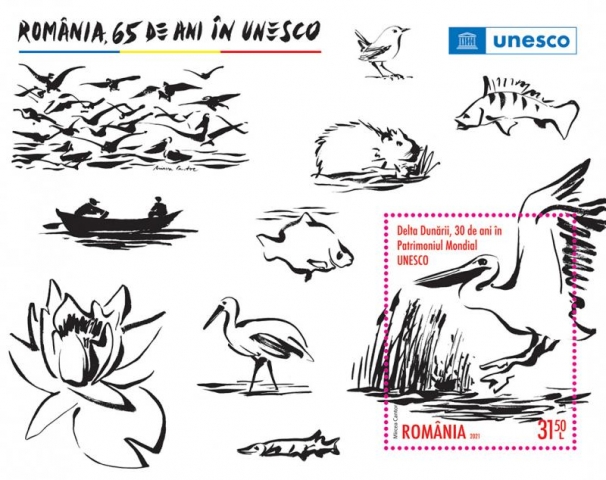 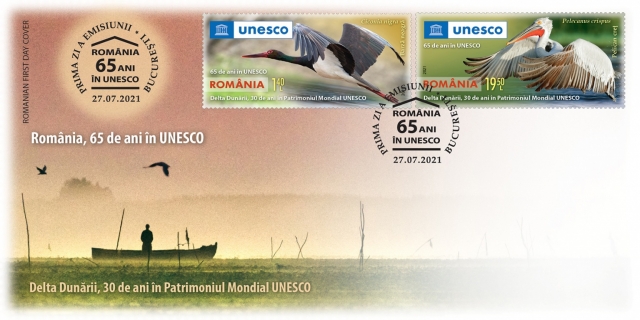 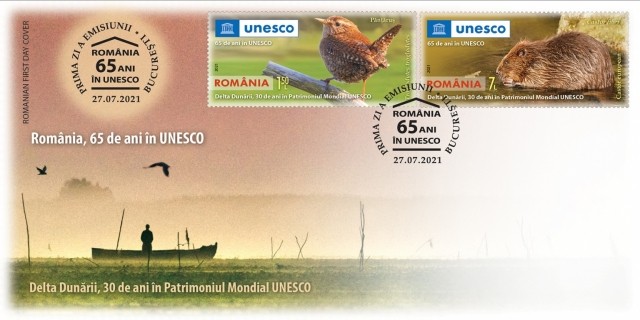 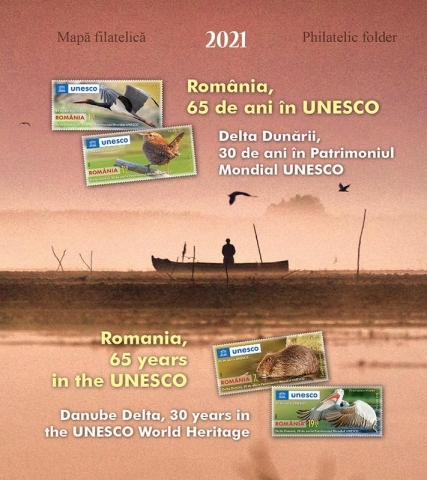 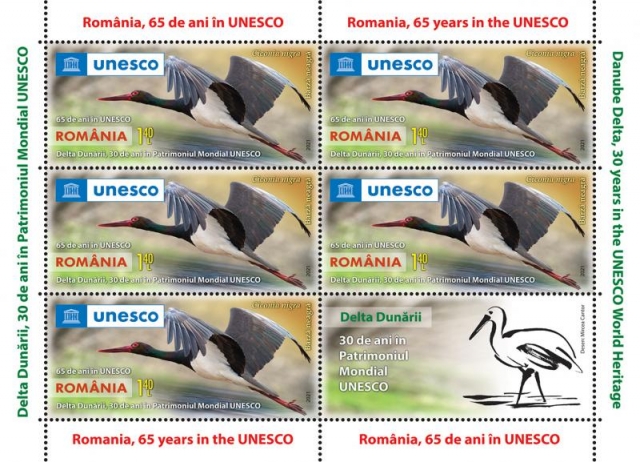 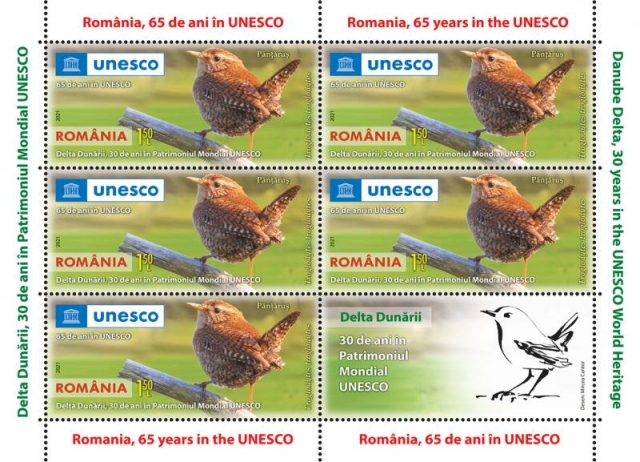 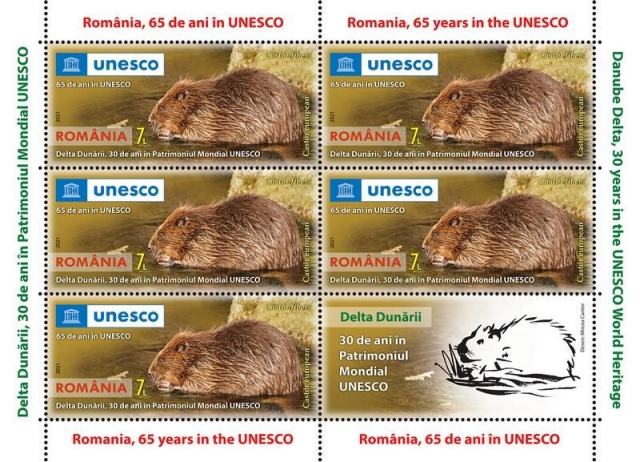 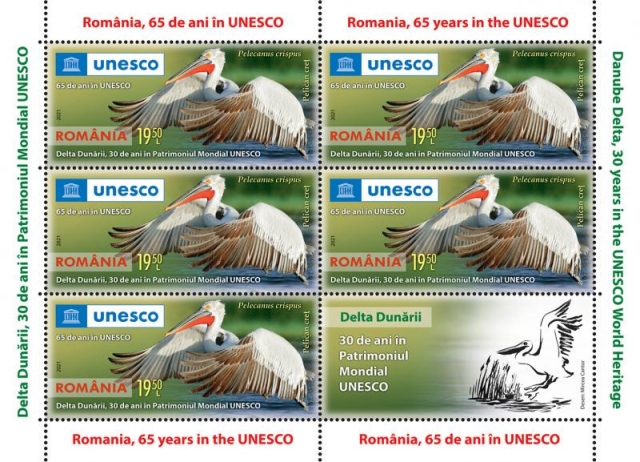