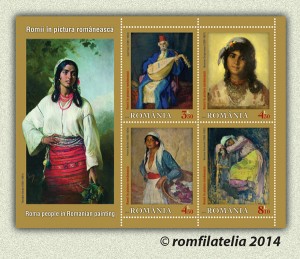 The Romanian Parliament decided, by Law no. 28/2011 of March 11th, that the Remembrance Day of the Roma Slavery Abolition should take place every year, on February 20th.

In this context, Romfilatelia dedicates to the Roma minority a postage stamps issue entitled Roma people in Romanian painting. The minority is represented nationally by the National Agency for Roma.

The vision of the Agency consists in a policy of transparency, both locally and within the Roma communities, of programs and projects, whose goal is to establish a dialogue involving all participants, including the civil society.

Taking into account the existing issues related to the Roma’s free movement within the European Union, the European Commission and the Council of Europe have launched in 2013 a programme to facilitate the access of Roma people – the largest ethnic minority in Europe – to housing, education, health and jobs in five countries:Hungary,Bulgaria,Italy,RomaniaandSlovakia.

The strategy is defined as a process providing that those at risk of poverty and social exclusion get the opportunities and the resources necessary to fully participate in the economic, social and cultural life, and enjoy life and wellbeing, considered normal in the society in which they live.

Romanian Government considers social inclusion of Roma as an aspect which should be reflected on the overall agenda of every central and local public institution.

The paintings reproduced on the stamps belong to the collection of the National Museum of Art ofRomania.

Iosif Iser (1881 – 1958) graduated from high school inBucharest, and studied painting inMunich andParis. He worked inFrance at theRanconAcademy, collaborating also with French publications to which he was providing satirical drawings. In 1936, together with Camil Ressu, Gheorghe Petrascu, Alexandru Steriade and other painters, he co-founded the „Arta” group. He participated to various exhibitions inRomania and abroad. He was initially inspired by Expressionism, but following some trips toSpain and the East, Iosif Iser adopts a clearer range of colours, with an exotic shading, his paintings achiving a state of equilibrium and grandeur. In 1955 he was elected member of theRomanianAcademy.

Nicolae Grigorescu (1838 – 1907), is considered the Master of Romanian painting. Beginning with 1861, together with Auguste Renoir, he visits regularly Sébastien Cornu’s studio inParis. Not long after, he joins theBarbizonSchool where he will complete his artistic education. Starting with 1873, he visitsRome,Naples, Pompei, thenGreece, and Wien inAustria to study. After 1890, the painter moves toRomania where most of his paintings depict rustic subjects: portraits of peasants, oxen carts, traditional Romanian lanscapes.

Pierre Bellet (1865 – 1924) was a Romanian painter, coming from a French family and born inGalati. There are no public data about his activity in the Romanian school, but it is know nthat he attended the National School of Fine Arts inParis, being a free auditor in the workshops of Alexander Cabanel and Benjamin-Constant. The first will exert a profound influence, at least around the year 1900 (compositions with orientalist notes, historical themes, etc.). He is present twice at the Official Salon in the French capital (1890, 1891) and succeeds to be rewarded with a mention both times. After returning home, he works inBucharest, and his art reaches its climax in the early ‘20s when he creates portraits of princes, rulers and kings of the Union Hall inAlba Iulia.

Nicolae Vermont (1866 – 1932) was a Romanian painter and engraver. He studied at theSchool ofFine Arts inBucharest with Theodor Aman, then in Munchen and Paris. He excelled in the painting inspired by the lives of ordinary people, which he illustrated with deep emotion.

We thank the National Museum of Art of Romania for the support granted in the accomplishment of this postage stamps issue. 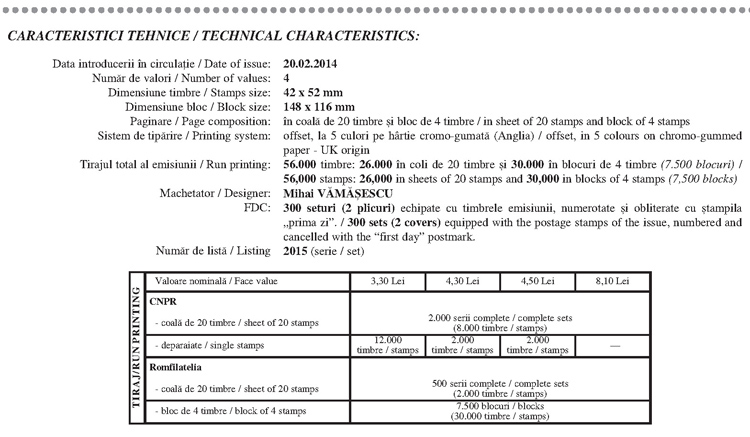