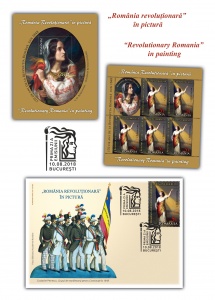 170 years ago, the first major national movement took place in the Romanian Principalities, in the context of the Revolution of 1848, a social and political event spread out in all Europe.

To honour the people and events of those times, Romfilatelia introduces into circulation the postage stamp issue “Revolutionary Romania” in painting, dedicated to the expression of national sense through art. On the stamp of the issue, with the face value of Lei 5, is reproduced the painting Romania Breaking off Her Chains on the Field of Liberty, painted by Constantin Daniel Rosenthal. On the imperforated souvenir sheet, with the face value of Lei 28.50, another Rosenthal’s forty-eighter painting, Revolutionary Romania, is illustrated.

Constantin Daniel Rosenthal (1820-1851) was born in Budapest, in the family of prosperous Jewish merchants. His passion for art was not appreciated by the family, and young Rosenthal became a traveller across Europe in search of artistic inspiration. In Vienna he met the aristocrat C.A. Rosetti and the painter Ion Negulici, who talked with him about the countries over the Carpathians and about the national ideal of the Romanians. He visited Bucharest in the early 1840s, and then left with the group of Wallachian patriots in Paris. He was fascinated by the national pathos of Romanians, especially thanks of his friendship with C.A. Rosetti.

Rosenthal participated in the Revolution of 1848 in Wallachia, sometimes performing dangerous missions. He is the author of the first public statue of the Capital, achieving the Monument of Liberty, set by the revolutionary government in Vorniciei Square, in the centre of Bucharest. He applied for and received Wallachian citizenship and, after the Revolution, he wandered through Europe alongside the Wallachian patriots.

In the Parisian exile, the Wallachian revolutionaries wished to express their national ideal, including through art, following the model of Eugène Delacroix’s famous painting, Liberty Leading the People. The accomplishment of the artworks was entrusted to Rosenthal, a participant in the Revolution, and an eager, from now Romanian, patriot.

In 1850, the artist painted the Revolutionary Romania canvas, which, in time, became representative of the illustration of the national ideal. The artist chose as model her good friend Maria Rosetti, whom she portrayed wearing a folk costume from Muscel region. Rosenthal detailed the elements of the blouse, being the first painter to make notorious the Romanian traditional blouse. At her neck, Maria Rosetti had a rich necklace, expressing the richness of the country, and a tricolour flag was placed over her right shoulder. The tricolour flag is also a symbol of the Revolution of 1848, made up of the combination of the Moldavian (red-blue) and Walachia (blue-yellow) flags. Another important element of the painting is the dagger from the girdle, which shows an attitude not necessarily warlike, but which urges to battle. The look of the character is heading to a group of revolutionaries besieged by the Ottoman army on Spirii Hill, on September 13th, 1848.

Also in 1850, Rosenthal made another painting dedicated to the Revolution, smaller in size, with the title Romania Breaking off Her Chains on the Field of Liberty. In the foreground of the work is a feminine character, in a solemn posture, with the tricolour flag in the right hand and wrapped with tricolour folds. The model of the character is again Maria Rosetti, who is looking towards a light that descends from the sky, and her left hand raises an olive branch, proclaiming the peace. Abandoned in the dust, under the soles, was placed the Russian Organic Regulation, along with the broken handcuffs, a sign of the desire to liberate the Romanians from the Tsarist protectorate. In background, the artist portrayed an assembly of people, gathered in a round dance around a tribune, on the Field of Liberty.

The owner of the two paintings was C.A. Rosetti, who, through will, left them by inheritance to the Romanian nation.

We pay tribute to the patriots who sacrificed themselves for the national ideal 170 years ago, as well as the artists who contributed to the birth of the Romanian nation.

The new issue will be available on Friday, August 10th, 2018, in Romfilatelia’ own shops network in Bucharest, Bacau, Brașov, Cluj-Napoca, Iași and Timișoara and online on https://romfilatelia.ro/store/. The postage stamp issue is completed by a First Day Cover, as page composition there were used a sheet of 32 stamps, a minisheet of 5 stamps + 1 label, and an imperforated souvenir sheet. 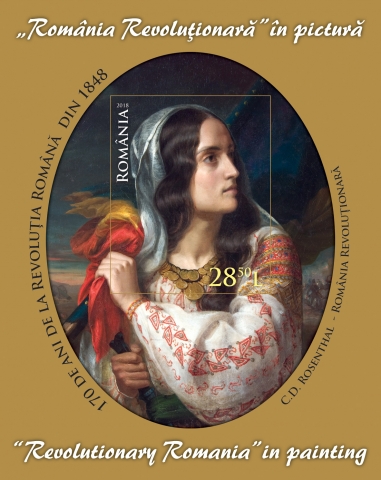 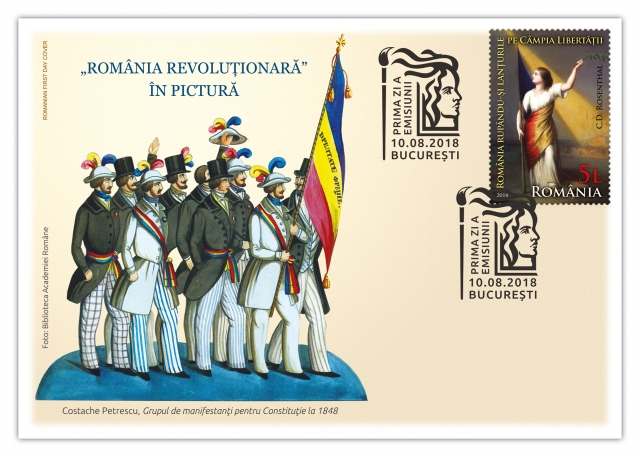 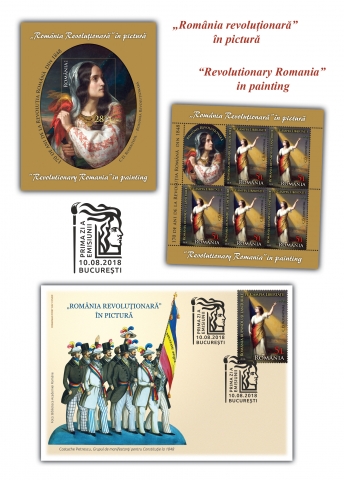 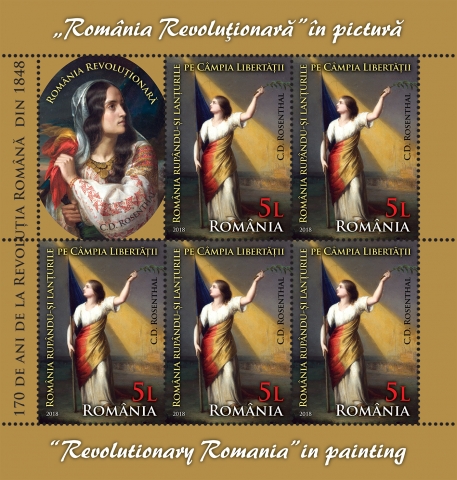 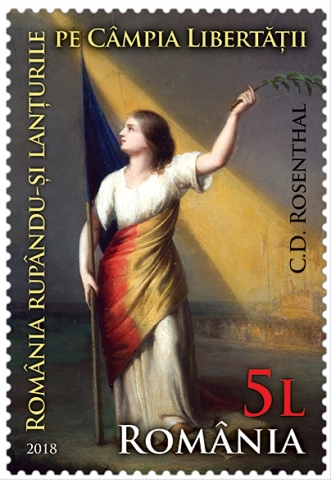