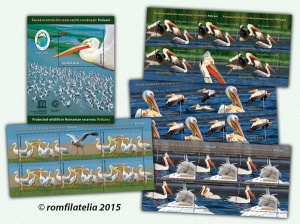 Romfilatelia recalls the richness of the natural heritage of Romania by introducing into circulation a postage stamp issue dedicated to the species of pelicans living in our country, as part of a broader topic consecrated to protected wildlife from Romanian reserves. In the Danube Delta, we can find two species: the Great White Pelican (Pelecanus onocrotalus) and the Dalmatian Pelican (Pelecanus crispus).
The Danube Delta Biosphere Reserve celebrates this year its 25th anniversary. The only delta in the world entirely declared a biosphere reserve and a UNESCO world heritage site since 1991, it shelters an impressive number of pelicans from both species, these birds being declared a natural monument.
The margin of the souvenir sheet emphasises the 25-year anniversary since the foundation of the Reserve and its belonging to the UNESCO World Heritage.
Members of the Pelecanidae family, the pelicans got their name from the ancient Greek words pelekan-pelekus, due to the beaklike an axe. They are large white birds, with large black spots, having a stocky body, a long beak and a yellow-orange bag under it, that can expand. Pelicans are migratory birds that arrive and depart around the spring and summer equinox.
The stamps with face values of lei 3.60, and lei 8.10 reproduce the Great White Pelican (Pelecanus onocrotalus). This is a big European bird species that nests in colonies in Romania, Bulgaria, Greece, Turkey, Georgia, Ukraine and Russia. This birds populations know considerable number variations every year. The Danube Delta Biosphere Reserve shelters around 3,560-4,160 breeding pairs.
Its length is between 140-175 cm, the adult plumage is white-pink, the beak is yellow with a portion of bare skin around the eyes. They fly easily due to their slow wing beats, followed by a gliding motion, the flight being linear.
The pelican feeds on fish and hunts in groups. The pelican cannot dive in water because of its large amounts of air in the plumage and air bags inside the body, and because its fat is liquid like fish oil.
The Great White Pelican is the symbol of the Danube Delta Biosphere Reserve.
The stamps with face values of lei 5.00, and lei 9.10, as well as the stamp of the souvenir sheet with the face value of lei 9.10 depict the Dalmatian Pelican (Pelecanus crispus), one of the two European species of pelicans, the rarest and most endangered, which can be seen in Romania.
The Danube Delta Biosphere Reserve is one of Europes most important nesting areas for these birds, with a herd estimated at about 550 nesting pairs.
The Dalmatian Pelican is the largest of all species of pelicans, reaching up to 10-12 kg and measuring 160-180 cm from the tip of the beak to the tail, and has a wingspan of 310-345 cm. Adults have white-grey feathers, the feathers on the head and neck being wrinkled. It differs from the White Great Pelican by the bottom of the wing which is completely pale and by the grey legs.
Currently, the Dalmatian Pelican has the status of a globally vulnerable species.
Also, both species of pelicans living nowadays in Romania are declared a natural monument, and are strictly protected under the Bern Convention on the Conservation of Wildlife and Natural Habitats.

Romfilatelia thanks the Danube Delta Biosphere Reserve, the Romanian National Commission for UNESCO, as well as the photographers Bogdan Ciungara, Silviu Matei and Daniel Petrescu for the support granted in the achievement of this postage stamp issue. 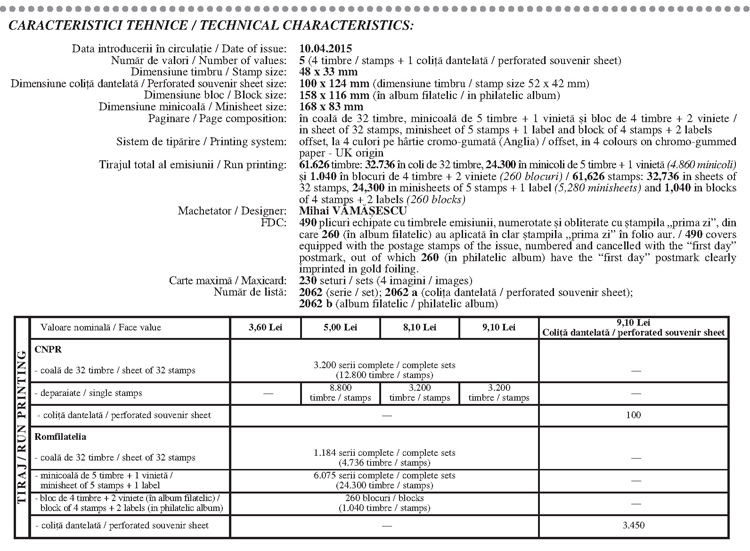