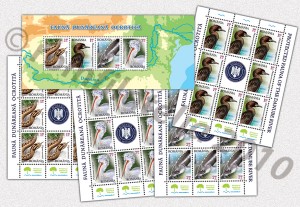 The global warming, the human being’s intervention in nature, the destruction of animals’ habitats due to the uncontrolled development of the building areas, as well as over-hunting, have caused tens of animals to disappear over the past century, including in the hydrographical basin of the Danube.

Considering these issues, the decision to give a new impetus to the Danubian regional cooperation was launched in 2008 on a common proposal from Romania and Austria, joined by other riparian states, including those not-members of the European Union.

The proposal is based on three pillars – connectivity and communications, environment protection and risk management and also socio-economic development – similar to the ones adopted in 2009, as part of the Baltic Sea Strategy, the first EU macro-regional strategy.

The Danube Strategy is foreseen to be adopted during the first semester of 2011, when Hungary will hold the EU Presidency, and aims to keep within the EU new concept on territorial cohesion and to ensure, among others, the development of actions to set up new cooperation in the environment protection in the whole Danube Basin. The EU Strategy for the Danube Region will give Romania the chance of capitalizing the European Union’s policies opportunities in its addressed areas.

Romania is the host country of the last conference on public debate of the Strategy for the Danube Region held between 9th and 11th of June 2010, in Constanta. For Romania, the EU Strategy for the Danube Region signifies assuming the promoter and initiator’s role of a new cooperation format contributing to the sustention of the external engagements at regional level, allowing the economic recovery of the counties in the Danube Basin and creating new jobs.

Romania is a country with a high biodiversity, both at ecosystem and species level, providing specific biodiversity conditions (pedoclimatical and hydrological). Thus, in our country, almost 52 eco-regions can be found, with terrestrial and aquatic ecosystem diversity specific to the costal and littoral zones of the Black Sea, of the steppe and forest steppe, of the hill, mountain, lakes, of the watercourses and their meadows, of the dry areas or the wetlands, including the specific ones of the Danube Delta.

Fauna theme is in the top of postage stamps collector’s preferences and this new issue will complete their collections with the pictures of four protected species: the Meadow Viper (Vipera ursinii), the European Sturgeon (Huso huso), the Pygmy Cormorant (Phalacrocorax pygmaeus) and the Dalmatian Pelican (Pelecanus crispus).

The European Sturgeon (Huso huso) is the biggest sturgeon and one of the most valuable fish of the Romanian waters. Its body appearance is like a thin trunk, elongated towards its head and tail. Its head is smaller than the body and its snout is short and soft. The body color is generally gray, and the abdomen is white. It may live up to 75 years. The sturgeon roe is bigger than the ones of others sturgeons; a female may lay up to 8 million roe.

The Meadow Viper (Vipera ursinii) is an East-European species which has a subspecies (V. u. moldavica), only founded in our country in the Danube Delta and in few small populations in the center of Moldavia. It is strictly protected because is one of the endangered fauna species in our country.

Its appearance resembles the one of the Common Viper (Vipera berus), but the male has a lighter color and it is slightly smaller with a robust aspect; the maximum length is 60 cm. In August, the females give birth to 6 up to 20 young, no longer than 15-20 cm which feed with insects and baby lizards.

The Pygmy Cormorant (Phalacrocorax pygmaeus) is a summer guest bird, especially building its nest, in the Danube Delta; in autumn, it withdraws into the Southern Black Sea, but also in the Northwestern Mediterranean Sea, but in winter nests more and more in Romania, across the Danube and Olt River.

It is usually black with copper hues on the wings and has a coffee brownish head. The 48 cm long Pygmy Cormorant is distinguished from the Great Cormorant by its smaller head, its shorter beak and the longer tail.

It nests with other species, like herons and little egrets, especially in the low willows. In May-June, the female lays 4-5 eggs which it hatches for almost four weeks.

The Dalmatian Pelican is 160-180 cm long (from beak to tail); its wingspan is 310-345 cm and it weights about 12 kg. Currently, there are no more than 400-500 hatching pairs in the Danube Delta. Its color is white-grayish with curly long nape feathers and white-yellowish eyes. It builds its nest in small colonies in the Delta.

The Dalmatian Pelican is an international endangered species included in the vulnerable category species list.

We warmly thank to the Management of the Ministry of Environment and Forest, “Grigore Antipa” National Museum of Natural History and Mr. Eugen Petrescu, the regional representative of the Romanian Ornithological Society Office – in Tulcea, for the documentary assistance supplied in the accomplishment of this postage stamps issue. 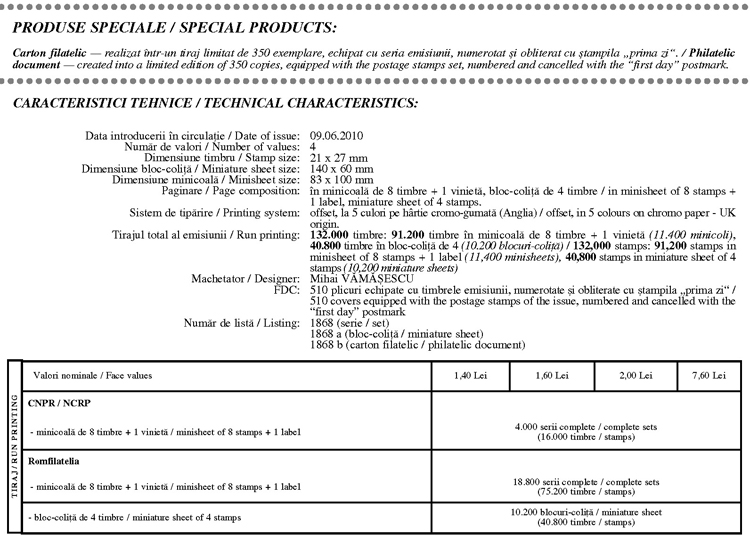